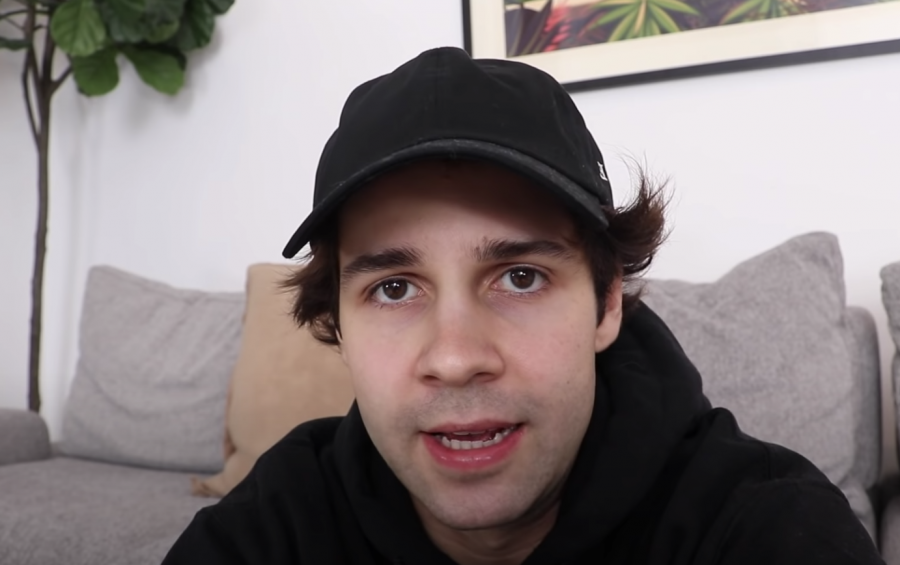 Over the past couple of years, the YouTube community has seen the rise and fall of many internet giants on the platform. From Shane Dawson, Jeffree Star, James Charles, and the Paul Brothers, massive creators have lost thousands of fans after being exposed for horrendous acts. But almost no one expected David Dobrik, the unofficial King of YouTube, to be the next one canceled.

Dobrik joined YouTube in 2015, much later than some of the creators listed above. Similarly to them, Dobrik filmed vlog-style content that let people into his personal life and made them feel like they were a part of his infamous friend group, the “Vlog Squad.”

His videos were short, filled with pranks, and easy to consume. Needless to say, he quickly amassed a large following and many lucrative sponsorships. Some of his following came from his previous use of the now-defunct app Vine, but he has definitely grown a separate audience from Vine.

As of Feb. 2020, Dobrik had more than 15 million followers and a net worth of over $7 million. He became popular enough to collaborate with multiple celebrities, including Josh Peck—a frequent guest in the vlogs—Justin Bieber, Kylie Jenner, and even Jennifer Lopez.

Dobrik’s prank-style videos outlasted the era of actual prank YouTubers like BFvsGF and Sam Pepper, and with his level of celebrity, it seemed as if he was almost untouchable.

The first hint of controversy surfaced in 2017 when Dobrik posted a vlog featuring a member of the Vlog Squad dressed up in Native American apparel while making insensitive jokes. The vlog also featured two of his friends wearing blackface. Dobrik’s audience spoke out against the racism, and he responded in his next vlog by saying, “I’m sorry if you were offended.”

The second hint of rumblings came in 2019 after a member of the Vlog Squad and Dobrik’s friend, Jason Nash, broke up with YouTuber Trisha Paytas, a relationship that sparked drama in the group.

The comments on a re-uploaded version of Paytas’ video are generally negative towards her, claiming that she only spoke out against the Vlog Squad and Dobrik because she was mad about the breakup. Until now, Paytas’ claims about Dobrik largely went ignored.

In summer 2020, Dobrik seemingly began to sense the trouble coming for him, deleted the offensive 2017 vlog, and apologized—vaguely, by saying he, “missed the mark” on some of his past videos—on his podcast for his past racism.

It’s likely that Dobrik didn’t do this because he wanted to, but rather because Seth Francois, a Black man and former member of the Vlog Squad, posted a video a month earlier highlighting clips from when the Vlog Squad has been racist. Francois explained why he compiled the video, saying, “I’m sorry for not speaking up and staying this stuff is wrong. If we can’t be accountable for the stuff we create… then we will never make any progress.” Francois included all of the clips from vlogs that he felt were offensive in an effort to educate his audience.

None of these former incidents garnered much media attention even though they should have. Dobrik was a god, and the YouTube community was willing to ignore his sins.

In early 2021, Paytas brought up Dobrik again on episode 18 of her podcast, Frenemies, with fellow YouTube personality Ethan Klein of the H3 podcast. While the pair doesn’t delve too far into the entire situation, Paytas makes her distaste for Dobrik clear and tells Klein about the entire Tana Mongeau situation. Klein states, “You can’t play with people’s lives for your fucking vlog,” and with that came the beginning of the end of David Dobrik’s career.

As a direct result of this conversation, Klein brought former Vlog Squad member Nik Keswani, better known as BigNik, onto his podcast, H3 After Dark. Keswani was born with dwarfism and is blind in his left eye. Throughout many different vlogs, Dobrik mocked Keswani’s height in his jokes. Keswani admitted that it genuinely hurt his feelings and negatively impacted his mental health. In 2018, Kewswani left the Vlog Squad due to the group’s ableism and bullying.

Then, in Feb. 2021, Francois joined Klein on his podcast to talk about how Jason Nash sexually assaulted him directly under the instructions of David Dobrik—and uploaded the footage to his channel as part of a vlog.

In a since-unlisted video, Dobrik tells Francois, 23, to sit on a couch and close his eyes under the assumption that he’s going to kiss Vlog Squad member Corinna Kopf. Instead, Nash, 45, dons a scary grandma mask and kisses Francois. Francois didn’t consent to kissing Nash and is visibly disturbed in the video when he realizes what just happened to him.

In the interview, Francois admits just how traumatized he was by the incident and how it took him a long time to realize what Nash and Dobrik did to him was sexual assault. Francois asked Dobrik to take the video down multiple times, but instead, Dobrik unlisted it, meaning anyone who has the link can still watch the video.

Dobrik and Nash talked about the “prank” on their podcast, claiming it was the best prank they’ve ever pulled. The pair acknowledged that Francois is from Compton, and Nash states, “As Seth tells it, homosexuality is not so accepted where he comes from. Dudes kissing dudes is not so accepted—at least straight dudes kissing straight dudes.” They also state that there is no way a reaction as “good” as Francois’ in the video could have been faked.

A recent Insider article also revealed that former Vlog Squad member Dominykas Zeglaitis, better known as Durte Dom, sexually assaulted a young woman in 2018 after getting her blackout drunk. This incident happened in Dobrik’s house while he was present, and he used the footage from that night that included the victim’s face in a vlog. While Dobrik didn’t sexually assault the girl himself, it seems that he all but stamped his approval.

As a result of the backlash, Dobrik uploaded a two-minute video last week titled “Let’s Talk” to his podcast channel, which has less than a quarter of the subscribers of his main channel. The title is incredibly ironic when you realize he disabled comments and likes/dislikes for the video, effectively destroying any chance of a conversation.

In the video, Dobrik gives a vague apology, stating that “consent is something that’s super super important to [him].” He also mentions that all he has ever wanted to do is make people happy, and that he’s “been disappointed by some of [his] friends” and their actions.

Six days later, Dobrik uploaded another apology to his main channel where he addressed how bad his previous apology was and how he never should have ignored the allegations against Zeglaitis. This time, Dobrik left comments on, and they seem mostly convinced that he only apologized as a result of losing sponsorships.

After the horrible first apology, fans dug up a 2017 tweet where Dobrik states, “If I left everything in the vlogs that I recorded we’d all be in prison.” While this was likely intended as a joke, it does imply that Dobrik knew that his and his friends’ actions were questionable. Trustworthy people filming wholesome, fun content don’t think to joke about going to prison over it.

The public outcry has led to Dobrik losing multiple sponsors, ranging from DoorDash to Amazon giant Audible, a frequent sponsor of YouTubers. One of Dobrik’s main sponsors is SeatGeek, and after the brand came under fire on social media for not yet ending its partnership with him, they announced they would not be working with him in the future.

But what does all of this mean for YouTube? I’ve been an internet gremlin for over a decade now, and I’ve seen the rise and fall of dozens of YouTubers. Hell, I once, as a minor, hugged a creator named VeeOneEye who later turned out to be a self-admitted statutory rapist.

As an audience, we have a tendency to forget that YouTubers aren’t our friends. In the early days of YouTube, we saw inside creators’ lives and felt like we welcomed them into ours, and those parasocial relationships became normal and almost expected. Dobrik was essentially the last of those creators, even though he came to the platform later. Almost all of the early, welcome-you-into-my-life style YouTubers have fallen off or changed their content, leaving Dobrik as the last man standing.

Dobrik serves as a reminder that the audience sees only a tiny fraction of what a creator’s life is really, truly like. We have no idea who they are in reality. For many of these creators, the adoration of their fans and the power they have over them seems to make them feel invincible. They have more access to their fans than traditional celebrities might, and they have a parasocial relationship with their viewers that makes the audience trust them by default. Dobrik is the perfect example of why creators should not be glorified simply because of the size of their following, or the surface level content they create.

The cancellation of David Dobrik marks the end of the period in time where an audience could trust a creator just because they get glimpses of their daily life. Moving forward, the YouTuber-audience relationship needs to be reworked into something that can’t be exploited and corrupted by power-drunk content creators.