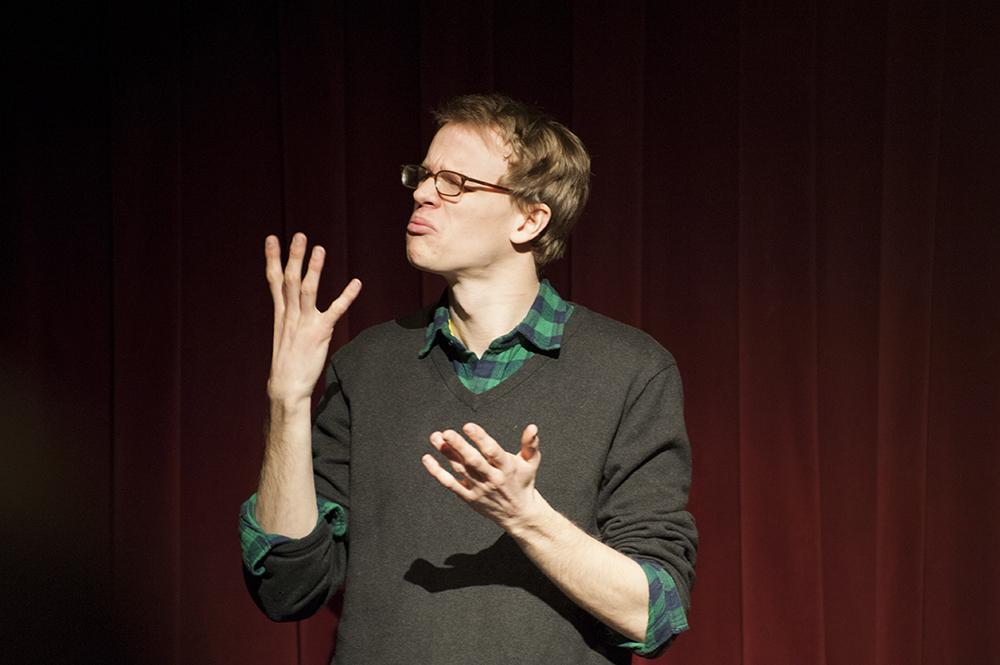 Silence filled the room when Andrew Fisher finished his stand-up performance; the audience members raised their arms and waved their hands in applause for the deaf comedian.

By 7 p.m. the room was packed, with every seat filled and much of the standing room taken. Around 87 people, both deaf and hearing, squashed themselves into the room to witness Fisher’s stand-up comedy.

Fisher began his performance center stage with a microphone in hand. He looked down and handed the microphone over to his translator. He then explained the relationship between interpreter and comedian.

“Usually we have material and we practice together and we go through it once or twice to get a feel for it, and then I perform on stage,” the translator said based on Fisher’s sign language. “Some of you might have noticed his voice is really monotonous and deadpan and really that’s very intentional: we made a conscious decision to keep it that way. We thought it would be a funny contrast with me being so animated and visual while the voice is really monotonous.”

Fisher used these miming actions to heighten his jokes.

“I’m always fascinated by animal road signs, especially the deer signs,” Fisher said. “Why does the deer have to look so flamboyant?”

At this point Fisher struck the pose seen on a typical deer crossing sign.

“It’s like saying the deer is so full of life it doesn’t want to be hit by a car,” he joked.

“I thought it was great. I thought he did a really good job of incorporating his audience of both deaf and hearing people,” Gallagher said. “It exceeded my expectations, and it’s cool that we were the first college he performed at.”

Olivia Moriarty, a junior performing arts major, said she had no idea what to expect when walking into the show, but with a minor in hearing and deafness, she was interested in the techniques he would incorporate.

“I’m looking into working with deaf kids in theater,” Moriarty said. “So it made me think about the performance aspect of deaf actors or deaf performers of any kind, and the role that interpreters can play in a live or hearing show.”

The stand-up portion of Fisher’s show ranged in subject from deafness, to college drinking, to cats, to old people. At one point, Fisher took a break, claiming he needed water, but instead he doused his hands for refreshment.

Fisher said that in his work there will always be lag time between his ASL and the translator, but he believes this doesn’t detract from the humor.

“How we perform, there will always be a delay, so you’ll notice my facial expressions first,” said Fisher. “So for people who don’t understand ASL, there will be that moment of, ‘Wait what is he doing?’ so they start expecting. They are waiting for the funny line, so that when the punch line hits, it’s a double joke.”

After the performance, Fisher played a silent film, which he had made for three reasons. First, he said, it was so the entire audience could share in the deaf experience. The second was so the physical humor would be highlighted. And last, when he hired the sound editor, he didn’t realize the man was deaf.

Fisher said he performs for both deaf and hearing audiences; he just has to adjust the material accordingly.

“Humor is a big part of the deaf community, but stand-up is not really common. Performing stand-up for a totally deaf audience would be more anecdotal, more storytelling,” said Fisher. “ASL is a really beautiful language, and sometimes it can be hard to translate into English.”

Though Fisher was unable to speak for himself, the show didn’t seem to be lost on anyone.  Deaf and hearing alike laughed out loud.

The performance left Andrea Philippou, a freshman writing, literature, and publishing major and ASL member, eager to understand more of the language.

“ASL is such a beautiful, emotive language, it made the performance so much better,” said Philippou. “ASL is not just about the hand gestures. It’s about the facial expressions too. He was so animated and passionate about his story and what he had to tell us that we were able to picture him in those situations. It was so personal, he really welcomed us into his world.”