Deck the dorms with boughs of glitter 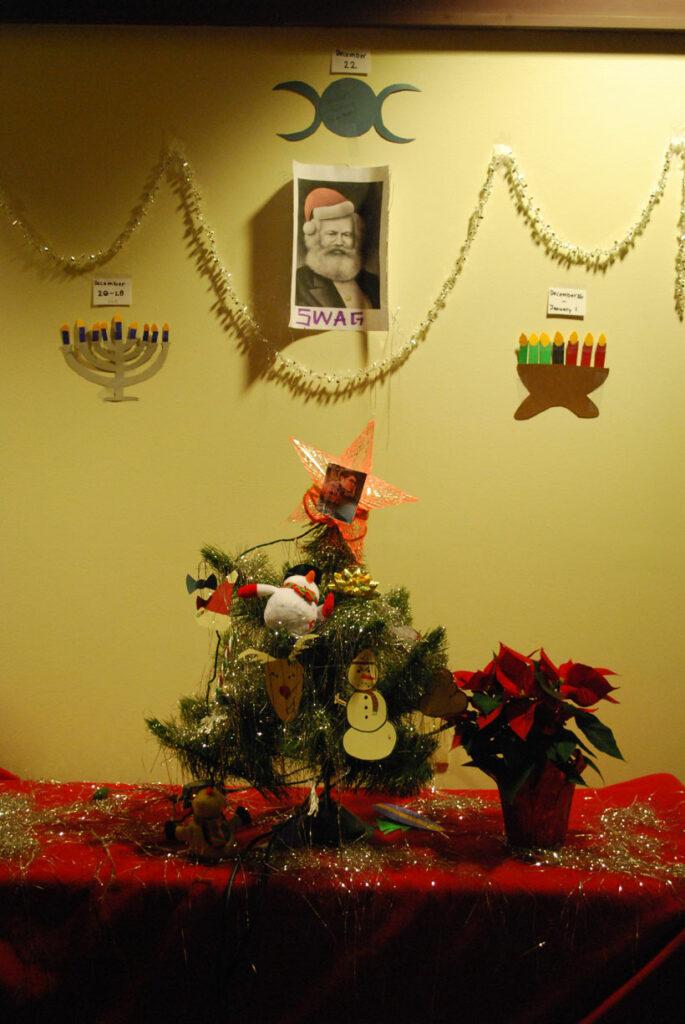 With stockings, tinsel, and lights all aglow, on-campus students at Emerson are decking the halls.

The Little Building’s eighth floor common room is home to the coveted “Ke$ha” tree. The branches are embellished with splotches of glittery tinsel and a giant, shiny turquoise star weighing down the foot-high masterpiece.

Along with the Ke$ha tree, this common room’s interesting holiday enthusiasm spreads from the furnishings to the trashcan, which is wrapped in festive holiday paper. The common room also features a menorah to represent some of the Jewish culture in the eighth floor community.

Rebecca Contreras, one of the brains behind the decorating operation, wanted to bring humor to the holiday cheer.

“We wanted to get creative and have fun. This is what it would look like if Ke$ha vomited all over Christmas,” said the marketing communication major.

Eighth floor RA Dylan Manderlink appreciated the excitement on her floor. She said the decorating process was more of a bonding experience rather than advocating a certain winter holiday.

“I absolutely love the enthusiasm and holiday spirit my residents have,” said the sophomore investigative theater studies major. “[The] eighth floor is really heartwarming, and they reaffirm the decision and commitment I made to be an RA.”

“At home, everyone decorates for Christmas the day after Thanksgiving,” Casselman said. “Why should we have to wait 20 days to [get creative]?”

With the creative holiday combination, the fifth floor also sports an emerald green tree and a giant red stocking, as well as menorah cutouts, providing a space that allows the many facets of winter celebration to coexist.

It seems 80 Boylston St. is home to some of the most avid holiday decorators with door after door covered with festive  decorations. The third floor residents claim to have the most cohesive spirit.  Freshmen Hailey Chavez, Catalina Gaitan, and Kathryn Bennett spruced up their door to resemble an elaborately wrapped present.

Chavez, a visual and media arts major, said she was really excited about the holiday enthusiasm her dorm had.

“My friends at home know me as the girl that has all of the Christmas sweaters and way too much Christmas spirit,” Chavez said. “I was really glad that I got roommates who were just as spirited as I am.”

Their door is an entrance to a plethora of holiday pleasures masking the boring whitewashed dorm. The door itself is wrapped in red and green snowflake paper, complimented by a massive matching bow and stockings bearing each of the roommate’s names.

Once inside, one is welcomed with the warm comforts of multicolored twinkle lights, tinsel, and various holiday trinkets. Bennett, a journalism major, described the “intense” holiday preparation process.

“We got the lights first and then Hailey brought back all of the stuff from CVS for the door,” said Bennett. “Our entire floor is really into Christmas. We have a lot of spirit.”

The third floor also has one of the more extravagant common rooms, complete with a pink Christmas tree, hand cut snowflakes, and gingerbread houses, which the majority of the floor came together to create.

Zach Anderson, resident of the seventh floor of the Little Building, said he took inspiration from the many holiday trimmings in the dorms and brought it to his room, covering his door in metallic blue gift wrapping.

“At home, I was in charge of the student activities committee, and we used to do that to our teachers door,” the visual media arts major said. “People just seem to be nicer and in good cheer during the holidays, and I wanted to bring that to my floor.”

Working around the college’s strict fire safety policies, students have to maintain that inspiration without getting carried away.

According to the Undergraduate Student Handbook, students cannot possess holiday lights or streamers that haven’t been approved by the Emerson College Police Dept., and residents must be careful when pasting up their walls and doors.

Megan Hilburn, a resident assistant on the third floor of the Little Building, said that the students on her floor were careful when choosing decorations that followed the rules.

“Obviously the students need to abide by the hall regulations,” said the sophomore theater studies major. “To my knowledge, none of the decorations are illegal.”

Most students haven’t seen safety as an obstacle to their creativity.

While there may be a Grinch hiding out in the dorms somwhere, Hilburn and Manderlink have not had any interactions and say the student body has, overall, been involved in spreading the holiday cheer.

“[RAs] had absolutely nothing to do with the decorating,” said Hilburn. “No one that I know of was against the idea.”

Boston is known for having many holiday decorations which, according to Bennett, has a lot of influence on the campus decor.

“Faneuil Hall has had a tree and lights up since before we went home for Thanksgiving,” Bennett said. “I’m really excited to see how Christmas-y Boston gets.”

Chavez said the attitude around this time of year has played a role in the level of involvement this year. The ornaments, tinsel, trinkets, and lights, according to Chavez, are simply a residual benefit of the high spirits of the holidays.

“I kind of like how there is a whole season dedicated to being loving and caring and giving,” Chavez said. “It’s the coolest thing ever that for a month, the entire world has the same theme.”