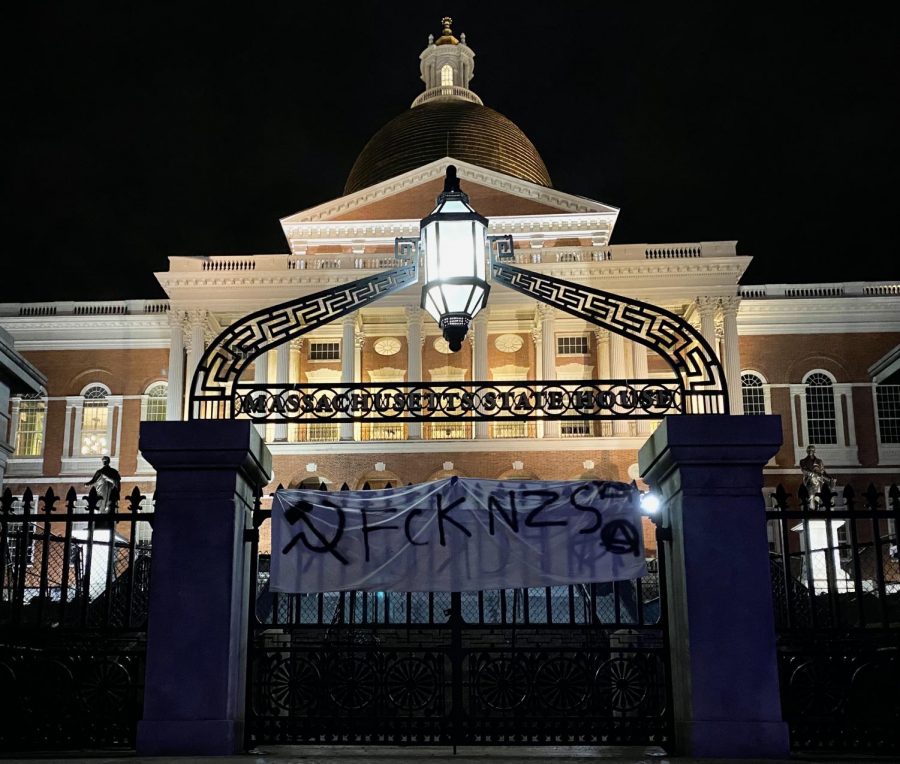 More than 50 demonstrators marched from Nubian Square to the Massachusetts State House Wednesday night protesting the Trump-inspired siege of the U.S. Capitol Building during the certification of electoral votes for President-elect Joe Biden.

The rally, called “Trump Lost Get out Fascists,” convened at Nubian Square in the Roxbury neighborhood of Boston, around 6 p.m.

Castro Del Rio questioned what the response from police would have been had a group of Black or “brown” people attempted an insurrection on the Capitol.

“Would they have even made it to the door? They probably wouldn’t,” he said. “We have a policing system that polices Black and brown people, but they’re not policing white people the same—and today was a good example of that.”

Castro Del Rio said hundreds of individuals from advocacy organizations throughout the city, including Refuse Fascism, Freedom Fighters Coalition, and Movimiento Cosecha organized the protest through a “decentralized group chat.”

The decentralized group was formed out of a need to have political forces who “truly care,” Castro Del Rio said.

“This is what democracy looks like,” he said. “A bunch of people pissed off because things haven’t been going well for them because the state has abandoned them.”

“I join with Americans from every corner of the country to condemn the violence unfolding at the Capitol, and President Trump and his supporters must do the same immediately,” Baker said in his statement. “The chaos now unfolding is the sad but predictable outcome of weeks of attacks, perpetrated by President Trump and his supporters against the democratic process that makes America the greatest nation on earth, and these baseless challenges to President-elect Biden’s victory must stop.”

Trump, in a tweet that has since been removed, asked the “great patriots who have been badly and unfairly treated for so long” to “go home with love & in peace.”

“The president audaciously summoned a multitude of his supporters to the nation’s capital and set them loose like the Furies – the gods and goddesses of vengeance and mayhem,” he wrote. “Their violence emptied the Congressional chambers and sent even those who were there to endorse the fantastical fiction that the incumbent had won the election scurrying for their lives.”

Emerson College Police Department declined to comment on Wednesday’s civil unrest in Washington D.C. or clarify if they were planning any protective measures.

Castro Del Rio said he considered himself a “revolution stoker,” and said this was one of the millions of protests that have taken place in the United States, with more to come.

“We demand police reform, we demand defunding the police, we demand that people are heard, we demand that our taxes are properly invested and that the military budget is cut, and so we can fund education, healthcare and housing,” Castro Del Rio said.