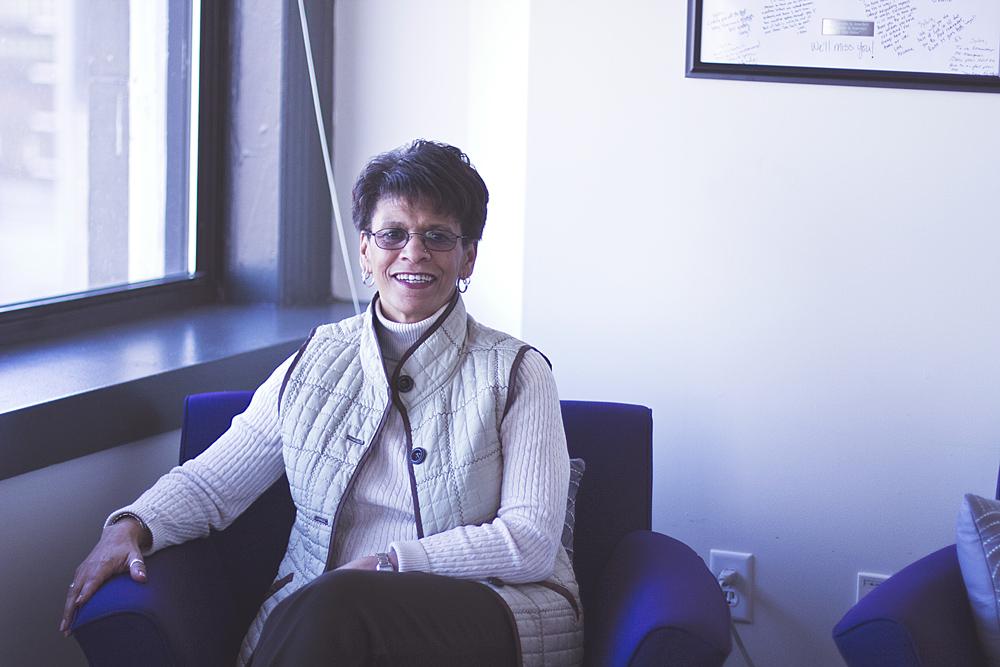 Vice President for Equity and Inclusion Sylvia Spears is set to embark on a new adventure at College Unbound, helping shape what the newly-accredited degree-completion school will look like.

“Being in that mode—building, advancing, growing—is always really exciting,” Spears said. “When I came to Emerson, that’s basically what I was doing—building and growing something that eventually became the Social Justice Center.”

Spears, who is set to become the new vice president for administration and innovation at the Providence R.I. institution, departs after nine years at Emerson. As the only black woman on the President’s Council, Spears worked tirelessly during her appointment in 2012 to create an equitable environment for POC members of the Emerson community, prioritizing inclusivity in all sectors of the college.

She also created the college’s first climate survey in Emerson360, developed the Identity Based Harm Program—allowing community members to anonymously report any on-campus experiences of IBH—and aided former President M. Lee Pelton in the creation of the Elma Lewis Center for Civic Engagement and Research.

“Dr. Spears’ extraordinary leadership has profoundly transformed the college in ways that will endure,” Pelton wrote in a May 18 email announcing her departure.

In light of her departure, Spears said she hopes to see Emerson commit to identifying the barriers that affect students, faculty and staff from marginalized communities.

“There are things that have unintended, negative, and harmful impacts,” she said. “We have to commit to rooting that out—identifying them and changing not just individuals, but the way the campus functions.”

She also said Emerson should continue to address the financial disparities that many students face.

“My deepest hope for Emerson and its community is that it courageously, boldly, and humbly moves toward a transformation that will allow all members of the community to earnestly thrive,” Spears said. “No one should wonder if they have food or [should have to] work three or four jobs while they’re going to college.”

In her final SJC community update, Spears called attention to those who would continue to push the college towards being a truly inclusive institution.

“While I will not be around to see all of the changes that we wanted to see come to pass at Emerson, I know that there are so many kindreds among this community of students, faculty, and staff who will carry this good and important work forward,” she wrote. “I thank you for your labor toward making Emerson a place where people—Black, Brown, Queer, Trans, Disables, First Gen, people without government papers, the religiously diverse, and those struggling finacially—can show up fully in all of their beauty in a beloved community of care.”

With her mark made on Emerson, Spears said her decision to leave was driven by the innovation in higher education exemplified by College Unbound.

“I began my career in higher education concerned about who graduates from college and who doesn’t,” Spears said. “Then miraculously, 25 years later, there’s a college that will revolutionize who has access to college, what college looks like, and who graduates from college—and all of higher education will benefit. That compelling mission is what pried me away from Emerson.”

At College Unbound, which was educationally accredited just last year, Spears said she is excited to help create something from the ground up, much like she did at Emerson with the SJC.

“It’s a little bit like stepping into a startup,” she said.

Spears will serve as chief of staff, responsible for placing social justice and equity at the forefront of the college’s operations.

“It’s a small, scrappy, but growing organization,” she said. “I’m so excited to be in the community with students and getting to know them, what their needs are, and removing barriers to ensure that they can be successful.”

Despite her excitement, Spears said she will miss Emerson students the most—particularly the members of student activist organizations such as Protesting Oppression with Education Reform.

“Emerson students are extraordinary,” she said. “Not just because of their deep creativity, but because of their commitment to equity, justice, supporting their peers who might be having a negative experience, the power of their voice. Emerson students will tell you when something is not working or challenging for communities that are sometimes underrepresented or marginalized.”