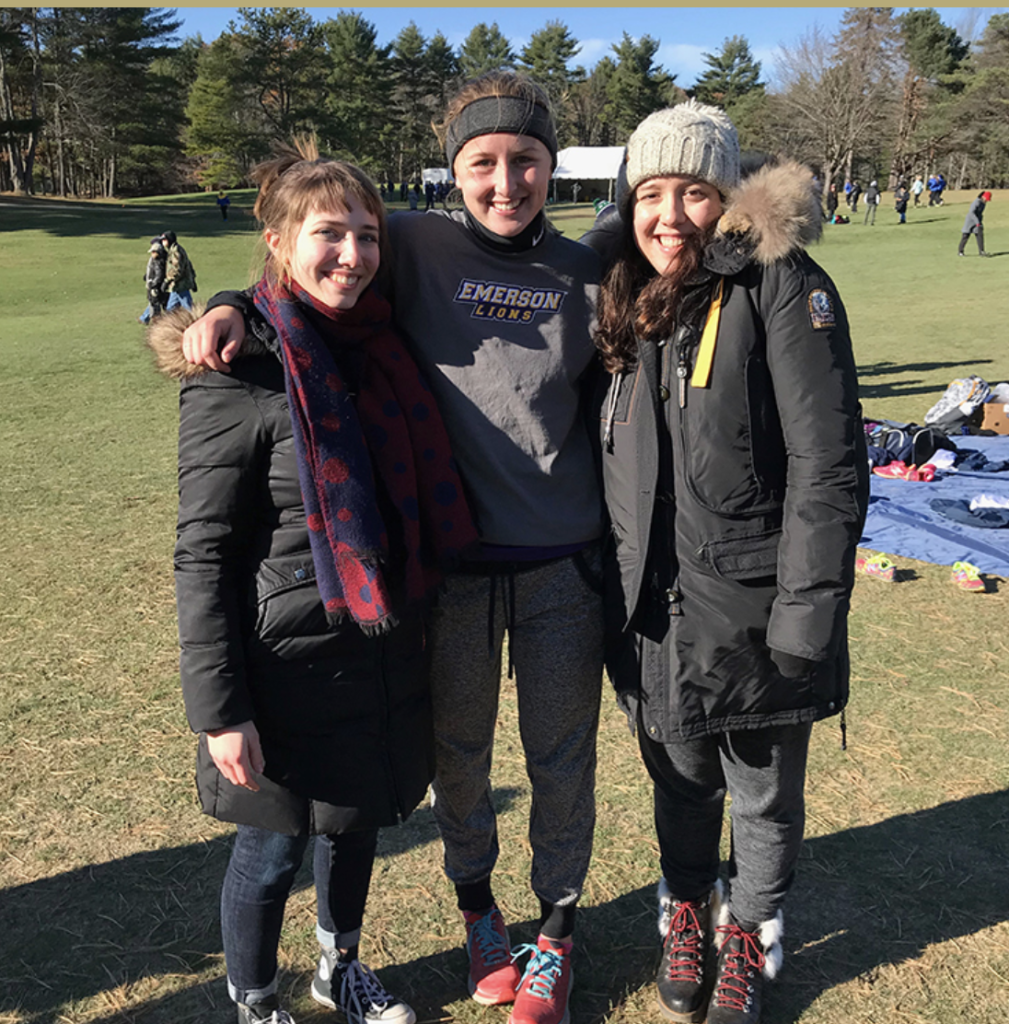 Ashbaugh (middle) poses with friends after finishing the race. COURTESY OF CHRISTINA ASHBAUGH

Cristina Ashbaugh raced in the final meet of her cross country career only 12 days after being hit by a car.

The senior was hit at the intersection of Exeter and Beacon streets while riding her bike home after a practice on Halloween. Ashbaugh said she inched into the intersection while she waited for the light to turn green, when a car accelerated through, striking her and throwing her to the ground. She was in shock, but did not sustain any major injuries.

“It’s great that nothing worse happened, because it could have been something bad,” Ashbaugh said. “My face swelled up quite a lot and it was pretty difficult to walk because my knees broke part of my fall, so there were huge bruises on my knees, but luckily it was not much worse.”

She was treated in the hospital for a fracture in her cheek bone, a right shoulder strain, and multiple cuts and bruises. She said she was lucky she did not get a concussion, as she was not wearing a helmet at the time of the accident.

Ashbaugh still raced in the NCAA Division III New England Regional Cross Country Championships at the University of Southern Maine on Nov. 11 despite being in the accident less than two weeks prior. She finished 273rd overall out of 393 in the women’s 6k race. Her time was 25:41, with an average mile pace of 6:53. She finished third out of all Emerson women’s runners.

“I’ve been running cross country for 11 years, so it was really unfortunate timing that this had to happen before my last meet ever,” Ashbaugh said. “I knew I was going to go either way, but I think I knew three or four days before that I was going to run it.”

Fellow teammate Madison Lynch, a freshman runner for Emerson, said the team was shocked when they heard about the accident because it happened near a place where the team runs. Lynch said she was proud of how Ashbaugh performed at the meet.

“I thought it was amazing,” Lynch said. “Even the fact that she was at practice days after the accident was pretty incredible. The fact that she ran and did well was awesome and shows how strong of a person she is.”

Running the race wasn’t easy for Ashbaugh. She said her injuries affected not only her performance at the meet, but how she prepared for it. Her knee injuries impacted her ability to warm up, as most of the team’s warmup routine consists of high knee stretches. She said her face injuries gave her the most discomfort during the race.

“We were on a golf course, so it had a lot of rolling hills,” Ashbaugh said. “The impact of going downhill at a fast speed really hurt my cheekbone because it was grinding on the little fracture there.”

The San Francisco native has no local family, but she said her friends stepped up and helped her through her recovery process. Jordan Kirby, a senior at Emerson and one of Ashbaugh’s friends, said she was scared even though Ashbaugh said she was fine.

“I think in my mind, even though Cristina was saying she was fine, I had to see it for myself to know she was okay,” Kirby said. “There was panic and fear, but nothing else was important in that time. It was just, ‘Your best friend was hit by a car and she’s in the hospital,’ and you go.”

Kirby, one of Ashbaugh’s sisters from the sorority Alpha Epsilon Phi, was not shocked that she decided to run in her final race.

“Nothing ever stops Cristina,” Kirby said. “She’s just one of those people where nothing gets in her way, and she’s so strong. It was classic Cristina.”

Ashbaugh said she only had one thing on her mind despite the the traumatic event and the recovery she endured during that 12-day span: finishing the race.

“Mentally, I knew that I needed to just finish,” Ashbaugh said. “It’s the sport of cross country in general. You kind of just have to run for 20 minutes and then you’re done, and then you have your glory forever. I think it was just, ‘Try to finish this off on a positive note, because I’m never going to get to do it again.’”