The social division and emotional trauma fostered by Trump’s America 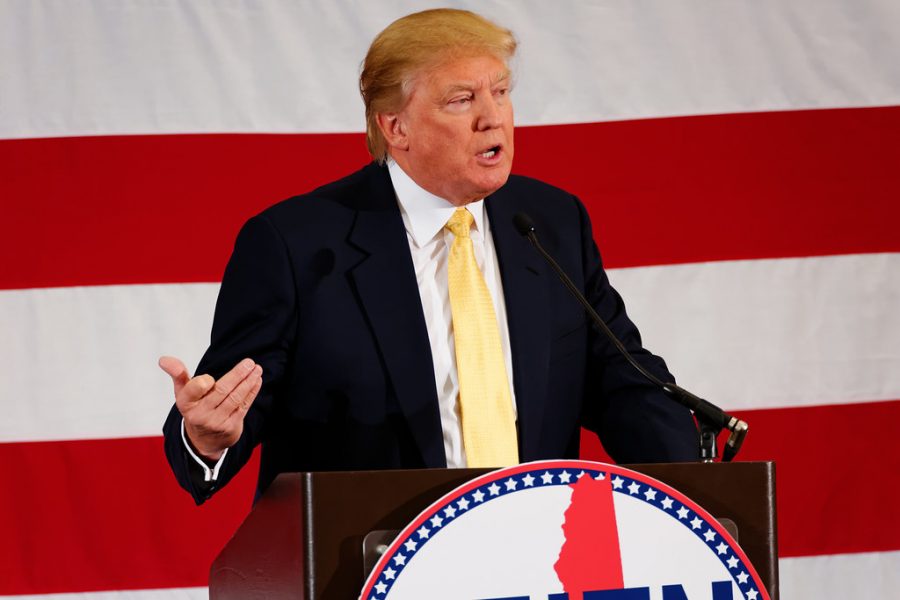 By Katie Redefer and Shawna Konieczny

Four years ago, Americans introduced themselves to President Donald J. Trump by marching onto the streets in defiance, huddled shoulder-to-shoulder sharing hand-knit hats, protesting across all 50 states in the largest single-day protest in U.S. history.

The three million protesters expected the four-year journey ahead to be unsteady. But nothing could prepare Americans for the extent of social division and emotional uncertainty  rampant in 2020.

Eerie silence became the new normal as COVID-19 tore through bustling cities, leaving behind a spattering of disposable masks strewn across sidewalks. Thousands of immigrant children sit confined in cages at the border, separated from their families. Countless small businesses have permanently shuttered due to the worst economic downturn in a century. Black Lives Matter activists are resilient in their demands for racial justice, and yet the only “justice” handed down for the killing of Breonna Taylor was charging one of the three officers responsible for shooting the neighboring apartment’s wall.

The Beacon interviewed eight Emerson community members of varying political backgrounds, including conservatives, liberals, independents, and democratic socialists, all of whom agreed the social divide between Americans vastly expanded over the duration of Trump’s presidency—whether this be caused by Trump himself or factors outside of his control.

President Trump is polarizing by nature. He began his bid for president in 2015 by calling Mexican immigrants criminals and rapists. In a leaked Access Hollywood tape from 2005, Trump bragged about how he assaults women with ease using his celebrity status, uttering the infamous words, “Grab ’em by the pussy. You can do anything.” One could list at length the racist, sexist, and bigoted statements President Trump has made over the years. Yet still, Trump’s offensive remarks seem only to further enthuse his more radical supporters.

At best, Trump’s bigoted comments spawn countless dinner table arguments across the country. But at worst, Trump’s hate inspires harassment, violence, and murder. It is no wonder having a bipartisan conversation in 2020 feels impossible when one side of the argument seems inseparably tainted with hate.

Gregory Payne, the Chair of Communication Studies at the college, likened President Trump to a “divider-in-chief,” saying he has torn apart Americans of differing political backgrounds.

“There’s not a better Divider-in-Chief than him,” Dr. Payne said. “He is somebody who can find something, and divide even the closest of friends. As I said, we’ve lost our civility, and instead of just ignoring things, we take his red-meat rhetoric, and we go after it. And sometimes we destroy relationships and friendships because of it.”

The past four years in the United States have been undeniably marked by instability. In those four years, there has been two government shutdowns, a presidential impeachment, and a global pandemic. Numerous national protests dominated city streets, three Supreme Court justice seats were vacated, at least 100,000 people died from gun violence, and at least 200,000 Americans died from COVID-19-related causes.

Dr. Payne said after Trump’s first term, many Americans “would like to have a nap,” and even compared his presidency to riding a rollercoaster for four years straight.

“It’s like we’ve been at Six Flags on the roller coaster for four years. And each time when you think another hill couldn’t get any worse, then all of a sudden we get another one,” Dr. Payne said. “And anytime you might start saying, ‘gee, we’re in dangerous situations’, [Trump] throws another one at you. So, I think we’re very tired.”

Americans’ daily social media use has piled onto the political exhaustion, while also further deepening the social division. Online platforms can create a digital echo chamber, where specific ideological positions are continuously reinforced while opposing views are automatically rejected, a 2019 study by five psychologists from three separate universities suggests.

“The best communication happens in person when you can hear tone and read body language. And when you’re sitting face-to-face, you need to establish a more meaningful connection,” Kong said. “So, I don’t think meaningful conversations can really happen on social media.”

With greater accessibility to alternative news sources from the internet and online debates, one might expect voters’ opinion of the president to fluctuate more than in previous decades. Yet President Trump’s approval ratings over the years have barely budged, unlike most presidents who tend to see more approval fluctuation, said Director of Emerson College Polling Spencer Kimball.

“The only thing stable in his presidency is his approval,” Kimball said. “It stays at 43, 44 percent. We [Emerson Polling] tend to have it higher than other polls. But still in the other polls, I really haven’t seen much in a long time under 40 [percent], and the lowest it’s been is 38. This is far from what other presidents have,” Kimball said. “Obama came in like the high 50s or 60s, and then it comes down into the low 40s. So there’s some movement. Trump comes in at 44, and now he’s probably sitting at 43 or 45. It’s just very strange.”

The divide between both parties seems to increase more each day, each struggling to piece together the moderate and extremist sides of their party. Allison Payne ‘20, a conservative alumnus who majored in political communications and created the College Republicans chapter at Emerson in 2019, said the divisiveness of modern politics has made some Americans feel out of place. (Allison Payne has no relation to Dr. Greg Payne.) The College Republicans chapter disbanded after Allison’s graduation.

Payne also said that although she still plans to vote for Trump, sometimes people’s opinions of him feel so polarizing, she wonders if Biden winning the presidency would be better for everyone.

“I ask myself all the time, ‘Is it better that Biden wins, like, just for the sake of everyone?’” Payne asked. “I just don’t know, sometimes especially with the scrutiny towards me and my family, I just wish Trump would go away. But I obviously don’t want his policies and everything to go away, so it’s hard.”

The divide between conservatives deepens as Trump repeatedly finds himself in dire controversy, forcing conservatives to ask themselves what remarks are too offensive, if any at all. Meanwhile, Republican voters are left to decide what is most important to them—conservative policies, or defying Trump’s off the cuff remarks.

Senior political communications major Kathryn Smith, a self-identified democratic socialist, said it seems there is no room for anti-Trump conservatives within the Republican Party and that her own aunt and uncle have recently left the party.

“We’ve definitely become more polarized than we previously were, and I think it has changed our idea of what it means to be a Republican,” Smith said. “I have an uncle and an aunt who have been diehard Republicans for their entire lives, and they just recently changed their party registration because they’re like, ‘I can’t be associated with that party anymore.’”

Smith went on to explain that she believes Trump’s presidency has alienated some moderate Republicans from the party, while radicalizing the conservatives who remain.

“A lot of people have either significantly distanced themselves from the Republican party or are holding on much stronger,” Smith said. “There’s not really any room for Republicans who aren’t Trump-Republicans. Because even if you maybe don’t have the same ideals as Trump-Republicans, you still by holding on to that [Republican] title are saying that you, in some way, do align with [Trump’s] values and are not afraid to have that title next to your name.”

Allison Payne, however, said she does not agree with many things Trump has said, but that she prioritizes policies that match her conservative views over Trump’s offensive statements.

“I support Trump to the extent that he enacts conservative policies,” Payne explained. “I do not agree with most of the things that come out of his mouth and or his Twitter. And that’s what’s really hard about a lot of conservatives, too, is that a lot of people will immediately call me a Trump supporter and put me in all these categories, such as like, you’re racist, you’re anti-women, you’re x,y, and z, where it’s like, no, I’m just really talking about his policies.”

However, the fractures within American politics are not limited to one side of the spectrum. The Democrats saw dissent within their own party that began with the public distrust of 2016 presidential nominee Hillary Clinton, and snowballed out of control when the establishment repeatedly undermined former presidential nominee Bernie Sanders over two primaries.

Sophomore political communications major and registered Independent Eric Toalson said he believes the establishment Democrats often ignore the interests of the far-left, hence their aversion to the party.

“The division in the Democratic Party comes from the establishment and the centrist people that control the party just blatantly ignoring the far-left in trying to get by without really taking into account their needs, their wants. And the far left has felt that for decades now,” Toalson said.

“They’ve been trying to advocate for equal rights, better environmental protections, better wages, better work benefits, and they just have been getting shoved under the doormat, basically, and forgotten about.”

In instances like when the Democratic Party nominated former Vice President Joe Biden for President, far-leftists and young voters further distance themselves from the Democrats—some already denouncing voting for Biden in November. Senior political communications major and registered Democrat Allison Valton said it’s unsurprising to her that some far-leftists do not want to vote for Biden because he does little to welcome them to the party.

“The race is too close for my comfort right now,” Valton said. “Democrats are currently lying in their own grave, they dug this hole, this is their bed they’re lying in. This has been years in the making. They played their hand in 2016 when they gave us Hillary Clinton, and it’s been downhill since because they just can’t recover. They can’t recover from the blatant disregard for this large group of people who now feel completely unattached to them.”

However, Valton clarified she believes as a self-identified progressive and a supporter of former Democratic presidential nominee Elizabeth Warren, that not voting as a far-leftist is a mistake.

“It’s a mistake not to vote,” Valton said. “If you have that strong of an opinion about leftist policies, you want to at least move in the right direction, so you should vote for Biden. However, I can see why they feel like that. They feel ignored, so they will not participate. That’s how human nature works.”

Dr. Payne said when he worked for Robert “Bobby” Kennedy’s campaign in 1968 in his early 20s, he was with the campaign on the day Bobby Kennedy was assassinated. Dr. Payne sat out of the election that year, he said, because he couldn’t bring himself to vote for the new Democratic nominee at the time, Hubert Humphrey.

“In 1968 when I was [college] age, Kennedy was killed. I didn’t do anything for like a month. I stayed in my room and I was depressed, and mad, and upset,” Dr. Payne said “People said, ‘We better vote for Humphrey,’ and my response was ‘Humphrey, Humpty-Dumpty, who cares about Humpty-Dumpty? I’m not going to vote.’ And I didn’t vote. And guess who won? Richard Nixon.”

Dr. Payne went on to say he’d give anything to go back and vote that year. As someone who knows the consequences of not voting, he urges young people not to make the same mistake he did.

“I would say, as someone who made that mistake, to anybody that you’re writing to, ‘Do not do as Dr. Payne did. Vote.’ Because when you’re my age, you’re going to live with that each and every day, when you think about what you could have done and you didn’t do,” Dr. Payne said. “Your most precious right as an American citizen is to vote, and you should vote before it’s taken away from you.”