Don’t tell athletes to “shut up and dribble” 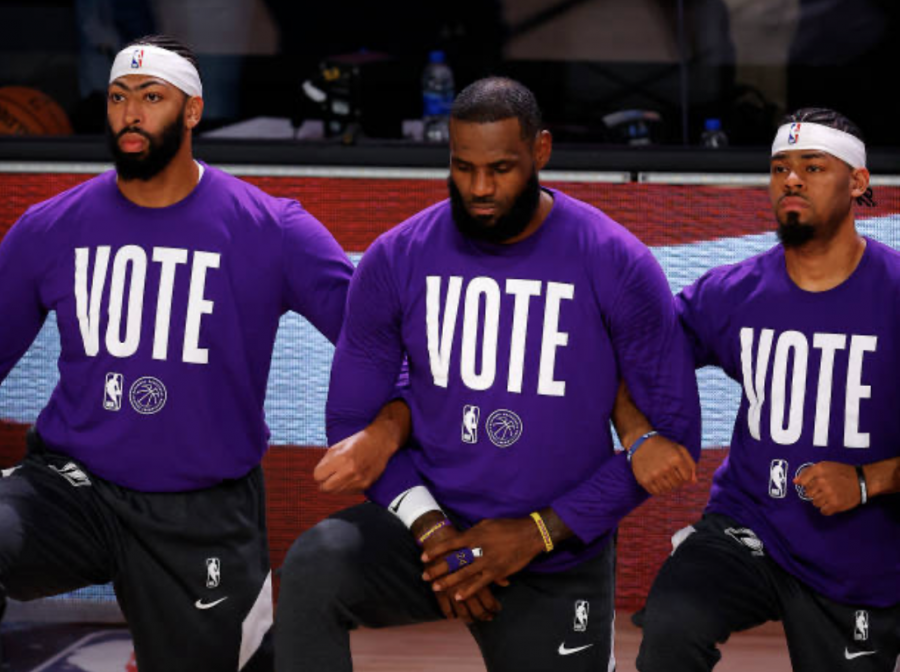 James, like many athletes, has been ridiculed by Republican voices in President Donald Trump’s administration for using his platform to condemn government officials and speak about social change. In February of 2018, James called Trump a “bum” who doesn’t “give a fuck about the people” in a video for UNINTERRUPTED. Following his comments, Fox News host Laura Ingraham said on The Ingraham Angle that she doesn’t want to listen to the political opinion of “someone who gets paid $100 million a year to bounce a ball,” stating James should “shut up and dribble.”

He didn’t shut up. Instead, he dunked on her and his critics, proving it is imperative that athletes must use their platforms to reach millions of Americans and incite social change.

Launched on June 22 following the murder of George Floyd, More Than A Vote is a coalition of influential Black athletes and artists in the country. In addition to James, Boston Celtics forward Jaylen Brown, Kansas City Chiefs quarterback Patrick Mahomes, U.S. men’s national soccer team forward Jozy Altidore, WNBA All-Star Chiney Ogwumike, rapper Offset, and comedian Kevin Hart have all advocated for “combating systemic, racist voter suppression by educating, energizing, and protecting our community in 2020,” according to More Than a Vote’s website.

The organization is directly responsible for recruiting 40,000 poll workers nationwide, converting sports facilities into polling precincts in battleground states, providing discounted rides to the polls, and contributing to the $27 million effort to enfranchise 13,000 returning citizens in Florida. The coalition also partnered with voting groups in swing states like Michigan, Wisconsin, and North Carolina to educate and energize Black voters. Partly due to More Than A Vote’s efforts, Biden received 87 percent of votes among Black voters—the largest amount from any demographic group. As the coalition’s motto states, “change is not made from standing on the sideline.”

During Game 1 of the NBA Finals between the Los Angeles Lakers and Miami Heat on Oct. 1, former President Barack Obama joined the virtual crowd to “thank a great group of first-time poll workers with @morethanavote,” his tweet stated.

“It’s not one of those things you think about, but it is absolutely vital for our democracy,” Obama said about working at polling precincts. “I appreciate , and hopefully all NBA fans will appreciate you when they see those shorter lines at the polling places. Democracy doesn’t work if just a few people do it.”

Obama’s appearance made me realize how important it is for our country to have a president and politicians who openly support athletes’ push for social movements. We’ve had someone in the most powerful position in the world continuously demean athletes in their pursuit for justice the past four years.

Trump infamously criticized former San Francisco 49ers quarterback Colin Kaepernick in 2016 as he led the NFL’s peaceful protest of police brutality by kneeling during the national anthem, saying “maybe he should find a country that works better for him” in response. Then, during a rally in Alabama in September of 2017, Trump stated he would love to see NFL owners fire any player who “disrespects our flag” by kneeling, saying “get that son of a bitch off the field.”

Trump’s bullying of athletes is appalling. Former First Lady Michelle Obama coined the phrase “When they go low, we go high” during the 2016 Democratic National Convention when speaking about the hateful language used by the Republican party against then-Democratic presidential nominee Hillary Clinton. When Ingraham, Trump, and their political puppets went low, James and Co. went high and helped make him a one-term president.

The election of Biden “was just the tip-off,” according to the coalition’s website. Yes, it’s a massive step in the right direction, but there’s so much work yet to be done. America is still divided and deeply wounded from Trump’s presidency, and it will be crucial for athletes to hold Biden and his government accountable to ensure that change continues to be made. They helped lead the change this past week, and they will continue to not “shut up and dribble” as long as they have a voice.