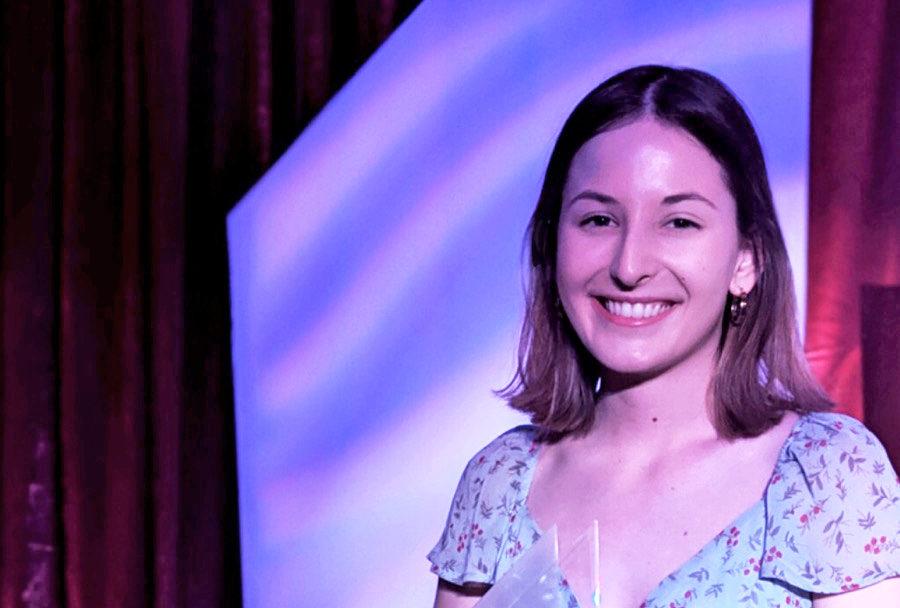 Junior Julia Perry has struggled with an eating disorder since she was a teenager. The lack of knowledge Perry, her family, and her friends had on the topic made treating the condition harder for her to navigate.

After arriving at Emerson, Perry enrolled in the entrepreneurship studies minor and decided to start a nonprofit organization called “Your Mother Never Told You,” an educational initiative that will aim to incorporate non-traditional health topics such as eating disorders into Massachusetts public school curriculums.

Perry, along with 17 other students, will participate in the E3 Exposition next week. At the event, Emerson entrepreneurial studies students will pitch their business ideas to a panel of four judges in under five minutes for a monetary prize.

There are six awards, with first to third place ranging from $5,000 to $2,000. In addition, the Karl Baehr Memorial Scholarship Award of $1,500 and the Clemens Social Entrepreneurship Scholarship Award of $1,000 will be awarded at the Expo. The students will also decide who should win the E3 Entrepreneurial Spirit Award, choosing the student who has shown the most passion and commitment to their business throughout the year, according to the class.

The expo will take place on April 26 from 12:30 to 4:30 p.m. in the Bill Bordy Theater. Anyone can attend the event, and free lunch will be provided.

The judges for the expo include Patricia Cotter, executive director of the Martin Trust Center for Massachusetts Institute of Technology Entrepreneurship; Founder of Windy Films Tripp Clemens ‘13; Director of the Business of Creative Enterprises major Wesley Jackson;  and Leslie Medalie, founder of Leary Public Relations, and entrepreneur and E3 public relations mentor.

Lu Ann Reeb, director of the entrepreneurial studies and business studies minors, has guided this class of students since the beginning of the fall 2018 semester. The program consists of a year-long course in entrepreneurial studies. Reeb does not judge the competition and serves as a mentor to her students.

Reeb, a former broadcast journalist and entrepreneur, said she loves sharing her insights with her class so they can achieve clarity about what to do on their path toward launching a business.

“When I launched my first company I didn’t have an entrepreneurship minor or major,” Reeb said. “I didn’t have those skills to know how to start a business, so I learned by making a lot of mistakes. So that’s why I teach it, because I don’t want students to have to make those mistakes. They might make other ones but I feel like I can share with them some of what I learned the hard way.”

Wombi Rose, CEO and co-founder of the greeting card company LovePop, Inc., will give the keynote speech at the E3 Expo.

“We usually like to find a local entrepreneur who has started a business that is sort of Emersonian—creative but business oriented,” Reeb said. “Wombi Rose’s story is so cool, and it all started here in Boston. He and his partners were investing their own money on it at the beginning, but then they went on Shark Tank and they got an investor and they’re really successful now.”

Perry managed to combine her passion for business with her desire to change curriculum in public schools so teenagers could learn more about topics that it often excludes, such as eating disorders, gender non-binary, gay sex, suicide prevention, and miscarriages.

“I have an eating disorder and it’s something that I definitely didn’t know how to handle, and those around me didn’t know as well,” Perry said. “So that got me thinking I need to do something that educates people on this. And then during Christmas break my best friend had a miscarriage, and she had no idea she was having one. So it’s one of those things where we were just like, ‘How are these things so prevalent but not talked about at all?’”

Perry is in the process of finding directors of education for the five topics she hopes to highlight in the new curriculum. Once she builds her team, she hopes to start contacting superintendents at local public schools to begin implementing the material.

“It’s definitely been a learning and growing experience for me even with my recovery,” Perry said. “If I can empower one person to get better then I can empower myself, too.”

Senior Victoria Raschi will pitch her idea for behind-the-ear hearing aid accessories for children at the Expo. Raschi will decorate and make earrings that are built into the hearing aids.

Raschi took home the award for the Outstanding Business Startup Award at the 38th Annual EVVY Awards Gala on April 14.

“I was speaking to an audiologist who was talking to me about the issues of confidence that she sees with some of the little girls she works with,” Raschi said. “I already had an interest in doing something that involved fashion but that also involved social responsibility and helping people out. It took me back to being a little girl and feeling self-conscious about other things that I couldn’t change.”

Raschi said she hopes to launch her company Hear Buddies in a year. She is working on a prototype and collaborating with Emerson faculty and audiologist Cathy Bakkensen.

“In the end, I want to get FDA approval as well, so that’s a long process that takes a lot of time and money,” Raschi said. “So I want to make sure I work with audiologists now to ensure that whatever I’ve made is up to standards and is as good as it can be.”

As someone who cannot relate to the struggles of her customers, Raschi tries to find a way to respectfully honor the people she’s trying to help.

“The biggest challenges are me relating to why I’m making these hearing aid accessories because I don’t have any hearing loss,” Raschi said. “So for me, I just want to make sure that I’m doing what I can to help and represent those who have hearing loss but also not make it about me.”

Junior Elise Sanchez already launched her personal styling business, P.S., where she styles women on a budget and ships them their clothing. She is working on fine-tuning small details like getting custom packaging to ship out the products.

“I’m going to start doing boxes in May, so if I win one of the awards I’ll spend the money on inventory, marketing, and packaging,” Sanchez said.

Sanchez said she loves that, even with competitive goals in mind, all of the students support each others’ ventures.

“It’s cool because some of us have similar categories and some don’t, but we’re all very supportive. We all give good honest feedback and are always giving ideas,” Sanchez said. “It’s been awesome to see it all come to life because at the beginning, we all had our little baby ideas and now we’re actually fine-tuned, and since the class is a year long, we’ve all become really good friends too.”