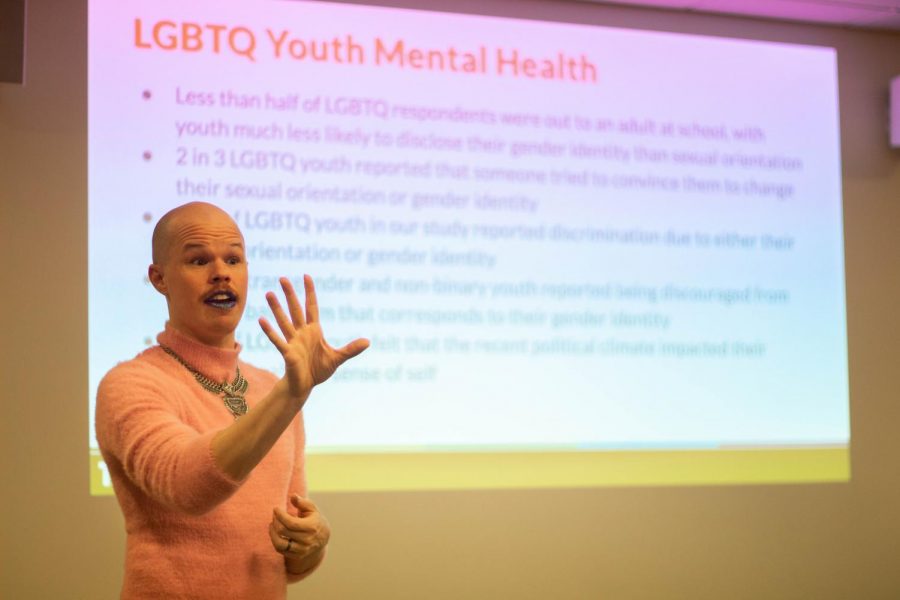 Teary-eyed Emerson students sat in the Beard Room on Feb. 25 and listened to Sam Brinton, a nuclear engineer and LGBTQ+ activist, tell their “elevator pitch to the President of the United States” for ending conversion therapy in America.

Emerson’s Advancement Group for Love and Expression partnered with Active Minds, a network of college and high school chapters centered around mental health awareness, to host the event and educate students on the state of mental health for LGBTQ+ youth in America and the ways people can advocate to create political change.

At the event, Brinton shared a story about how they moved former President Barack Obama to tears. After explaining to Obama the science behind disarming nuclear bombs, Obama asked Brinton what they did in their free time. This is when Brinton said they realized they had one shot to explain their story and the importance of ending conversion therapy.

“It was me telling [President Barack Obama] about realizing that I was gay,” Brinton said. “My parents taking me to a conversion therapist and telling me that I was wrong, that I shouldn’t exist. A conversion therapist literally hooking me up to electrodes to electrocute me while I saw images of men having sex so I would associate that pain with what I was feeling and seeing. All of this happens, [Obama] starts to cry, and I realized that we’ve done it.”

The aftermath included an article in The New York Times two weeks later detailing Obama’s formal stance against conversion therapy, which prompted many states to create laws to fight against the torturing of LGBTQ+ youth. Virginia became the first southern state to ban conversion therapy on March 2, 2020.

“They’re super busy, but they made it very accessible to feel comfortable to ask them to come to our school,” Filippone said.

Filippone then connected with EAGLE’s director of programming, Asa Badalucco, to co-sponsor the event. Badalucco said the whole process took about a year.

“I am an open book about my trans identity and I identify as transmasculine,” Badalucco said. “I thought that bringing someone like [Brinton] in would be specifically helpful because you don’t get a lot of representation of the transgender, non-binary, or gender-nonconforming community on campus in places of power specifically. I thought it would be really important for LGBTQ students to see LGBTQ professionals striving and making a difference.”

Brinton began the lecture by citing statistics from a survey of 34,000 LGBTQ+ youth by The Trevor Project, the world’s largest suicide prevention crisis intervention program specifically for the LGBTQ+ community, and surveys from the government’s Center for Disease Control and Prevention. It revealed that suicide is the third leading cause of death for youth across America and is increasing steadily. Within that, LGBTQ+ youth are four to five times as likely to attempt suicide compared to heterosexual or cisgender youth, due to a variety of pressures that LGBTQ+ youth face in both their schools and their home life.

“When you question our gender identity or our sexual orientation, you are literally questioning whether you should exist. That’s how you get really young youths potentially considering suicide,” Brinton said after explaining that the youngest caller for The Trevor Project is five years old.

Brinton pointed out that they used the word “attempt” instead of “commit” suicide because coroners do not ask about sexual orientation or gender identity.

The Trevor Project is working to access that information and has already helped pass laws where Los Angeles coroners are required to ask those questions.

The organization is not only known for their political work, but also for their services in establishing a call or text hotline where people can chat online with trained counselors if they are feeling suicidal or need a safe place to talk. Brinton said they can use statistics taken from their hotlines for evidence in their political work, and the number of people who reach out to the Trevor Project can be used to show lawmakers what the result of their actions are.

“So a bad bill drops in Texas,” Brinton said. “Immediately my crisis services are getting inundated with calls. I can say to the governor of Texas (and literally did) walk in wearing this dress into that office saying, ‘Here’s 5000 youth who just told us they were about to attempt suicide last night because of what you did.’”

Brinton also discussed other political actions of The Trevor Project. One project created a Model School Policy for suicide prevention because one in three school districts in America do not have the word suicide mentioned in their policies. They also lobby to create laws ending conversion therapy. More than 700,000 LGBTQ+ people have survived conversion therapy in Massachusetts and 20,000 more are added every couple of years.

Brinton attributes their work in nuclear engineering as a part of their ability to make a change in politics.

“The reason we are getting so many Republicans to vote against conversion therapy is because I worked with them on nuclear weapons issues,” Brinton said. “So I literally transferred the trust from one issue over to another.”

Brinton told the audience at the end of the lecture that while they do only get about 7.3 hours of sleep every night and lead such a high-pressure life, they also have learned how to work to take care of themselves.

“For a person who loves to share everything, it can be very powerful and self-empowering to in a situation not,” Brinton said. “You can always google it. You can google my name and you will see all of my story. You’ll see me crying for the United Nations literally just like that. That’s the world and that’s okay because I get to on other days not cry, like tonight. I’m going to get a cupcake from Sweet Cupcakes and go to sleep.”