EBONI examines and educates on misrepresentation 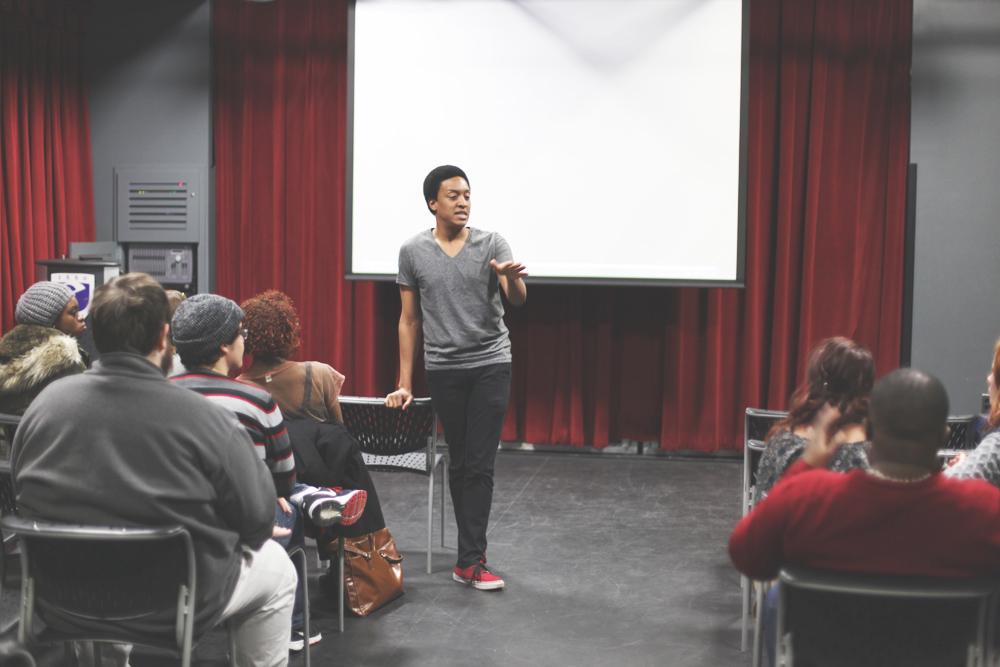 A clip of CNN’s coverage of the “Knockout Game” — in which attackers assault unsuspecting passersby — prompted disappointed sighs from event-goers in the Piano Row Multipurpose Room. While news reports have often framed the supposed problem as widespread among black youth, law enforcement officials have said instances are so rare that it is a minimal concern.

With its “Black In The Media” event, Emerson’s Black Organization with Natural Interests hoped to get to the bottom of the issue of misrepresentation of black people and culture in the media through discussion. The event took place Feb. 25, 2014, from 6 to 8 p.m.

EBONI co-vice president Taylor Jett said one of her personal goals for the event was for, “people [to] start to learn about some of the frustrations of blacks or African Americans toward these representations and where some of these stereotypes come from.”

In recent months, cultural appropriation has become a national hot topic due to events such as the Miley Cyrus Video Music Awards performance, which many claimed blatantly misappropriated specific aspects typically attributed to black culture, such as twerking.

“It’s a big societal conversation that we’re having,” said EBONI president, Donovan Birch Jr., a senior marketing communication major who moderated the event and played a role in the organization of the program itself.

Cultural appropriation entails the adoption of elements of a culture by a member, or group of another culture.

“Everyone is now talking about appropriation and we’re seeing it in other forms and in other cultures, not just people appropriating black cultures,” said Birch. “So I thought it was appropriate to have this conversation now at Emerson.”

Both Jett and Birch said they hoped that students would leave the event with a better understanding of the issues that arise from current representations, or lack thereof, of people of color within different media genres.

Jett, a sophomore visual and media arts major, said that the open discussion format of the event was key in achieving this goal.

“I feel like, as opposed to a lecture,” she said, “this gives a chance for people to ask questions and to educate them more appropriately by alleviating any confusion.”

The questioning was prompted by the screening of four clips, which directly or indirectly showcased the limiting molds that people of color are expected to fit into within mainstream media. The clips also dealt with media sensationalizing black culture.

Birch agreed that having an open dialogue is important. “It’s all about sharing, coming to the table and leaving with greater understanding and knowledge,” Birch said. “and maybe a different viewpoint that we didn’t have before.”

The CNN clip of the “Knockout Game” was of host Don Lemon, a black man himself, unintentionally contributing to the “angry black man stereotype” by acting in part of a demo about self-defense classes.

“It’s frustrating that CNN does not see it as a priority to be conscious of things that actively reinforce stereotypes,” said one audience member at EBONI’s event.

The question of what exactly constitutes as black culture, and the difference between stereotype and actual culture, was also brought up. Many audience members spoke about how the media, as one of the main propagators of specific cultural images, intentionally exaggerates facets of certain cultures.

“I think all of our cultures have the good and the bad,” Tikesha Morgan, EBONI’s faculty advisor and the college’s director of multicultural student affairs, said during the event. “But they’re still ours. I still don’t want it mocked.”

Overall, Birch said he was extremely pleased with the way that the event turned out.

“I thought that it was a great and fruitful conversation and there were differences of opinion and people asked questions so that was amazing,” said Birch. “And it was a discussion, it was a conversation. People were willing and engaged to be in it.”

“It’s made me feel like I have a substantial place in the black community in America just for the fact that I live here,” said sophomore visual and media arts student and audience member Ambavi Longe. “It just basically opened my mind to questions that I almost didn’t feel like I had the right to ask or be concerned about.”