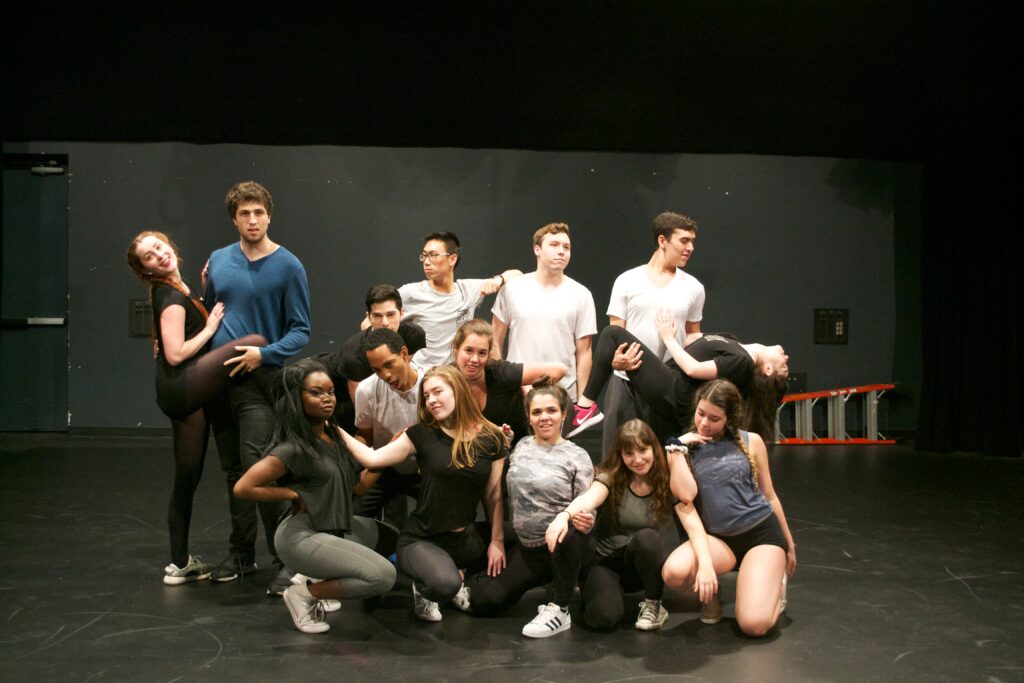 Twelve people dressed in leggings and sweatpants stretched on the floor in a circle. Lexi Lewis, a senior performing arts major, walked over and joined them. She popped a piece of sushi in her mouth and then began to explain the night’s rehearsal schedule to the group.

Lewis is a student choreographer for Emerson Dance Company, and the piece she rehearsed with her peers this past week is just one of the 14 works that will be performed in the company’s  fall show on Thursday night. The theme of the annual performance is “retrospect” and it features nearly 100 different Emerson dancers.

They are practicing in a classroom on the fifth floor of Paramount. With the college’s strict booking procedures, which always only allow students to book studio space the week of each time, the company frequently finds themselves scrounging around for a place to practice. However, today, based on Lewis’s smile—that doesn’t really bother her.

This was the group’s last official rehearsal, and the dancers were working hard to fix their mistakes and polish the piece they have been rehearsing since September.

First they discuss the next day’s run-through at the Semel Theater, the dress rehearsal on Thursday, and then the schedule of the show.

For tonight’s class, they will start by going through the dance’s formations, then fixing the partnering sequence, and then running it multiple times for clarity and practice.

The group goes to start, but first they go around and say their favorite Christmas movies to get warmed up. Lewis grabs her pink notebook filled with notes of formations for the dancers that she’d sketched out in blue pen.

They walk through their formations as the song “Hands to myself” by Selena Gomez blasts from her Macbook. They begin to run through the choreography, but there’s a problem—not  everyone has the routine down completely. Yet.

“We’re fine. We’re fine,” Lewis said to reassure the dancers. “We still have tomorrow and the next day.”

Practice resumes as she begins to go over the final part of the dance for the first time.

“Scoop, shake, shake, step—kick, step, step, look,” she says as she walks the dancers through the movements.

Their feet, some in sneakers others in socks, stomp across the carpet in response.

They repeat these as a group three times just to make sure everybody has them down.

Sophomore communication studies major, Connor Wolff said that he has mixed emotions as  time dwindles before his first EDC show.

“I feel excited, “ Wolff said, then pauses. “I’m definitely nervous. We are still learning some stuff. I definitely do not know the ending. We just learned it five minutes ago. I have to master that.”

The group then gets kicked out by someone who had booked the classroom. No sweat—there is more room in the hallway anyway.

They begin to work on a problematic part of the dance that involves three sets of partners dancing in duets to the first verse of the track. Lewis is quick to notice what is going wrong and even quicker to point to the steps toward resolution.

The group finished rehearsal with plans to reconvene on the actual stage the next day.

On Wednesday they met in the Greene Theater to do two run-throughs and the final fixings.

“Everyone take a deep breath and make a funny noise,” Lewis said as the sweaty dancers began to take their formations for the second run-through. “Slay all day.”

The other pieces in the show range from tap and jazz to modern and fusion and will feature a variety of different music. The show will take place at both 6 p.m. and 8 p.m. in the Semel Theater on Thursday night.