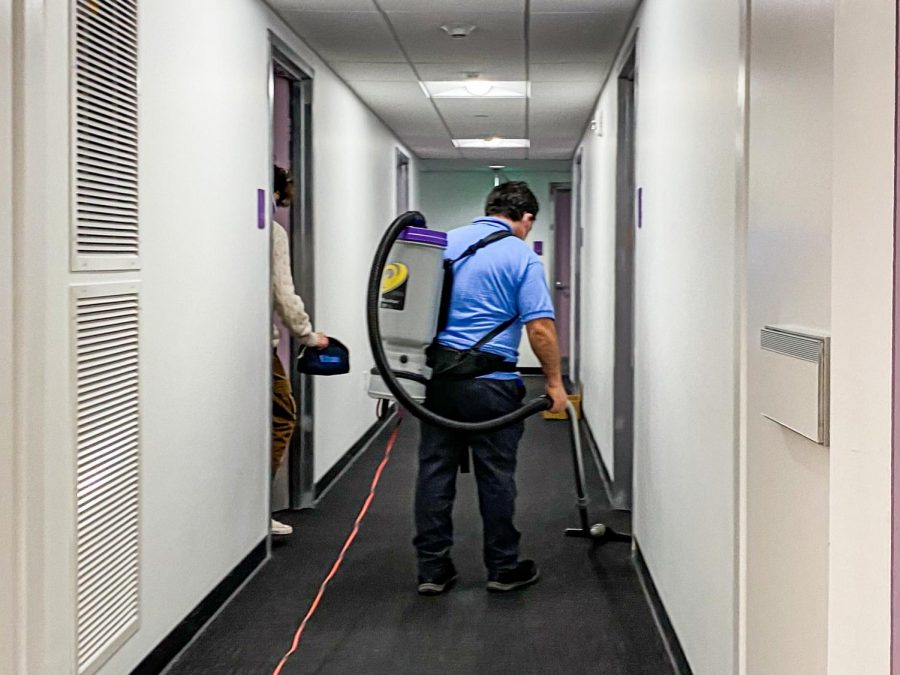 A janitor working in the dorm hallway.

Emerson would be nothing without the hard work of its staff and faculty. They are tasked with cleaning our spaces, providing equipment for us, teaching our classes, and many other crucial responsibilities that keep the college afloat. Yet as the pandemic drags on, the pressure on staff and faculty has only increased—with little benefit to those who put in the day-to-day work of keeping Emerson’s campus alive.

College staff specifically—including institutional technology, academic affairs, and others employed by the college—have been hit hardest by the pandemic. The Beacon reported last month that staff has been overworked during the pandemic and the staff union has been negotiating with college administrators to have benefits reinstated that were revoked at the beginning of the pandemic. Those benefits were sacrificed in order to prevent layoffs.

Some of these cut benefits include an annual 3.9 percent salary increase, travel benefits that they fought two years to earn, and retirement account matches being suspended.

With the cost of living rising in the past year, these wages are not optional for many staffers.

“A lot of us are in a precarious situation financially, and don’t have any savings to lean back on if we either get laid off or don’t get the raises,” union member Estelle Ticktin, an administrative associate in the Communication Sciences and Disorders department, told The Beacon in December.

Shaylin Hogan, vice chair of the staff union, also raised concern for staff affected by an increased cost of living in the December Beacon story.

“Rents go up every year whether or not you get a raise…so say you don’t get a raise in October, and your rent goes up, and you need medication to stay alive…and [you hear] ‘No, we’re not giving you anything extra to cover that,’” Hogan said. “It’s a perfect storm, and we have a number of people who are in that situation.”

Due to the pandemic, it’s understandable that the college has been struggling a bit more than usual within the past year—everyone is. The Beacon recently reported Emerson has lost $30 million in revenue during the past year due to the pandemic. Yes, costs will essentially have to be cut somewhere, but that doesn’t mean it should come out of the pockets of people who work long hours to keep the school’s campus services functioning smoothly. Staff giving up their benefits and yearly raises to preserve the college’s financial standing, is unacceptable.

Without staff members like those who work behind the scenes of the college, Emerson would not have been able to welcome students back to campus this fall and spring. It’s that ability to have students return to campus that has kept the college afloat amid the financial turbulence brought on by the pandemic. Without the sacrifices of staff members—who gave up annual raises, travel benefits they fought two years to earn, two-and-a-half days of vacation time, and retirement account matches to preserve the college’s financial state—Emerson would be in a far greater hole than it currently faces.

However these financial declines are much lower than what the college initially expected. In June 2020, Pelton predicted that due to the pandemic, the college could face as much as $76 million in losses for the 2020-21 school year. Tuition has also risen again for the second year in a row, bringing in an extra $1,052 on average from each student for the fall semester. It’s difficult to believe that Emerson cannot find anywhere else to cut costs, aside from their own staff. Knowing that there would be significant financial losses, the administration had ample time during the summer to figure out a plan for cost redistribution.

And of course, let’s not forget some staff are physically at risk every day. Facilities management Crew Chief John Vanderpol told The Beacon that he is responsible for sanitizing rooms in Paramount that were used for quarantine and isolation for those sick or exposed to COVID-19.

“We know which rooms in the Paramount are positive cases, they give us the minimum of 24 hours or more, where they get out to go back to their dorm,” Vanderpol said. “We know that everything we’re touching or breathing, there’s a risk.”

These are not jobs to be taken for granted. Someone has to keep school facilities clean, and the staff tasked with the job deserve equal pay and benefits. This is the bare minimum the college should be doing, especially in a time in which we are all living in a feeble economy brought on by the pandemic. Everyone could use more financial support, but especially those tasked with sanitizing the school amid a deadly pandemic.

“We were told and under the impression, just before we signed the [agreement for staff benefit cuts], that everybody, staff, faculty, and administration, were not getting any raises at all. That turned out to be not true,” Levine said, “Some faculty got a cost of living adjustment of 2 percent. Nobody else has gotten raises that we know of, but then again, they’re not obligated to notify us of anybody that’s not [staff] union who gets anything.”

Clearly, the college is able to afford raises if some are getting raises while others are not. This begs the question of why some faculty are receiving raises if all college staff are not.

Yet the pandemic hasn’t been exactly rosy for faculty—professors separate from staff, part of a separate union from the staff union. In early March, The Beacon reported that after all classes moved online for the following two semesters, some professors repeatedly faced the same issues: student disengagement, safety concerns, and technology shortcomings.

According to a survey of 273 Emerson faculty conducted in November 2020 by Institutional Research, 14 percent of faculty reported they did not have a computer able to run all their programs and applications needed without freezing up or running slowly, 35 percent reported taking care of others during the time they worked and 12 percent did not have a reliable internet connection.

With the implementation of the Hybrid model, not only do professors still deal with the struggles of online teaching, but they are also physically at risk every day. Not to mention many of them go home every day to their families, and they also will not receive a vaccine from the college.

Staff and faculty shouldn’t have to fight for benefits that were already promised to them, especially during a time where they are much more vulnerable. It’s time that Emerson prioritizes the people that keep this institution running and start by reinstating the benefits cut from staff.