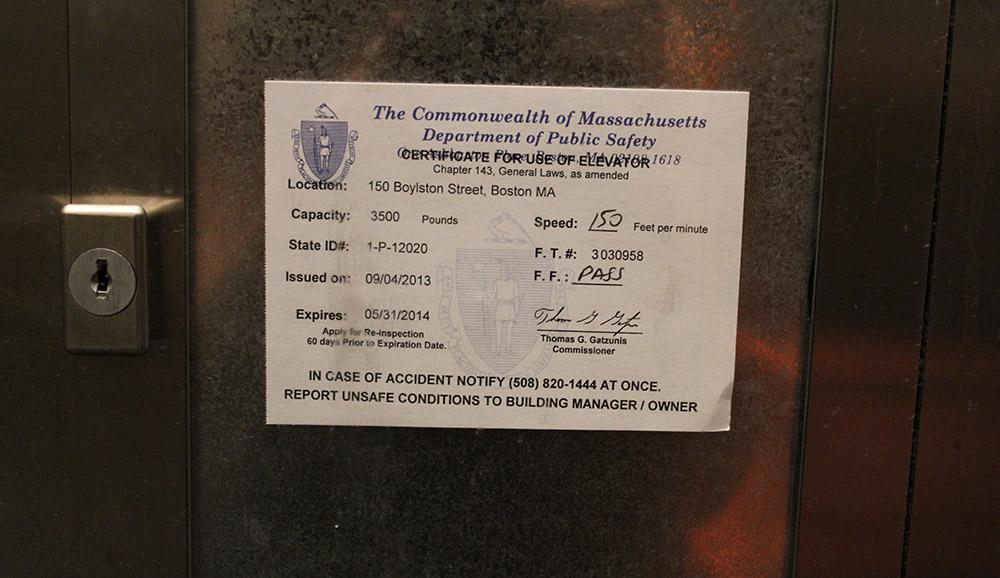 While jammed in an elevator, awkwardly squeezed against the seven other students trying to get to class in the Walker Building at 8:27 a.m., the color of the slip of paper allowing the elevator to run may not cross the mind of a student running late to class. However, the difference between blue and white licenses is the difference between having passed all of the tests required by the state, or only four of the five.

Of the 51 elevators in Emerson’s nine campus buildings, seven have blue licenses instead of white, signaling that all safety tests have not been run or passed, according to Duncan Pollock, director of building operations. The Union Bank Building and the Walker Building both contain elevators with blue licenses.

All elevators in the four dorm buildings have white licenses, as Emerson gave residential buildings and high rises top priority, according to Pollock. To pass inspection, a private elevator company must perform a series of tests on the elevators with a state inspector present, said Walter D. Zalenski Jr., the Department of Public Safety chief of inspections for elevators in Massachusetts, in a phone interview.

Inspections are completed by Delta Beckwith, a private company, Pollock said. Emerson’s current contract with the company began in 2011 and will end in 2016, according to Pollock. He declined to comment on how much the company is paid to complete these tests.

“We’ve been trying to clean up the number of backups, but the numbers of elevators keep increasing and my number of inspectors don’t,” Zalenski said. The inspections go by the date the state receives the application, he said.

Blue licenses still allow elevators to run in full compliance with the state for 90 days after they are inspected, as long as any issue is non-life threatening, according to Zalenski. Blue licenses in Walker date back to April and an elevator in Union Bank failed inspection in February. However, Pollock said that Emerson is still allowed to run them, although they are well past 90 days.

“As long as [Delta Beckwith] submitted the paperwork [within the 90 days]… we’re still in compliance,” Pollock said.

These elevators have been tested for safety, but are missing a test that must take place after midnight with all fire alarms going off. All dorm buildings have passed this fire elevator recall test, Pollock said.

Delta Beckwith is responsible for inspections, and maintenance when needed, plus night and weekend emergencies. It also provides a certified mechanic on campus for 40 hours per week.

“If an elevator is out of compliance, they shut it down right away,” Pollock said.

When a Piano Row elevator was found to have frayed wires over the summer during a routine inspection, it was immediately shut down and reported to the state, and left out of use until it passed inspection, said Pollock.

Elevators that pass inspection and get white licenses are inspected once a year on the elevator’s birth date, according to Zalenski.

“They should have elevators that pass all inspections, especially in an educational institution,” she said.

Nikki Stein, a sophomore writing, literature, and publishing major, also felt that problems with the elevator reflects poorly on the school and how it spends money.

“With the amount of money that we pay to come to Emerson,” she said. “There’s no reason why everything can’t be 100 percent safe and 100 percent done.”