Elma Lewis Center asks “What America Will Be” 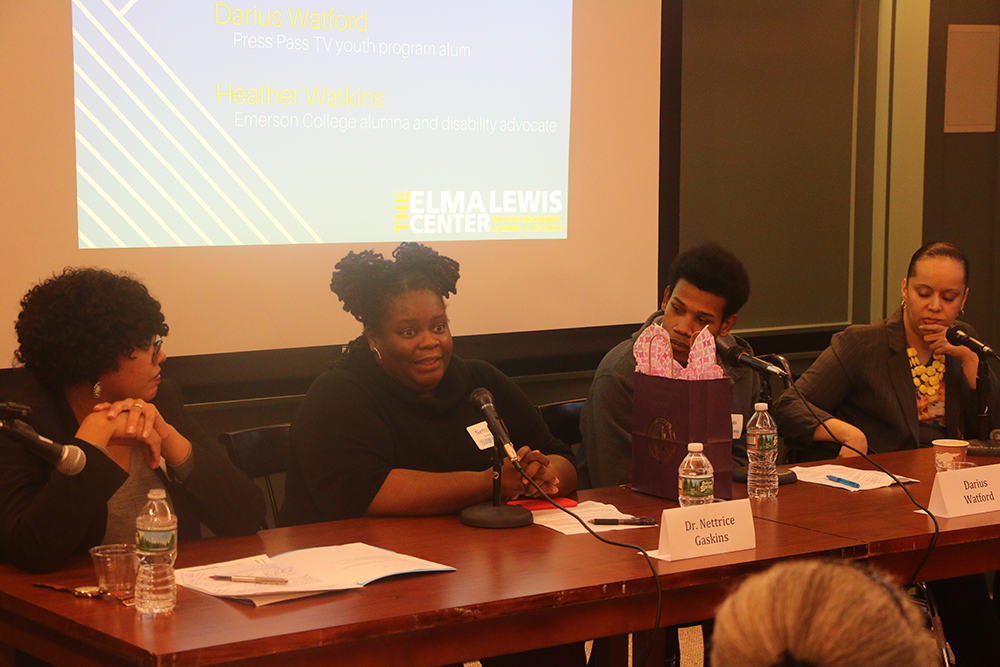 In 1935, Langston Hughes composed the poem “Let America Be America Again.” The piece openly criticizes imperialism, settler colonialism, capitalism, and white supremacy in America, yet still maintains a sense of hope in the country’s future. Over eight decades later, the poem remains relevant.

Last week, Emerson’s Elma Lewis Center for Civic Engagement, Learning, and Research led a panel discussion called “America Will Be,” based on a line from the poem. The discussion, part of the center’s #EmersonVotes initiative, was moderated by Executive Director Judy Pryor-Ramirez and featured three panelists. They touched on a wide range of topics, from education and journalism to equity and representation.

Boston Arts Academy STEAM Lab Director Dr. Nettrice Gaskins, a writer, blogger, artist, and producer, described herself as a “rebel” since childhood and how she, as a black woman, has faced many challenges over the course of her career.

“Opposition has been there the whole time,” Gaskins said. “It doesn’t seem to stop me. It’s about saying, ‘I’m going to create a path where there aren’t any.’”

This spirit and resolve has translated into her work in BAA’s STEAM Lab, which works to integrate art with the STEM fields (science, technology, engineering, and math) to allow for new modes of creation and innovation in education.

Press Path TV youth program alumnus Darius Watford also discussed the importance of education. As a high schooler from Boston, he had the opportunity to work in video production for Press Pass TV. Now, he teaches youth in the position he was once in, helps them find their voices, and empowers them speak honestly and ethically. He discussed how often headlines fail to display the complexity of their stories.

“There are stories put out that are molded and put together that don’t necessarily always speak the truth,” Watford said. “It’s just building up these local journalists to tell the truth. and having people know the power of media and making them media literate, and understanding not to take everything for what it is.”

Disability advocate Heather Watkins ‘97, who graduated Emerson with a degree in mass communication, brought up issues of representation and civil rights. An author, blogger, and former chair of the Boston Disability Commission Advisory Board, Watkins was born with muscular dystrophy.

“I think maybe [people] don’t see the importance of the role that people with disabilities play in the community,” she said. “And this is all kinds of disabilities, not just physical ones like I have, but hidden ones. You can graduate from college, get your driver’s license, have a baby, bake a cake, walk up and down the stairs, do a cartwheel…and you still can be disabled. And there’s nothing wrong with that, because it’s beyond medical diagnosis. It’s an identity marker.”

Watkins also spoke about personally being at the convergence of three different civil rights movements—for women, people of color, and people with disabilities. She is a co-founder of the Disabilities for Divas Project, a supportive sisterhood network representing women of color with disabilities.

“None of that is lost on me, how we come together,” she said. “But what is a head-scratcher for me is that you have to mandate civil rights. You have to tell people how to treat one another…because by virtue of being born, that’s not a given?”

Gaskins agreed, commenting on how the state of civil rights in America has regressed in the past thirty years, and how that is reflected in the current election.

“We have received [from the current election cycle] some things that many thought would not exist anymore happening right now, today,” Gaskins said, “that feel like what we’ve read about [the civil rights issues of] the Sixties.”

Yet all of the panelists expressed hope in the future and the ability of the American people—particularly younger generations—to enact change.

New Director for Intercultural Affairs Tamia Jordan, who has worked with Gaskins in the past,  said at the discussion, “It was kind of what I needed right now…It’s been a long election season.”

When audience members first came into the event, blue slips of paper reading “America Will Be _____” were placed on their seats. Pryor-Ramirez encouraged the panelists and all those in attendance to fill in the blank, putting what they hope or dream America will be.

“Inclusive of all abilities,” Watkins answered, “and accessible to all persons.”

“And what I mean by that is not to be too into ourselves to acknowledge we do live in a good nation,” Watford said, “but to still acknowledge that there are faults that we have that are built in systematically and socially, that we still have to address.”

“I loved the different lenses that each of the panelists brought,” she said, “and also the promise of young people who aren’t fettered by the weight of the past. That young people can create really what America will be.”