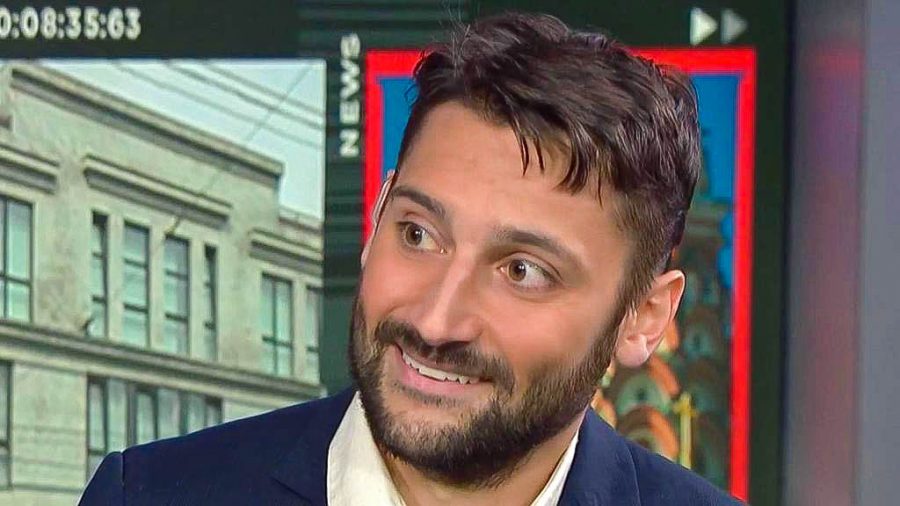 Ben Collins '10 writes about disinformation and extremism on the internet for NBC. One of his most recent articles discusses conspiracy theories that formed around the cancelled Iowa poll.

One morning in August 2015, Ben Collins ’10 woke up and saw the news of Alison Parker—the girlfriend of his good friend and roommate Chris Hurst ’09—shot and killed on live television.

The shooter recorded himself killing Parker while she conducted a live interview for a local TV station. Photographer Adam Ward also died in the attack. Later, when Collins searched for Hurst’s name, he said the first results were complete nonsense.

Collins said the articles and videos on the internet reported that Hurst worked for the CIA, Parker organized her own murder, and the two of them never existed.

Collins then began calling the people who made these video allegations surrounding Hurst and Parker. He found that facts didn’t matter to those behind the videos—they were focused on building an audience based on conspiratorial thinking.

“This was national news, it was a big thing back then because it was horrific. There was a video of it everywhere,” Collins said in a phone interview.

One of Collins’ most recent articles, published on February 3, discusses conspiracy theories formed around the canceled Des Moines Register poll. The newspaper canceled the poll after Pete Buttigieg’s name was removed from the list of candidates read by the surveyor. In the article, Collins explains how Bernie Sanders and Andrew Yang supporters spread false conspiracy theories on Twitter, making the candidates appear more popular than they actually were.

This past October, Collins covered President Trump and Mark Zuckerberg’s secret dinner at the White House, informing the public about details of the dinner. In attendance was Peter Thiel, one of Facebook’s seven board members who helps oversee the company. It is unsure as to why the meeting was not made public.

Collins didn’t anticipate appearing and speaking on television for NBC as much as he does.

“The TV stuff is new and cool. It’s a completely new challenge, I’m winging it every time,” Collins said.

However, he still enjoys going on TV to share details about the stories he covers.

“Anytime I get aggravated by those weird websites like Cable News and TV Clip, and I have to say how bananas things are over and over again, that is the best part of my job,” Collins said.

Collins is currently working on several confidential stories. In addition to those stories, he is working with other NBC reporters who also cover disinformation and extremism to write in-depth stories about the 2020 elections and why people lie to each other.

“Whether it’s getting rich, or trying to sell some sort of political ideology, we can tell you the deeper, darker secret there,” Collins said. “We’re working on two very big stories right now that relate to that, and both of them are two different sides to that coin, but they’re both about deeper underlying ideologies.”

Before working at NBC, Collins wrote for The Daily Beast, a news and opinion website focused on pop culture and politics, from 2014-2018. He covered the Russian disinformation campaign that Facebook and Twitter were allegedly trying to hide. Collins worked with reporter Kevin Poulsen, known as the “White Hat Hacker.” Poulsen discovered how Facebook deleted all groups and events related to the campaign at the same exact time.

In March 2018, NBC Digital News Executive Director Catherine Kim asked Collins to come work for the network. Collins said he planned on staying at The Daily Beast, however, NBC insisted Collins join their team. Collins agreed under the condition he could bring along his colleague from The Daily Beast, Brandy Zadronzy.

“I sent them a list and they were like, ‘Okay, we can bring along this researcher Brandy Zadronzy,’ who is the best reporter in the world. She used to be a librarian, so she knows all these research tools,” Collins said.

During his time at Emerson from 2006-2010, Collins hosted a radio show with Hurst, worked as a co-op for The Boston Globe, and wrote a music column for The Berkeley Beacon.

As The Berkeley Beacon’s music columnist, Collins wrote about a variety of topics, including former senator John McCain’s daughter Meghan McCain’s taste in music in 2008.

“He was very creative in his writing,” Professor Mark Leccese said in a phone interview. “He took chances. He approached things from 10 or 15 degrees off-center.”

Collins said he always had an interest in the difference between internet and real-life culture, but never expected to write about disinformation. He wanted to be a music columnist.

“This wound up sort of taking over my life, and it’s been kind of an incredible five years,” Collins said.

Chris Mathias, a senior reporter at The Huffington Post covering the far right, said his job can be stressful, but it’s reassuring to have a community of people who report on the same topics.

“[Collins] is one of the best people in kind of creating that community and doing that,” Mathias said in a phone interview. “He’s incredibly smart and thoughtful about everything he does.”

Collins emphasized his viewpoint on modern journalism, asking aspiring journalists to stick with their passions.

“Everyone will tell you journalism is about to end and that there’s no such thing as newspapers anymore,” Collins said. “It is not true, things evolve, other things pop up. It happens, stick with it. It’s really good and really useful.”