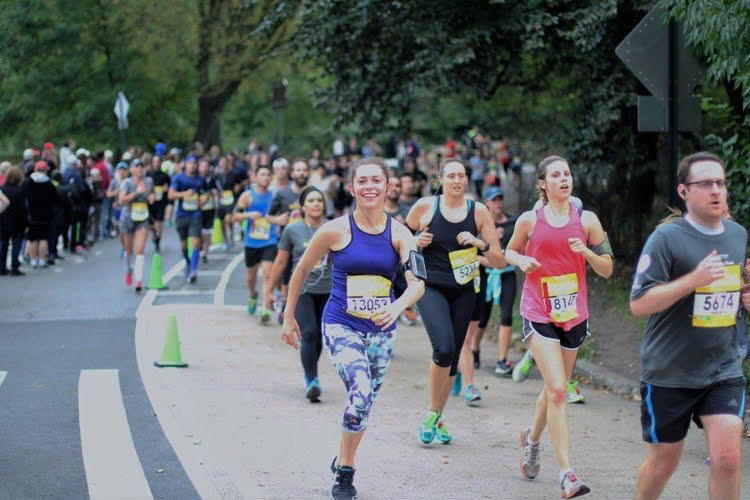 Simone Les ‘15 heard the explosions from the 2013 Boston Marathon bombings while eating lunch on Newbury Street.

“I was still fairly close and could hear the blasts,” Les said in an interview over the phone. “All the aftermath that ensued that day and that week was a really traumatizing experience. One that first marred my college experience, and then became a space for growth and a lot of healing.”

Les decided to use the tragedy as inspiration to pursue long-distance running, and she is now two months away from running the Boston Marathon.

“It definitely influenced my drive to be involved somehow,” Les said. “It felt like my taking part would be me physically overcoming it by crossing the finish line myself. Then I just started picking up running more. I started running longer runs and realized I could sustain longer runs than I thought possible.”

Les graduated with a degree in musical theater and now lives in New York City while applying for graduate schools. Les fundraised for Casa Myrna—a nonprofit domestic violence shelter based in Dorchester—as a member of her sorority, Kappa Gamma Chi, at Emerson. She also began developing a relationship with running, initially working on cardio in the gym until marathons piqued her interest.

“As an Emersonian, you’re in such close proximity to one of the seminal marathons in the country and in the world,” Les said. “I didn’t realize how important it was to people until I went to college and spectated on the finish line.”

Les signed up for her first half marathon in fall 2016. With two full marathons and three half-marathons under her belt, she is now training with the Casa Myrna team under the John Hancock annual philanthropy program, which helps nonprofit organizations gain marathon bibs. Casa Myrna received five bibs this year, and subsequent advertising encouraged Les and teammates Jaime Ramirez, Corey Niswender, Edith Pfister, and Trisha Sheridan to apply.

Runners on this year’s team are planning to raise $12,000 each, and the $60,000 total will be donated to Casa Myrna’s domestic violence programs and shelters. Casa Myrna is available for support throughout the process, but the majority of the responsibility for fundraising falls on the runners.

Carly Ruemmele, a development associate at Casa Myrna, said she helps recruit, interview, and select runners. She said the race provides the team with a great way to give back to the community.

“It matches someone’s interest, running, with a social cause that they really care about,” Ruemmele said in a phone interview. “It’s a good way for people to feel like they’re a part of the community and able to make a difference. They have to raise quite a bit of money, and it’s really impactful for organizations.”

Les said she learned about Casa Myrna’s marathon through fellow Kappa Gamma Chi sisters Ellie Brelis ’17, Lauren Cortizo ’10, and Ellen Rothfuss ’16, who ran on Casa Myrna’s teams in the past. She said watching Brelis run in 2017 influenced her to participate in this year’s race.

“It’s one thing to run the race yourself, but it’s another to watch someone you love very dearly do that,” Les said. “I’d say she had the biggest influence on me, not only believing in running it for Casa but also showing me just how that experience looked.”

Les joined Kappa Gamma Chi, a professional Emersonian sorority, as a junior. She said the organization fostered her awareness and education about domestic violence and sexual assault because the sorority often worked with Casa Myrna.

“I feel like at Emerson it was mostly my involvement with [Kappa Gamma Chi] and fundraising for Casa that did the bulk of education on [domestic violence and sexual assault],” Les said. “Obviously, I’m aware of it. I’m a survivor. I’m not a fan.”

Ruemmele said Casa Myrna selected Les because of her involvement with the sorority.

“She clearly cares about domestic violence and sexual assault and other social issues like that,” Ruemmele said. “We thought that she’d be a great addition to the team.”

Ramirez, one of the other team members, moved to Boston from Texas just over 10 years ago. He works at Metro Credit Union, a nonprofit which has collaborated with Casa Myrna in the past.

“Casa Myrna has been very, very great during this whole process,” Ramirez said in a phone interview. “I’m happy that I’m running for this organization.”

After losing a friend to domestic violence, Ramirez said he gained inspiration to run for Casa Myrna’s team.

“It does ring true to heart because I’m running in honor of a coworker who lost her life due to domestic violence,” Ramirez said. “This is a great organization.”

Les said she does not see philanthropy as her only future career path, but she acknowledged that anything could happen.

“Domestic violence and sexual assault is one of those causes that I do feel strongly about and will probably be something that I put in that whole vein of continuing to devote time and energy and, as much as I can, monetary efforts towards,” Les said.