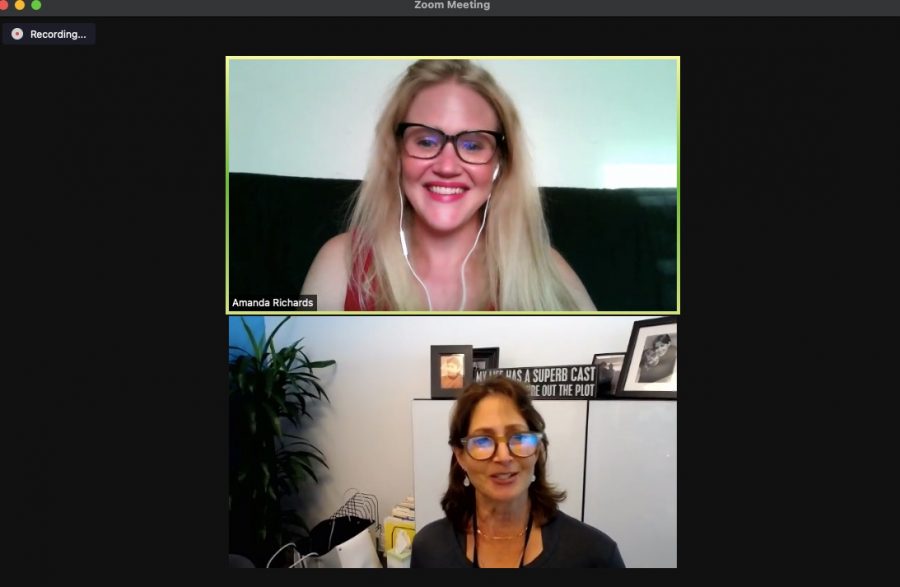 “It’s just so important for anyone at Emerson to realize we have such a strong alumni network, never be afraid to just ask,” Richards said.

Now, at Sony the duo worked to cast the show, which Steinberg described as ranging  from fun to camp. She emphasized the impressive job writers are doing at creating fully three-dimensional characters.

Dubbed the “queen of casting” by her colleagues, Steinberg paved her career at Emerson as a mass communications major. She has now shifted into domestic and international casting as the Executive Vice President of Talent and Casting for Sony Pictures Television. Richards graduated as a double major in marketing and theater and performance, and became Steinberg’s assistant in 2013. She is now the Executive Director of Sony Pictures Television Studios and Casting.

Since Emerson doesn’t have a casting major, Steinberg took up a producing role, which is usually given to theater students, for a spring show because of her love for theater.

“I was a mass comm major, but I also had a love for theater,” Steinberg said. “I was the very first mass comm major to produce the spring drama festival. They had never done that.”

Like the original “Fantasy Island,” the reboot takes place at a luxury resort where guests with deep desires watch all their dreams come true. The show is one of Sony’s several intellectual properties, meaning they have ownership of the title.

Since decades have passed since the show originally aired, “Fantasy Island” needed to evolve with modern day norms. Richards said Sony doesn’t make a reboot just to mean nothing, but rather because they’re enthusiastic about the project.

“We need to have producers or writers that have a different take on something or they’re bringing relevance to it or making it timely for today,” Richards said.

Showrunners Liz Craft and Sarah Fain approached Sony with an interesting take on “Fantasy Island.” The creators wanted to keep a similar concept, but revive it in a unique way, doing so by writing about societal issues.

“You may look at the first episode about a woman wanting to eat, but at the heart of it, it’s a woman with body issues,” said Steinberg. “One of our lead characters came to the island because she was dying of cancer. That also brings up other medical issues in women.”

Richards said a particularly interesting episode involved a character wanting to be in a storybook because they didn’t want to live in reality.

“It’s a really interesting look inside people who aren’t really living in reality, they’re looking at a fantasy already,” Richards said. “It kinda speaks to anyone who’s an artist or a storyteller.”

Steinberg related this concept to the pandemic, with people wanting to get away as uncertainty and fear flooded the world.

“Wanting to get out of the space that you’re in and live in a fantasy, was a really ingenious thing,” Steinberg said.

Though fond of the original, Sony focused on new and better ideas when producing the reboot.

“In today’s day and age, one of the big things for all of us was having two women at the forefront, as opposed to the two men who initially were the stars of the show,” Steinberg said.

The show stars Roselyn Sanchez as Elena Roarke and Kiara Barnes as Ruby Akuda. Elena is the grand niece of Mr. Roarke, the owner of the island in the original show. Kiara acts as her assistant, emulating the role of Tattoo, the original assistant.

“How do you improve something and make it different?” Steinberg said. “It really stemmed from the producers having a take, to Sony liking the take, to going out and selling it to landing in the hands of casting people. We have to work with them to make it special, so that’s what we did.”

Both Steinberg and Richards praised the writers for carefully constructing three-dimensional characters in the eight episode series. “Fantasy Island” is currently on Hulu and Fox Now.

For students interested in going into casting, Richards recommends Googling the Casting Society of America, which has a training program. Steinberg emphasized keeping up with the entertainment world—watching shows or movies, going to a theater, tracking an actor’s performances—to start a career in casting.

“Help people cast student films,” Steinberg said. “If you have a friend who’s written a script and they’re going to cast it, be like ‘Oh, I know this person.’ Help them do that.”