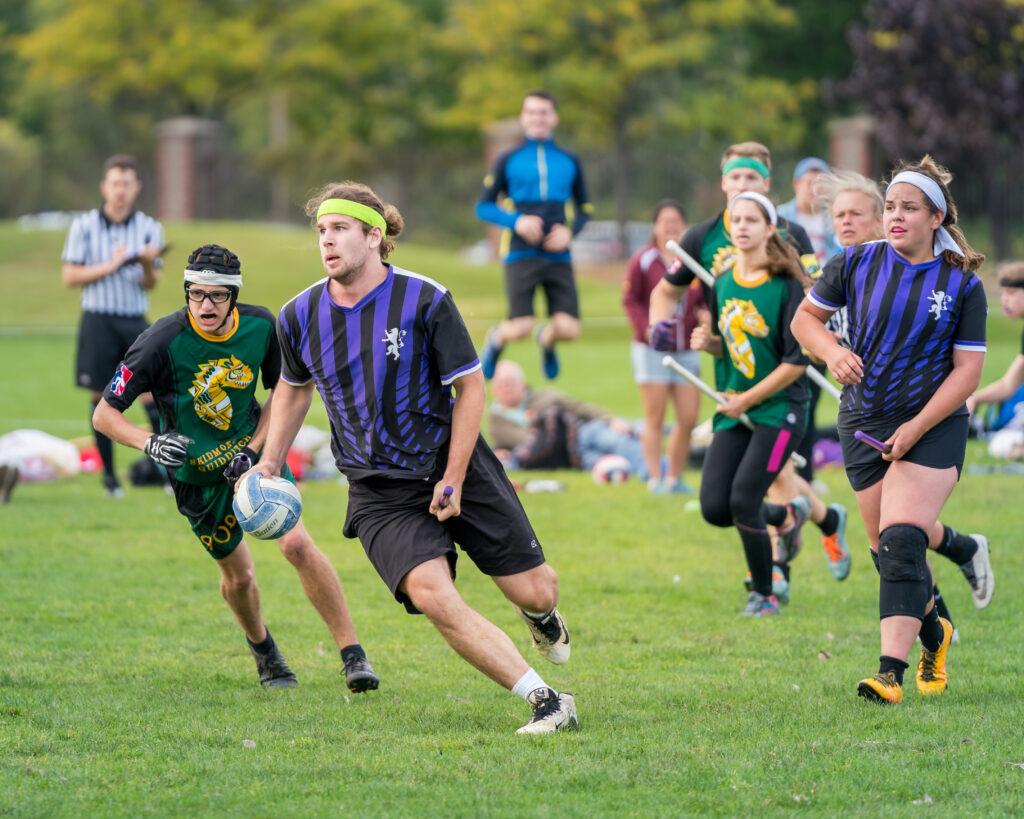 The Emerson College Quidditch team will play in the regional tournament this fall. Photo courtesy of Greyson Acquaviva.

Long before Emerson College Quidditch co-captain Tessa Mullins ever stepped foot on campus, Emerson thrived as a mecca within the newly founded world of college quidditch.

“We had what was called ‘house league,’” Mullins said in an interview. “Quidditch at Emerson was so big that they had an intramural league of Quidditch just in Emerson, so there was like five or six teams that played each other. Then there was a competitive team outside of that that you had to try out for.”

The version of Quidditch played at Emerson is based on the fictional sport created by best-selling author J.K. Rowling in the “Harry Potter” book series. Students brought Quidditch to Emerson in 2008 following its inception three years earlier at Middlebury College in Vermont.

Over the years, Quidditch has grown tremendously at the college. ECQ ranks No. 32 out of 72 teams nationally, according to USQ standings. Senior chaser José Cabrera and head coach Kieran Collier ‘16 are members of the Boston Night Riders, the city’s Major League Quidditch team. Alumnus Tyler Trudeau ‘16 represented the U.S. National Team at the 2018 International Quidditch Association World Cup.

In the “Harry Potter” series, Quidditch is played by two teams of seven players each who fly around a field on brooms. There are four positions on each team—three chasers, one keeper, two beaters, and one seeker.

A team can score 10 points when a chaser or keeper throws a ball, called a “quaffle,” through one of three hoops of different heights on each side of the field. If the seeker catches the “snitch”—the smallest of the three balls used in the game—the team is awarded 150 points and wins the game. Beaters look to eliminate players by throwing a ball called a “bludger” at them.

“Unlike the books, we take out all of the magical elements to it,” Mullins said. “I always like to simplify it down to basketball-rugby-dodgeball; it’s got scoring in it, but it’s also got a dodgeball element to it, and it’s full-contact.”

Everyday Quidditch is played on foot and each player is required to hold a wooden or plastic pole between their legs instead.

The snitch is played by a person with a tail hanging from the back of a yellow pair of shorts. The tail must be pulled off in order to win the match, and the winning team automatically is awarded 30 points. The team with the most points at the end of the game wins.

Eleven years after the sport’s introduction on campus, Emerson is home to a single competitive Quidditch team.

“It was just one of those case scenarios where the people in charge of house league graduated and nobody took over, so Quidditch sort of fell back,” Mullins said.

ECQ is an official member of US Quidditch, the governing body of the sport, and participates in the Massachusetts Quidditch Conference. The team competes against other colleges from the Greater Boston area and in regional tournaments held at the end of October. Matches throughout the regular season are typically held at Harvard University or Tufts University.

ECQ is not affiliated with the Office of Student Leadership and Engagement, so it does not receive any funding or guidance through the college. Therefore, the students are left to run the team and cover all costs themselves.

“We have an eBoard which consists of people who do the marketing, and the treasurer, and all that kind of duties,” Mullins said. “Then we have what we call our ‘gameplay division,’ which consists of me and my co-captain Kat Whalen and our coaches, who are both alumni of the school. We have our head coach, Kieran Collier, and then our assistant coach, Timothée Courouble.”

Mullins said members have to fundraise and pay out of pocket for any expenses the team encounters.

“We never lie to our team and say it’s a cheap thing to pay—there’s USQ fees and travel fees and jersey fees and all these things,” Mullins said. “I say, per semester, you’re probably paying upwards of $200.”

The team currently consists of 18 players—three roster spots shy of the maximum number a team can hold for an event, per USQ rules. With regionals just around the corner, Mullins said the team is willing to accept new players to fill the empty spots.

“We have sort of a rolling tryout policy,” Mullins said. “We do what are called ‘Quidditch 101s’ at the beginning of the semester, and that’s when we’re looking for new players. It’d be complicated to add players right now because we’d have to find a way to get them a jersey, but if anyone wanted to join we’d be open to it.”

Senior chaser José Cabrera said the sport’s uniqueness is his favorite aspect of the game and that it could draw in other students.

“Quidditch is something that everyone starts knowing nothing about it, so it’s about how quickly you can learn the rules, and in a year or two, you can be one of the top players of the sport,” Cabrera said in an interview. “I think a lot of people think that quidditch is a silly nerd thing, and that is how it started off, but it’s become such a true sport.”

Mullins said having a non-school related activity in her schedule is an advantage of playing for ECQ.

“It’s really nice to step back and do something that has nothing to do with the stress of school, or the stress of finding an internship, or my job or whatever it is, three to four times a week,” Mullins said. “I can take myself out of that and do this thing that’s not related at all and have fun.”

Mullins said there are other perks to joining the team.

“This is a fun way to stay active, it looks great on a résumé, it’s the easiest conversation starter, and it’s an atmosphere that’s like you’re playing a sport, but that’s not the focus of it,” Mullins said. “And, obviously, if you love ‘Harry Potter’ you’re going to probably love this.”