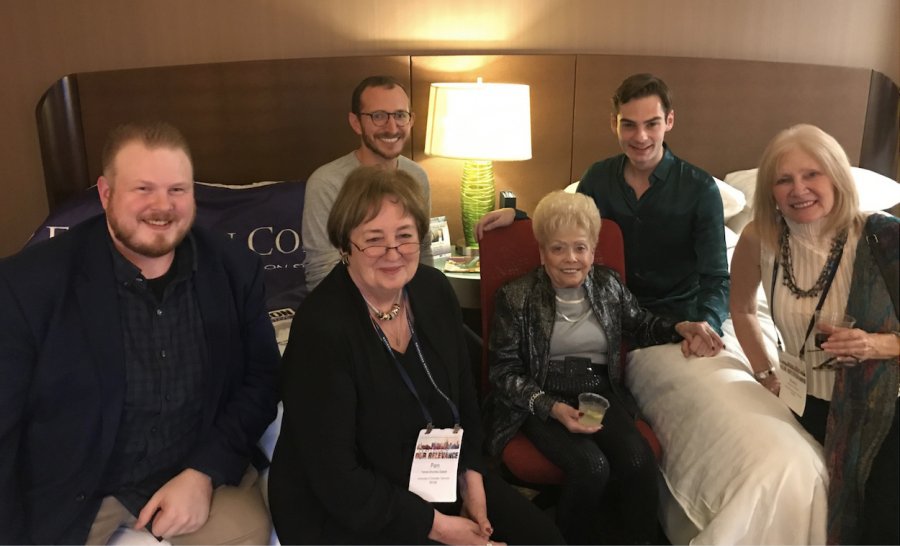 Trent (center right) was remembered as a pioneer in the field of Political Communication.

Dr. Judith Trent’s only official post at Emerson was as a guest lecturer in 1996. But to many in the School of Communication, she will be remembered as much more.

Trent passed away on Nov. 26, in her hometown of Oxford, Ohio, at 80 years old. A tenured professor at the University of Cincinnati, she was well known by political communication scholars at Emerson and beyond for being a towering figure in the field.

Though she was never a faculty member, Trent served as a guest lecturer in the Department of Communication Studies and often visited Emerson for conferences and summits. She regularly visited every four years before her research trips to the New Hampshire presidential primaries, where she conducted some of her most distinguished research.

“She was definitely a friend to the college, a friend to the department,” Spencer Kimball, an assistant professor of political communications and director of Emerson Polling, said.

Trent worked as both a consultant and an observer for local and national political campaigns and closely covered presidential contests beginning in the 1980s—to the point of personally hosting former President George H.W. Bush in her graduate school classroom. In her analysis of the 1988-1996 New Hampshire primaries, published in the American Behavioral Scientist journal, she explored the concept of the “ideal candidate,” who would appeal to both the media and the electorate.

Vito Silvestri, professor emeritus of the School of Communication, recalled his astonishment upon discovering the sheer number of publications Trent had contributed to when first meeting her.

“What impressed me about her was how she understood things rhetorically, and [at the same time] from an empirical, experimental point of view,” Silvestri said. “She became an expert in both, which are difficult things to straddle.”

According to Kimball, Trent’s background in forensic rhetoric allowed her to explore the intersection of language and policy-making that defined the newly-emerging area of political communication.

“She really helped create the discipline,” he said. “We [at Emerson] honored her because she really was a pioneer and a trailblazer in a field of study that I think we’re finding important today.”

Kimball said he first heard of Dr. Trent when he was still in college at the University of Hartford, and her influence helped him gain interest in the field.

“That’s where I got interested in [political communications],” Kimball said. “I was reading her work. And I got the chance to meet her back when I started teaching at Emerson, about 20 years ago.”

In many ways, Trent’s accomplishments were larger-than-life. Yet her colleagues at Emerson painted “Juddi,” as she was known, as a thoughtful, friendly, and approachable woman.

“She had the kind of reputation that gave people access to her,” Silvestri said. “That was her personality. She was gracious, she listened well, she freely gave advice. She wasn’t a big ego, like people can be in academia.”

Kimball reminisced that Trent’s outsize stature in the academic world was in contrast with her unassuming physical presence.

“She wore her hair up in a beehive, and she was not very tall,” he said, laughing. “Sometimes, you didn’t see her but you could see the hair coming down the hall. That was Juddi. It was like her signature thing.”

Trent’s impact at Emerson was not solely among the faculty. Kimball said that the strength of the college’s political communications program is in large part rooted in the foundational research she initiated.

“I don’t know how many political communication programs there are in the country right now, but it’s a small number,” he said. “You’ll see that it’s a growing field because of the work that we’re doing. And she pioneered that work.”

As a guest lecturer at Emerson, she was also able to connect with her students on a personal level.

“She was so grounded in research, but she wasn’t an isolated person at all,” Silvestri said of her relationship with her students. “She enjoyed the moment as she taught. And people liked working with her, which is a great compliment.”

Kimball said that, just as she tried to find the “ideal candidate,” Trent would be remembered as the “ideal professor”.

“I remember her sitting in the Little Building, up on the second floor, talking to a group of 60 students, “ Kimball recalled. “She had a lot of passion for the subject matter. She would spend a lot of time with students—listen to what they were doing, and try to give them feedback.”

“She’ll be well remembered by them,” he said.