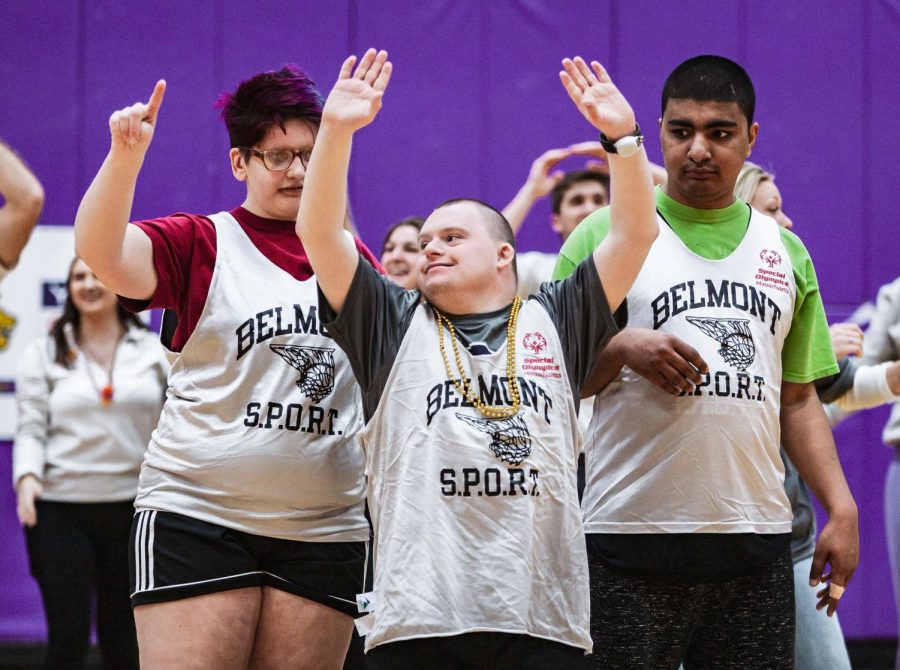 Belmont Braves players dance during halftime of the Special Olympics tournament in the Bobbi Brown and Steven Plofker Gym Sunday.

Liz Saville watched her team members run up and down Emerson’s basketball court with smiles on their faces as about 100 people cheered them on Sunday and she said the experience meant everything to her.

Saville is the head coach of the Belmont Braves, one of three Special Olympics basketball teams that played in the Bobbi Brown and Steven Plofker Gym Sunday. The Student-Athlete Advisory Council coordinated the event, and Saville said she was impressed by how it was run.

“It is very well organized, props to Emerson,” Saville said in an interview. “This day makes a huge difference for them, and they will remember it. If you couldn’t tell, they all love being on live TV.”

Emerson Channel Sports broadcast the three games, and senior Sam Knox interviewed athletes at halftime. Knox also served as the Public Address Announcer for the event and said he loved the experience.

“It brightens everyone’s mood,” Knox said in an interview. “It’s fulfilling. It just makes me so happy because it’s the littlest things that make these kids’ days.”

Saville began working with Special Olympians in college and said the organization provides a unique opportunity for the athletes.

“A lot of them are in a situation where this is one of the only things they’re able to do to run around and get to see each other every week,” Saville said. “It’s really important to me that they’re able to just have fun and play, and I think all of them really love seeing each other when they get to play.”

“It gives him social interaction with kids or young adults that are just like him,” Tierney said in an interview. “He is not striving to be like someone else, he can be himself.”

During the halftimes of the games, the athletes and Emerson students joined together to dance at mid-court. Senior Quinn Madden said the SAAC did a good job of marketing the event, which led to many Emerson athletes attending the event.

“It’s so much fun getting everyone together to do something like this,” Madden said in an interview. “It brings the athletic department a heartwarming sense of community. We did it a couple of years ago, and I just remember a lot of the parents of the players saying how much the kids loved it.”

Emerson hosted a Special Olympics event in 2018, but SAAC President Sam Willinger said he wanted to make it more of a campus-wide event this year.

“The hardest part for us was getting the word out and building that infrastructure originally of how we can use our social media platforms and really get the word out to people, so they know to come out to these games,” Willinger said in an interview.

Once Willinger finished planning the event, he said he felt the magnitude of what they prepared when he was finishing setting up Saturday.

“I was standing, putting some streamers up, and I look back and I saw all of the SAAC members that have been coming out to help on a Saturday night, willing to give their time and promising me they were going to be here the next day,” Willinger said. “I think in that moment, I was like ‘we accomplished something really cool.’”

Willinger said his past experience working with special needs kids as a swim instructor at the YMCA motivated him to find a way to support them at Emerson.

“I’ve worked with a lot of special needs kids before, and events like these are great for us, and we love we love to do them, but it’s really something special for them,” Willinger said. “This is something that’s easy for us to do and something that we can accomplish that has a bigger impact on these people’s lives than we can really understand.”

The event ended with an awards ceremony where each athlete received a certificate commemorating their participation in the event. Tamara Joseph, the mother of one of the Belmont Braves, said Special Olympics creates an inclusive environment for her child.

“When he was on a non-specialized team nobody would pass him the ball, no one would talk to him, and it is because he is different,” Joseph said in an interview. “Being on a team like this where he can really be valued and be a part of it, it’s huge.”