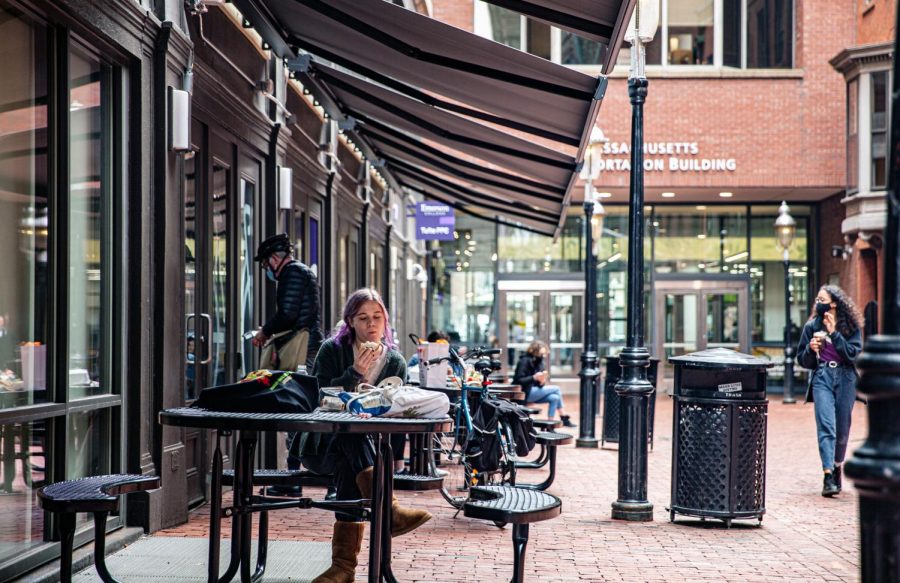 The new awnings installed in the 2B alley.

Emerson will lift most of the restrictions implemented on April 7 to slow down the unprecedented spread of COVID-19 amongst the community since late March on Thursday morning, college officials announced Wednesday.

With just over two weeks left in the spring semester, most policies will revert to the regulations set in place at the start of the semester on 7 a.m. Thursday morning, a Wednesday afternoon email from Assistant Vice President for Campus Life and “COVID Lead” Erik Muurisepp said. This includes lifting the stay-at-home order, restoring limited seating in the Dining Center, reopening the Max, Backstage Cafe, and Fitness Center, permitting academically required project work like film shoots, reinstating meeting room reservations, and allowing in-season outdoor athletic practices and competitions to take place.

“The last week of health and safety restrictions has shown us that when we follow the guidance and increase our vigilance to ensure our community’s health and wellbeing, we can manage the spread of the COVID -19 virus,” Muurisepp said in the email.

Last week, all in-person non-academic activities were put on hold in an effort to curb the virus’s spread. As a result, students were not allowed to leave their dorms or off-campus residences to go to class, get mandatory COVID-19 testing, pick up food, go to work, seek medical care, or go outside for socially distanced exercise. The Max Grill and Backstage Cafe were closed in order to limit the amount of exposure and divert employees to help with the grab-and-go services at the Dining Center, Muurisepp said. Student travel was also prohibited, as were group meetings in 172 Tremont.

Emerson reported one positive test among community members Wednesday from 1,145 tests administered Tuesday. Since March 31, 57 positives have been reported, an outbreak the extent of which had not previously hit the downtown Boston campus. The positivity rate rose to 0.24 percent from 0.19 percent on March 11. Currently, 22 students are in on-campus isolation and 20 students are in on-campus quarantine, after 81 students were relegated to quarantine or isolation housing late last week.

The decision to lift most of the restrictions was made in conjunction with the Boston Public Health Commission, Muurisepp said.

“I’ve been following protocol when it comes to wearing the mask and socially distancing with friends, even if I did see them in the past, like in [a] room,” said junior political communication Cameron Kugel. “So the protocols never really affected me.”

Certain heightened precautions will stay in place, including no small group work for in-person classes and barring visiting other rooms or suites within residence halls, a policy that will be re-evaluated on April 21.

Some students, like sophomore journalism major Morgan Gaffney, said she felt frustrated by the remaining restrictions so close to the end of the semester.

“My initial reaction was just disappointed, because we have two weeks left, and basically we don’t get to hang out with our friends within the building, but athletics practices get to continue even though it’s so many people gathering in one space,” Gaffney said. “It’s really discouraging and sad because, before this, I was looking forward to a memorable last couple of weeks—and that’s kind of just all been taken away.”

Freshman journalism major Ana Curi said she doesn’t believe easing restrictions is responsible in the wake of the outbreak, but understands that students want some return of normalcy, and that mental health can take a toll during periods of isolation.

“They’re doing the best they can without completely restricting us and taking away everything because we are paying for so much too,” Curi said. “It’s a weird balance between protecting the students and also like giving us what we paid for.”

On Tuesday, when five new positives were reported, Muurisepp said in a phone interview with The Beacon that the data was still worrisome.

“The numbers are still concerning to me,” he said. “They haven’t dropped as much as I would like to have seen.”

Muurisepp also pointed to “a very transmissible variant” as the potential driver of on-campus spread, but said the college is working with Tufts Medical Center on genetic sequencing to confirm this theory. He added that the recent outbreak resulted in “a few more symptomatic people than we have [had] in the past as well.”

“I really just hope that it taught people a lesson and that they’re going to be more responsible seeing that one little action that they make can affect so many other people and ruin it for so many other people, so I’m optimistic that people have learned their lesson after—in the matter of days—there were 80 people in quarantine,” Gaffney said. “But I think there definitely probably still is a possibility that this could happen again, because we weren’t expecting it. And we thought everyone was being safe.”

“Throughout this past week, while many of our community have done their part by adhering to the restrictions put in place, we have also received some reports of individuals and groups who violated the safety restrictions,” Muurisepp wrote. “Unfortunately, behaviors like this can quickly result in additional clustering and potential outbreaks of what appears to be a very transmissible variant of the COVID-19 virus. If this were to happen again, we would need to enter another period of restrictions.”