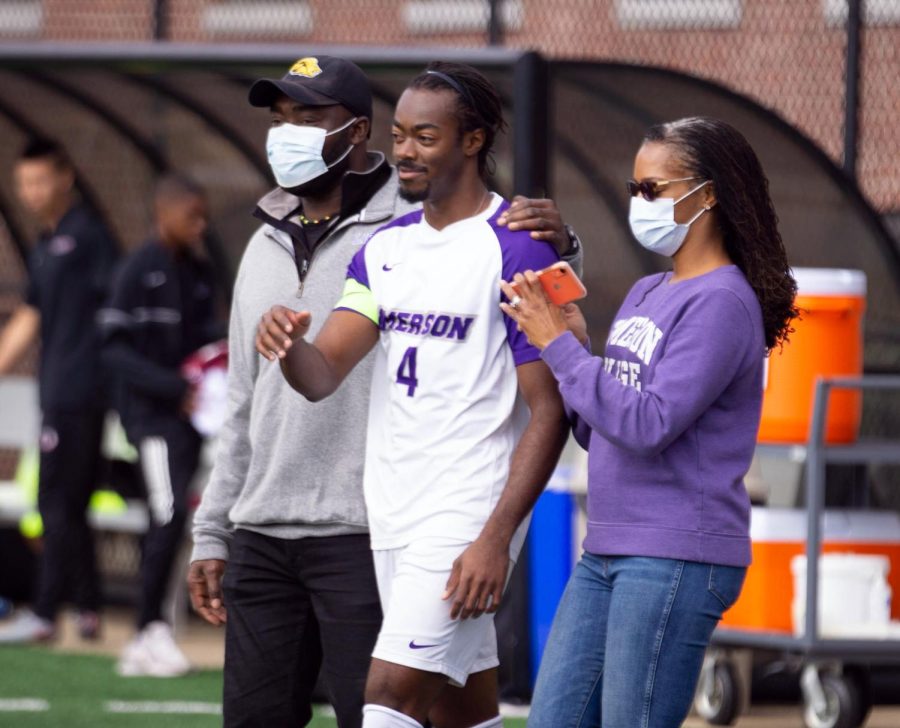 For the first time in 710 days, Emerson’s men’s soccer team trotted onto Rotch Field with family members and opposing fans in attendance for a match against the Massachusetts Institute of Technology, which they lost 4-2.

The match also represented the team’s Senior Day, where every senior on the team was honored. Each senior was given a plaque with a miniature form of their jersey and flowers.

Senior forward RJ Dziejma, said the team was looking forward to the match because of the prospect of families returning to their home field.

“Everyone was pumped to come into this game,” Dziejma said after the game. “We’ve had a rough couple of years as everyone knows and missing family, missing friends, and just to have everyone out, it was really special.”

The team scouted their opponent similarly to their approach to every match, but head coach Daniel Toulson said the message was much more sentimental.

“It means a lot for those guys that have been through a lot of things through the pandemic,” Toulson said in a post-game interview. “[The mindset was] no regrets, that it’s a short journey. The short four years that you get to do this for and it goes by really quick and making sure that they are excited about every single moment that they get to play.”

Dziejma’s mother, Lisa, said it has been tough without the ability to watch her son play but was proud to be able to be in the stands on Senior Day.

“It’s so special this year,” Lisa Dziejma said. “The team’s gone through so much in the last year and a half and they missed their whole junior year. So for us as a family, it’s bittersweet. It’s the end of another chapter.”

As special as the day was off the field, it was not quite as special on the field. The Lions were immediately met with pressure from MIT’s offense. Some were still finding their seat when the Engineers crossed the ball into the box, taken off the foot of midfielder Richter Brzeski, and sent into the goal less than three minutes into the game.

The Engineers did not wait long to extend their lead. MIT took a shot from a distance which found the back of the net for their second goal, this one just early in the third minute.

After a couple of saves from first-year goalkeeper Jacob Remer, the Lions would find themselves in another dangerous spot after giving MIT a free kick in the 15th minute. Taken again by Brzeski, who slotted the ball into the upper right corner of the goal for their third goal in just 15 minutes, making it an uphill battle for the Lions. Toulson said the early deficit could be attributed to poor possession in their own half.

It didn’t get any easier for the Lions as MIT would continue to take shots and create chances for their offense. Remer kept Emerson in the match–making eight saves in the first half.

Things started to look up for the Lions in the 27th minute after sophomore midfielder Ben Deeming sent a ball over the top causing the MIT goalkeeper to come out of the box and clear it with a header. The ball landed near the feet of Dziejma and he took his shot, scoring the first goal for Emerson on their first shot of the game.

The goal was memorable for the senior and with his family in attendance. It gave him the extra boost he needed to find the back of the net

“Anytime my family is able to come out to a game it’s always something that I really look forward to,” Dziejma said. “I really want to perform at the highest level when they’re here and even though the result wasn’t what we wanted it still felt good to have everyone surrounded by friends and family.”

The occasion of scoring in front of families at Rotch Field is a setting that hasn’t been able to happen without a fence in between for nearly two years. Lisa Dziejma said this was an uplifting moment.

“Not coming through the fence has been the toughest thing,” she said. “It warms my heart, you know, he always works hard on the pitch. Especially in October, it’s breast cancer awareness month which I had and I got over, and it’s my birthday [month].”

The Lions closed the gap to two goals but the half wasn’t over yet. Before the whistle to signal halftime was blown, MIT would get their three-goal lead back in the 40th minute. It was a mess of a goal where the defender saved a goal with a header that landed back in favor of the Engineers. After the ball was hit towards the right post, it trickled past the goal line.

The Lions went into the half down by three, but they weren’t out of the match just yet–coming into the second half with potentially their best level of play this season.

“The team that we were in the second half is who we’re trying to be,” Toulson said. “We were a lot more dangerous on the attack and I think our center-backs were a lot more confident stepping in to challenge goals.”

Despite a better showing in the second half from the Lions, it wasn’t enough to mount a comeback. Emerson’s second goal came in the 86th minute, when Junior forward Phil Han tapped in a pass from Dziejma. This would be the final point from either side ending in a final score of 4-2.

Dziejma––who had a goal and an assist––said that the second-half performance is something the team would like to carry into their upcoming matches.

“That’s the best half of conference soccer that we’ve played this season,” he said. “Hopefully we take that into our next game, which is non-conference, and then we bring it back on Saturday with a conference game.”

The next four games for the Lions are on the road before their final home game on Oct. 30. In their following matchup, they drew against Framingham State University on Tuesday, which broke a five-game losing streak. Despite their record of 2-8-2 on the season, Toulson said there are positives to the team’s development.

“We constantly talked to our guys about the process,” Toulson said. “There are lots of moments in games that we can be very positive about and try and build on those. In terms of building an identity as a program we’re actually doing pretty well.”