The Berkeley Beacon • May 24, 2020 • https://berkeleybeacon.com/emerson-missed-connections-virtually-connects-quarantined-students/ 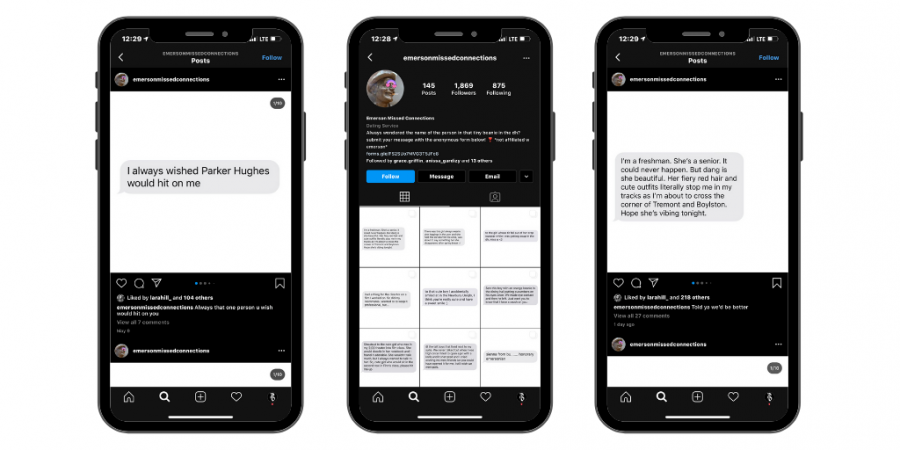 Emerson Missed Connections posted for the first time on April 29. In less than a month, the Instagram account has amassed almost 2,000 followers behind students’ anonymous posts about their crushes and brief encounters with peers.

The creators of the account explained the purpose of the page in their initial post, describing the account as a way for students to stay connected during the COVID-19 global pandemic. The account lets people directly message them or use a Google form link in their bio for students to anonymously submit stories. In a statement to The Beacon on Instagram, the account’s creators, who want to remain anonymous, said they are hoping to make quarantine a little more entertaining.

“We made [the account] solely to just make people laugh and have something to look forward to during this boring time, but we definitely didn’t think that it would blow up the way that it did,” they said.

The account’s creators said they were inspired to make the page by schools with similar accounts—students from Boston University, Boston College, and the University of Massachusetts Amherst have all made missed connections pages. Despite having much larger student bodies than Emerson, these three accounts combined have less than half as many followers as Emerson Missed Connections.

The account has posted 143 times so far, with the majority of posts containing 10 messages each. Despite the volume of posts, the creators of the account said they still have over 1,000 unread submissions.

The stories students submit cover a variety of topics, ranging from a description of a cute girl walking down Boylston Street to people attempting to find the authors of love notes from their freshman year.

Veronica Ordway ‘20 followed the account soon after its creation and was not surprised by its surge in popularity.

“I think that Emerson has a lot of very longing hearts and romantically inclined people, and I can see how the kind lustrous anonymity of Emerson Missed Connections would be really appealing to like a longing, artistic person,” Ordway said in a phone interview with The Beacon.

A few days after following the account, Ordway’s name appeared in two of the posts.

“I think she graduated in December, but Veronica Ordway… I would die for you,” the first post said.

“Veronica Ordway is very cool and I love her,” the second post said.

Ordway found out about the posts after receiving multiple texts from her friends and said the posts were a pleasant surprise.

“It’s very flattering,” Ordway said. “The ones that were about me were very nice and normal. I think the whole account in and of itself has kind of a voyeuristic appeal, and I could see how there are certain ones that might come across as a little aggressive or a little overbearing, but for me personally, I just thought it was funny and flattering.”

Junior Nicolas Chmielewski was on the receiving end of one of the accounts’ more aggressive posts.

“The only goal my best friend and I have is to hook up with [Chmielewski] before we graduate,” the post said.

This is one of the three consecutive messages that mentioned Chmielewski by name. The other two described him as the hottest person on campus and said they have their Instagram post notifications turned on so they can “be the first to see what he’s up to.”

“At first, I was blushing,” Chmielewski said in a phone interview with The Beacon. “I was like, ‘Oh my god, people really think this of me.’”

Despite the initial positive reaction, Chmielewski said the anonymity of the post did not appeal to him.

“I feel like it’s a weird page,” he said. “Of course this page is supposed to connect these people who have missed these connections, but I feel as if there was someone out there who really thought something of me, they would have reached out to me personally.”

When he read through the comments section of the post, Chmielewski said it ruined his week. These comments changed his perspective on not just the account but also social media as a whole.

In a second statement to The Beacon, the creators of the account said they make an effort to ensure all negative or offensive posts and comments are deleted and want students to be comfortable with messaging the account if they have a problem with anything they post.

“We don’t post things we feel are mean, hateful, or offensive because we respect our peers,” they said. “Unfortunately we can’t control what people comment. We can do our best to create a safe, casual, and positive environment, and we’re always open to take any posts/comments down that people feel might be hurtful or dangerous.”

Sophomore Chloe Nanian’s experience with the account was much more positive, as her friend group used it as an opportunity to compliment each other.

“We were in a group chat and were like, ‘Oh no one would ever write anything about us,’” Nanian said in a phone interview. “Immediately after that all of our friends were like, ‘no, you’re wrong.’ We were writing things about each other to make sure we get posted about at some point.”

Nanian and Ordway said they both agree that the missed connections account is mostly positive.

“I think everybody’s just excited at the prospect of revealing something or having their secret seen by the person that they’re thinking of, which I think is not bad in and of itself,” Ordway said. “As long as people continue to be respectful about it, which I think really everybody has been, I don’t think that it’s a bad thing at all.”