Emerson Poetry Project hosts show on the Common for all 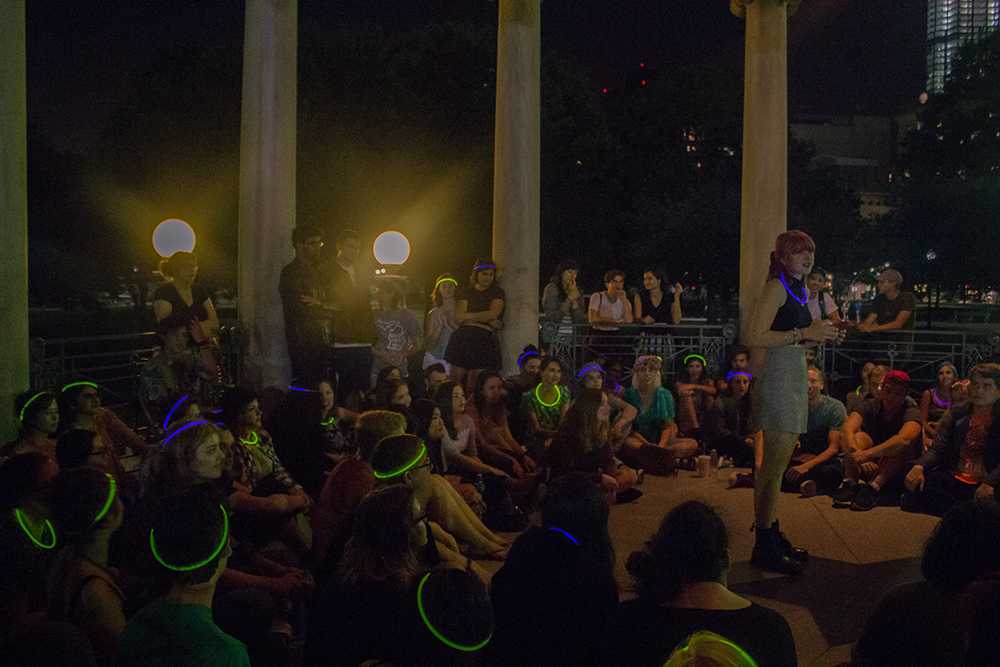 An intermittent breeze interrupts the balmy breath of the last days of summer, a perilous portent of the winter to come—and the clock tower rings. A dimly lit gazebo, white and round, a Globe Theater for a new generation of bards. Such was the scene of Emerson Poetry Project’s (EPP’s) first event of the year, Poetry on the Common, last Monday evening, Sept. 7.

Nearly 120 students sat and stood in the small gazebo, with most bearing purple and yellow glowstick rings atop their heads and around their necks. The poetry enthusiasts formed concentric circles around the six-pointed star in the gazebo’s floor—an impromptu stage. The event was held as a cypher instead of a traditional open mic: Rather than a host determining a set order, each poet individually chose the next person to speak. The only rule is that performers pick someone they don’t know.

“It’s a solid way to get a mix of veterans and people who are completely new,” Jo Wylie, a member of EPP’s executive board, said.

Wylie, a senior visual and media arts major, said that the style works well for new students who might find performing intimidating.

“In an open mic, you have to commit right at the beginning of the evening,” Wylie said, “but in a cypher, you don’t have to raise your hand until you want to.”

Over 30 people performed at the event, each prepared with a previously-written poem. Several said that it was their first time reading in front of an audience. Many poets told tales of lost loves and faraway friendships, while others addressed issues of sexuality, gender, and race. Some were comedic, many were dramatic, and all had a story to tell.

Kieran Collier, the president of EPP, said that he loves the organization because it gives people the opportunity to express themselves in a safe space.

“I believe poetry and art is like therapy,” Collier, a senior writing, literature, and publishing major said. “Giving people that opportunity to say the things they need to, for themselves and for others, is really great.”

Collier said he was interested in EPP before he even attended Emerson, keeping up with the organization’s Facebook page the summer before his freshman year and introducing himself at the Org Fair.

Like Collier, Alex Winzenread, a freshman writing, literature, and publishing major, said that EPP was a major factor in his decision to apply to Emerson. At the event, he delivered a powerful piece about his best friend’s struggle with alcohol and marijuana abuse.

“[My friends and I] knew that he was hurting himself and that there wasn’t anything we could really do about it,” Winzenread said. “I felt so powerless, but I gained power back by writing a poem.”

Wylie also performed at the event with a poem about her negative experiences in high school. She said that sharing her private thoughts with many people can actually be easier and more intimate than divulging a secret to a single person and that EPP was the strongest community that she had encountered on campus.

“There’s a bond that’s formed when you spend all your time together telling your deepest darkest secrets that occasionally rhyme,” Wylie said, laughing.