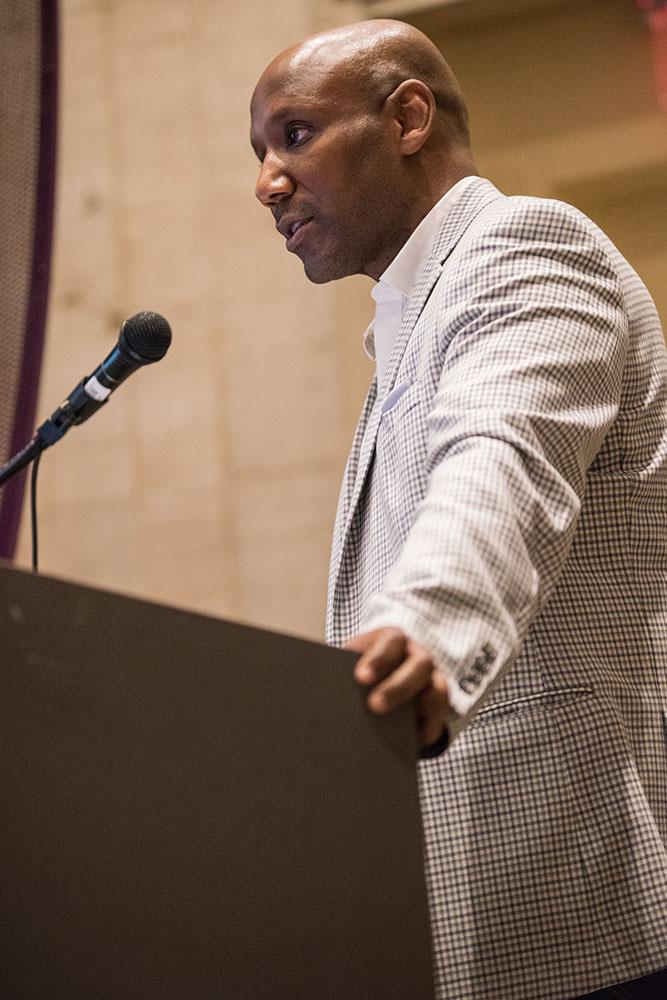 Across the country, states are spending over a million dollars a year on incarceration fees—and sometimes, that’s just for the inmates living within one single census block. This, Craig Steven Wilder explained, is the “million-dollar block” phenomenon that demonstrates the disproportionate number of inmates coming from impoverished African-American and Latino neighborhoods.

Wilder, professor of history at the Massachusetts Institute of Technology and senior fellow at the Bard Prison Initiative, was the keynote speaker and guest lecturer for the fall launch of the Emerson Prison Initiative (EPI) Tuesday at the Bill Bordy Theatre.

Housed at the Massachusetts Correctional Institute at Concord, a men’s medium security prison, EPI mirrors courses taught at Emerson for inmate-students, tailoring the class only to accommodate the lack of internet access.

The program made its public debut on campus with a lecture on residential and school segregation, tracing its roots back to the early 1900s and demonstrating how “redlining,” a discriminatory practice that refused loans to people from impoverished neighborhoods, directly contributed to the flawed education system in these areas.

“We know what works in education. And it’s because we know what works in education that we can commoditize it and sell it,” Wilder said. “So we shouldn’t pretend that after we turn something into a market, sell it, make it scarce and sell it to the wealthiest among us, we shouldn’t pretend to be shocked that there’s somebody who will never receive it.”

“I think it’s really disturbing to learn about these really deeply entrenched systems of oppression and inequality, and I think it’s great that Emerson is stepping up and committing to our mission of civic engagement and actually putting action into place to do something about it,” Pereira said.

Though no official plans have been made, the EPI plans to maintain a presence on campus by hosting lectures and events exploring themes related to the programs initiatives, Assistant Professor and Director of EPI Mneesha Gellman said.

“One of my core values is the democratization of education and finding ways to make education accessible to all. I wanted to find a way to connect that to Emerson’s commitment to academic excellence and to civic engagement,” Gellman said during her opening remarks.

Wilder ended the event on an emotional note, reminding the audience to extend the breadth of their empathy and applauding the college’s efforts in launching the EPI after a year and half planning.

“I think universities should be reckless in the pursuit of social justice,” Wilder said.

Editor-in-Chief Nathanael King did not edit this article.