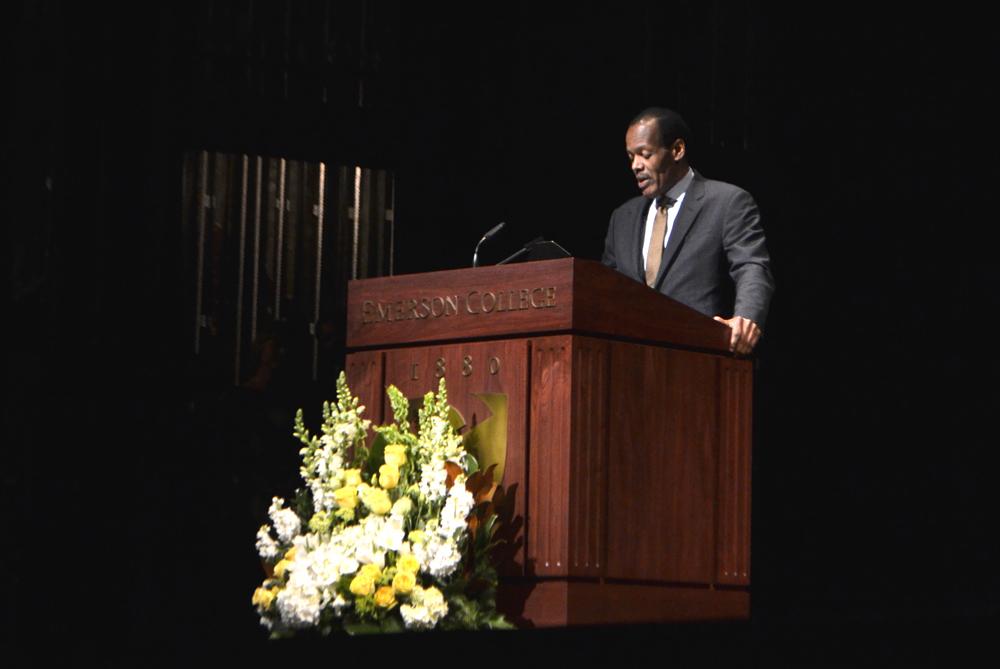 Faculty, staff, and students who knew Karl Baehr gathered with friends and family of the late marketing professor and senior executive-in-residence to remember his life and influence at a Jan. 17 memorial service at the Cutler Majestic Theater. Baehr developed the Emerson Experience in Entrepreneurship program, or E3, during his time as an Emerson professor. He died Nov. 13 of cardiac arrest at age 54.

“Karl had an intrinsic [ability] for challenging imaginative Emerson minds to bring innovation to business,” said senior marketing communication major Jon Allen to an audience of 69 people. “He brought out our inner dramatics to showcase our enthusiasm and passion for our ventures.”

Allen was the most recent winner of the annual E3 showcase, its eighth iteration, for his organic soft drink venture Temple Twist.

“Temple Twist will be sold in the spring, and I’m so pleased that Karl was able to taste my dream and make it real,” said Allen.

Doug Quintal, an Emerson professor and senior executive-in-residence, organized and emceed the memorial. Quintal warmly recalled memories of Baehr inside and outside of the classroom, and reminisced about family holidays and business trips he and Baehr shared as close personal friends.

“Karl was a colleague, a coauthor, and at times a partner in crime. But most importantly, he was my closest friend,” said Quintal in his introduction of the hour-long event.

President M. Lee Pelton was the first administrator to speak. While he admitted that many in the audience had known Baehr longer, he recounted Baehr’s influence on his own transition to Emerson, and how friendly they had become.

“What we remember most, perhaps, are his expressive smile and his expressive eyes, both of which were evidence of youth, playfulness, generosity, and even a bit of mischievousness, as if he took secret delight in knowing something that we did not,” said Pelton.

Donald Hurwitz, associate professor and interim chair of the marketing communication department; Phillip Glenn, dean of the school of communication; and Thomas Crane, a professional colleague of Baehr’s and the E3 law professor, each recollected specific memories of Baehr’s unique personality and expertise.

Hurwitz addressed the impact of Baehr’s personal catchphrase, “profit is good”—the same words that titled the slideshow of personal and professional photos that played during the program’s opening.

Glenn recalled Baehr’s influence on ongoing discussions of a new major at Emerson tentatively titled “Business of Arts and Communication.” According to Glenn, Baehr was interested in this new division, and spent much of his time advocating for it.

Crane, who served as a fellow managing director with Baehr at InterTerra, a Florida-based media firm, shared memories of their 25-year friendship.

The bulk of the program, however, focused on the two major themes that defined Baehr’s life: the E3 program and Baehr’s love of music, passions that often intersected, especially at Emerson.

Emerson graduate and E3 participant Juma Inniss, of the class of 2013, presented an original rap about political corruption and bribery, a topic about which he recalled having many conversations with Baehr.

James DiSabatino, Evy Chen, and Hiroki Murakami, all Emerson alumni and past students of Baehr’s, contributed short video tributes that were played for the audience. In videos running fewer than five minutes each, all three students recounted the effect of Baehr’s support outside the classroom.

“It’s still a shock to me that he’s not here,” said Chen quietly. “It’s been difficult knowing that he’s not there anymore because he’s always there, for anybody.”

Sam Fishman, a senior marketing communication major  and student of Baehr’s, described the event—which featured four musical tributes, including a solo cover of Peter, Paul, and Mary’s “Leaving on a Jet Plane” by Borden—as appropriately nontraditional.

“It was okay for [the speakers] to express themselves in the way that they knew Karl as an individual,” said Fishman at the event’s reception in the Bill Bordy Theater. “There were no constraints because that was really how he was with everybody, down to know you as you were.”

“You don’t often see a rap at a memorial service, and yet it was a very poignant part of the ceremony,” said Johnston.

Quintal closed the event by thanking the audience for their attendance and making an appeal for donations to the Karl Baehr Memorial Fund.

“It was somber, but it ultimately had the music and the liveness of [Baehr’s life],” said junior marketing communication major Melanie Katz, a student in the class Baehr taught on the day of his death. “Karl was very alive and he loved life, and this I felt was a post-mortem expression of everything that he was.”