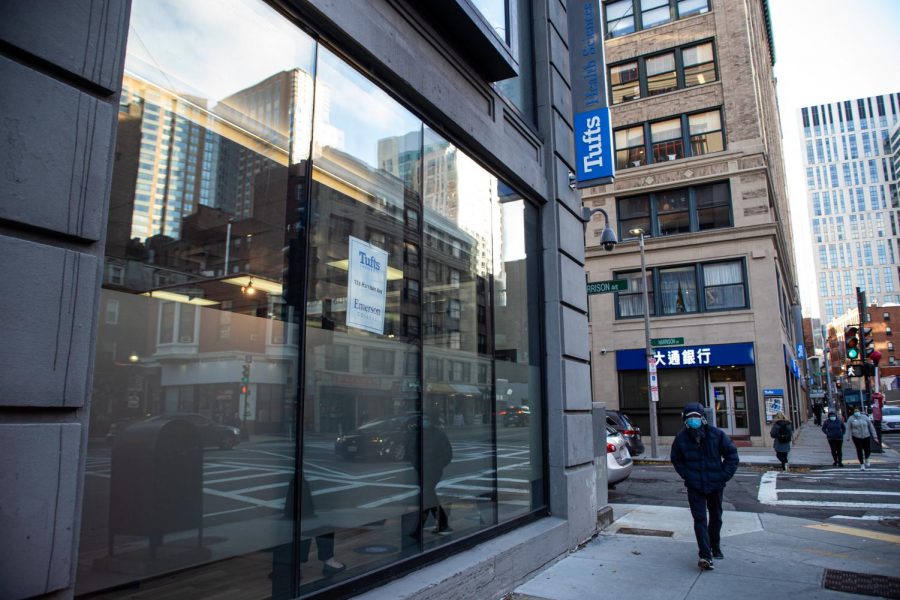 Outside of the Emerson College Testing Center.

Emerson reported 27 new positive COVID-19 tests for the second day in a row on Thursday, bringing the numbers of positive tests reported this week to a staggering 61.

The positives reflect an unprecedented surge at the end of the fall semester; on Tuesday, college officials announced 49 active cases among Emerson community members. The positives reported on Thursday came from 293 tests administered on Dec. 15, yielding a positivity rate of 8.87 percent—by far the highest weekday positivity rate to date.

The report also comes a day after the college eclipsed its record for positive tests in a single week of testing—previously held by the week of Jan. 25 to Jan. 31, which yielded 24 positives over the course of five days of testing.

Statewide cases have also skyrocketed to levels not seen since last winter—when almost no Massachusetts residents were vaccinated against COVID-19. Part of the rise has been attributed to the new Omicron variant of the virus, which was identified in Boston on Wednesday.

In a community-wide email yesterday, college officials said the contact tracing process was underway, and a number of cases had been tracked to a cluster resulting from social interactions.

“The contact tracing process is working and we are reaching out to all those identified as close contacts, and as of this message, we are aware of only one cluster of related cases, which resulted from social interactions,” wrote Associate Vice President for Campus Life Erik Muurisepp, who serves as the college’s “COVID Lead.” “We remain pleased that there has yet to be any confirmed classroom transmission to date.”