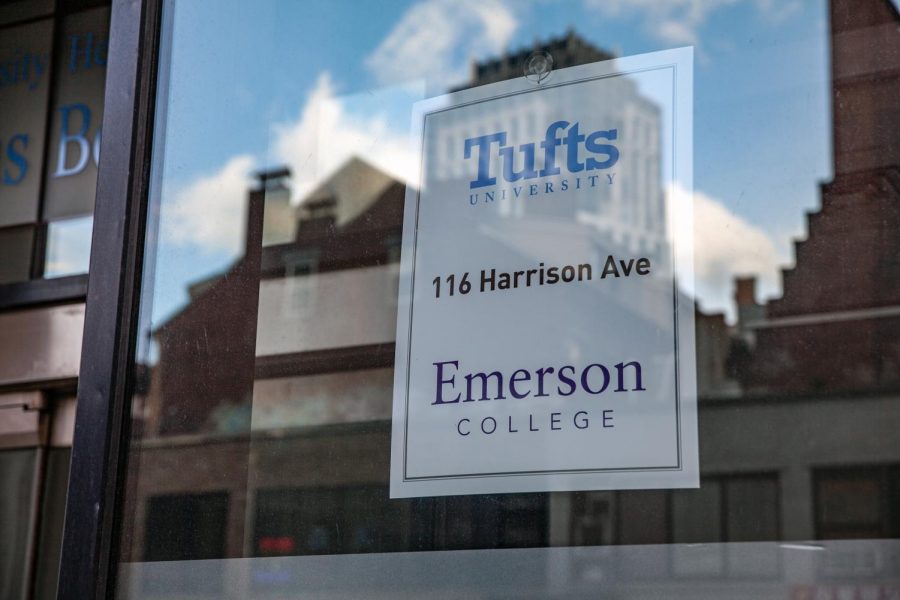 The exterior of the COVID testing site.

On Friday, Emerson reported four COVID-19 tests for Thursday of the 756 tests administered, setting the daily positivity rate at 0.53 percent.

As of Jan. 3, Emerson has reported 462 positive cases and administered 32,461 tests. The cumulative positivity rate sits at 1.42 percent.

The state’s downwards tick of COVID-19 cases continued on Friday as Massachusetts reported 1,983 positive cases for Thursday, with a daily positivity rate of 2.74 percent. The death toll rose to 47.

Massachusetts reported 13,711 new vaccinations—including boosters—from Thursday to Friday, bringing the state’s total to 13,839,452 doses. Friday’s daily vaccination update reported that 5,267,593 Mass. residents—according to Mass. Department of Health data, approximately 76 percent of the state’s population—are fully vaccinated, meaning that they have received both doses of the Moderna or Pfizer/BioNTech vaccine or one dose of the Johnson & Johnson vaccine.

Last week, Governor Charlie Baker announced the lift of the mandatory mask mandate in kindergarten through twelfth grade by Feb. 28. The high vaccination rate in Massachusetts was the main reason for lifting the mask mandate, cited Baker.

However, Boston Mayor Michelle Wu announced the day after that Boston Public Schools would not be lifting Governor Baker’s mask mandate, and is electing to wait to see “a consistent trend of downward progress,” as young children are not being vaccinated as fast as other age groups, she said in a news conference.

The Massachusetts Department of Health loosened the mask restriction Tuesday after advising certain severely immunocompromised individuals to continue to mask in public spaces following the dip in Massachusetts’ COVID-19 cases.

Friday, Emerson announced a shift in COVID-19 policy, including the allocation of non-Emerson guests in residence halls starting Feb. 22, and will drop the non-classroom indoor mask mandate starting March 21. The decision comes as Emerson sees a campus-wide decline in COVID-19 cases.

Additionally, Mayor Wu announced a threshold to ease the proof-of-vaccination rules last week. The mandate will be relaxed when the city’s occupancy in the intensive care unit falls below 95 percent, the city has fewer than 200 COVID-19 hospitalizations per day and the positivity rate falls below five percent.

The Boston Public Health Commission will consider easing the mask mandate for public kindergarten through twelfth-grade schools once the same baseline requirements as relaxing the vaccination mandate is met.

In a communication released to Emerson community members, the college reported to have obtained a “limited supply” of KN95 masks made by a CDC-approved manufacturer on Jan. 18 for student use. These masks can be picked up from the information office located at 172 Tremont, or the Campus Life Office, Walker 411.

Though in an email sent by Emerson College’s Chapter of the American Association of University Professors just three days after the college’s announcement reported the masks as “counterfeit,” the union was unable to confirm the efficacy of the KN95 masks.