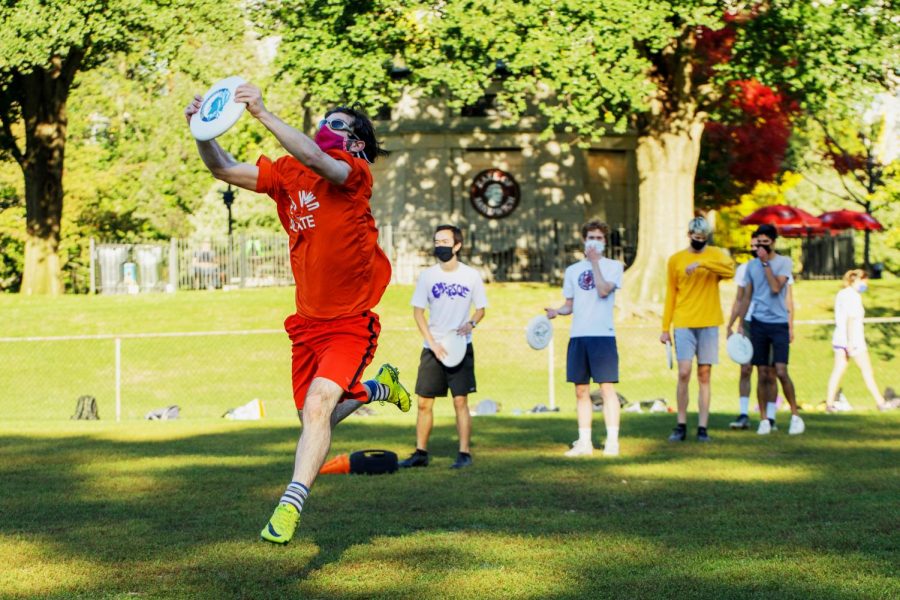 Robby Gessel catches a frisbee during ultimate frisbee practice for the Emerson Skunks.

Pandemic or not, there’s no stopping the Skunks.

The college’s co-ed ultimate Frisbee team practices two to three times a week in Boston Common during the altered semester, all while adhering to COVID-19 safety guidelines.

“Historically, we would be doing certain drills to prepare for tournaments, but this year it’s a little different,” said Skunks President and co-captain Jared Merrifield. “We’ve been really trying to focus on staying distanced, working on drills that keep us kind of far away. Compared to last year, we’re not scrimmaging or anything like that just because of distance. We’re really taking COVID seriously.”

The Skunks roster consists of 30 players, ten of which are new to the team. All players are required to wear masks at practices, even without being linked to any specific conference with overarching guidelines or recommendations that other teams at the college operate under. They also are reminded to do “six feet checks,” which they jokingly refer to as “rabies checks,” to remain distanced.

Incorporating new players to the team is challenging, especially while managing a safe environment during the pandemic. With COVID regulations in mind, the Skunks adapted the ways that allow them to still bond off the field as well. The team has a Facebook Messenger group chat and a Snapchat group chat which keeps them connected.

“After practice in my previous two seasons, we’d go to the dining hall, grab a table, sit together, and eat dinner,” Merrifield said. “But this season, it’s not quite as much of that because the space isn’t there [in the dining hall] and you can’t be in large groups of people. But people still have been trying to eat together, going out in the Common after practice and bringing lunch in smaller groups.”

On the field, however, the Skunks still build team chemistry as usual. First-year player Adam Tzach said he has enjoyed his first few weeks practicing and bonding with the team. He said that being on the team has helped him get out and exercise which also said that it has been really nice due to the isolation of the pandemic.

“At practice, we’re still talking, we’re still communicating, and making jokes as we go,” Tzach said. “We still have to communicate when a disk gets thrown and make call outs about our plays. But even during short water breaks, we will joke around and have a great time.”

Before the semester started, USA Ultimate, the sport’s national governing body, cancelled all the season’s tournaments. Without formal competition, it could be difficult for teams to find motivation because the ultimate end goal is stripped away from them.

Still, sophomore Tatum Jenkins has found that focusing on individual growth has motivated her.

“I’m a little less motivated in terms of winning, but in certain ways I’m more motivated to improve just myself as a player because now I feel like I have the time to do so,” Jenkins said. “We’re not working toward a specific goal. We’re working, especially with people who just joined, more on one-on-one things like…different tosses and cuts—just very small things in the sport that, if you can really perfect them, really improve my performance.”

One aspect of gameplay that now only exists in players’ memories is travel. Jenkins said she misses car rides to competitions with the team.

“We all pack into however many cars we need, so you’re getting to know people in this small car,” Jenkins said. “At least our drives are only like an hour, hour and a half long, and then you’re spending an entire weekend at another player’s house. So it’s a lot of time with teammates, which I personally loved.”

The Skunks do not use the same recruiting process as other sports teams on campus, mostly due to them being an organization and not an official team under Emerson Athletics. Most players learn about the team through word-of-mouth or the college’s org fair. In fact, the Skunks only became a college-recognized team last fall after operating independently for several years.

Merrifield said the pandemic could have played a major factor in the overall growth of the team due to the students opting out of in-person classes. At least ten new players on the team joined the roster this semester.

Tzach said he learned about the team in a unique way. The Skunk’s Instagram page, @emersoncollegeultimate, is how he discovered Emerson entirely.

“I actually followed them on Instagram way before I even knew about Emerson,” Tzach said. “I just was on Instagram one day and I saw the Emerson Skunks, and that just sounded really weird to me, so I had to check it out. It was an ultimate Frisbee team, and I always liked Frisbee.”

The Instagram page has been posting creatively written player introductions daily, highlighting player’s names, hometowns, majors, and extremely random fun facts. Sophomore Jacob Wasserman’s introduction reveals that his favorite weather is a sunshower, and his favorite palindrome is “Atlanta”. Sophomore Truman Segel is introduced as a VMA student from New Jersey, but the post also mentions his “favorite neglected tropical disease,” which is rabies.

In a time where students are told to isolate for their safety, the ability to get out on the field is an outlet for joy for Skunks players. While most athletes on campus are forced to completely abandon traditional practice formats and schedules, the Skunks are able to provide a close-to-normal experience for all students that wish to participate. Youran Cai, co-captain and vice president, has found that keeping active is the top priority for her.

“My motivation, personally, is just to stay in shape because practices are probably the only time I exercise during the week,” said Cai. “Last semester, I was pretty competitive. A lot of the people on the team were really competitive as well, and our main motivation is just not to slack off as much.”