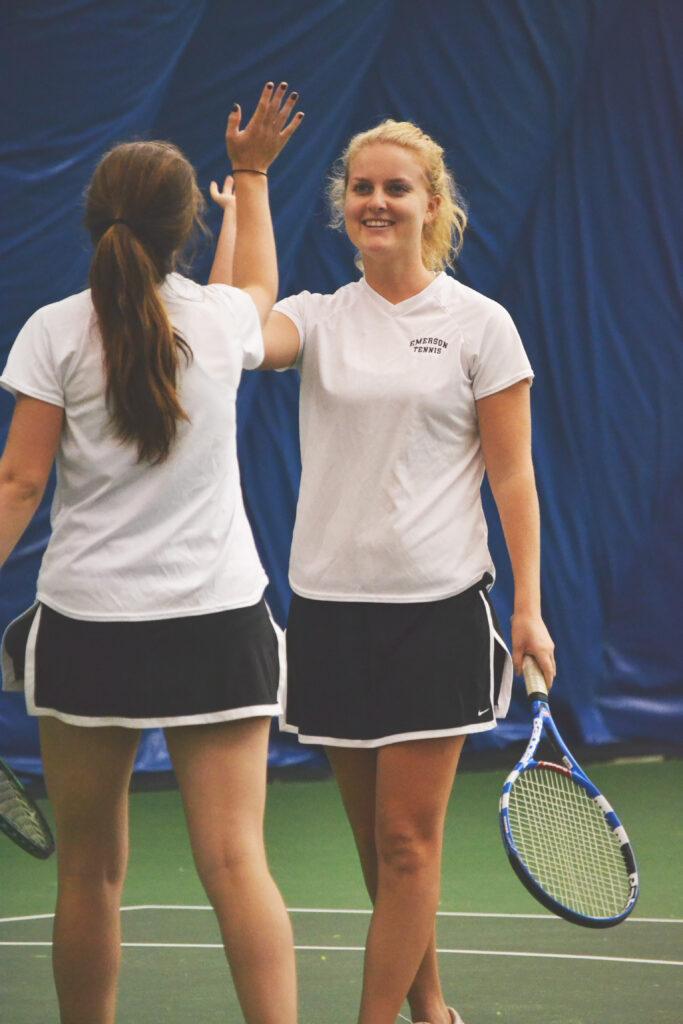 Sophomore forward Adam Halliday notched two goals for the Lions in their loss to the visiting Lyons (11-5, 4-1 NEWMAC) in a conference match at Rotch Field. Halliday’s second goal of the contest came in the 53rd minute and tied the game at 2-2. In the 70th minute, senior midfielder Ole Eriksen gave the Lions their first and only lead of the match with a header on a high pass from freshman Austin Alphonse to the top right corner of the net. Sophomore goalkeeper Carter Bowers finished the game with 10 saves. The Lions were outshot 32-14.

Player of the Match: Melanie Escobar

Freshman goalkeeper Melanie Escobar had seven saves for the Lions in their loss to the Pride (9-4-1, 5-1-1), who are tied with the Massachusetts Institute of Technology for the top record in the NEWMAC. Springfield provided the only offense, outshooting Emerson 19-0 in the match. The Pride also shut out the Lions in corner kicks 14-0.

Player of the Match: Allie Altman

Junior goalkeeper Allie Altman notched 10 saves for the Lions in their double-overtime loss to the Beavers (9-3-3, 4-2-1) at Hartwell-Rogers Field. Emerson’s first and only goal came in the 77th minute when sophomore Tayllar Righini knocked in a rebound off a header from senior Samantha O’Donovan. The Lions were outshot 28-8 in the match.

Runner of the Meet: Mike O’Connor

Freshman Mike O’Connor finished in 68th place with the fastest time (30:23) for Emerson at Franklin Park. Senior Brendan Stackhouse finished second-fastest for the Lions, coming in 94th place with a time of 31:34. The Lions finished 11th out of 16 teams. Ian MacLean of Babson College was first overall with a time of 26:56.

Runner of the Meet: Ali Dokus

Junior Ali Dokus finished first for the Lions and in 12th in the field with a time of  20:45 at Franklin Park.  Coming in second for Emerson (33rd overall) was junior Jenna Castro with a time of 21:57. The Lions’ next-best finish came from freshman Savannah Hubbard, who took 89th place with a time of 24:35. Emerson finished in eighth place out of 14 teams. Marina Capalbo of Babson College came in first overall with a time of 19:29.

Senior Alyssa Thorne had a match-best seven kills as the Lions made quick work of the visiting Blue Jays (8-15), winning by set scores of 25-10, 25-7, and 25-14 in their Dig Pink Game. Junior Kat Rice had six kills and only made one attacking error. Rice also had a block and five service aces, and served for seven straight points during the third set, which was Emerson’s best stretch of the match. Sophomore setter Juliana Tucker (22 assists, four digs) and freshmen Julianna Augustine, Annie Hall, and Jessica Hamilton each had three kills. Jamie Morgan had eight digs and had a strong match on the serve.

Player of the Match: Alyssa Thorne

Alyssa Thorne had 17 kills to lead the visiting Lions for a fourth consecutive match, as they fell in New London, Conn., to the Bears (19-6, 5-3) in a NEWMAC match by set scores of 25-27, 25-20, 25-17, and 25-23. Freshman middle blocker Julianna Augustine came in close behind Thorne with 15 kills, while Kat Rice contributed 12 kills and Alex Lynn 10. Sophomore setter Juliana Tucker paved the way with  53 assists and 13 digs as Emerson won a close first set. Senior defensive specialist Jamie Morgan had 23 digs.

Male athlete of the week:

Halliday, starting in his fifteenth straight game, racked up four goals on six shots on goal  in two matches, improving his season total to seven. Halliday assisted on the first goal, his fifth of the season, in the Lions 6-2 rout of the Falcons. With nine shots in the match, Halliday proplled himself atop the New England Women’s and Men’s Athletic Conference shot total list with 59.

Female athletes of the week:

Seniors Savannah Mosser and Lacey Russell capped their Emerson careers with a 6-3 doubles win over Suffolk University on Oct. 18. Mosser went 9-2 on the season playing at second singles, while Russell was 8-3 at first singles. Together, they went 8-3 as the Lions’ first doubles pairing. Mosser was the 2010 Great Northeast Conference Player of the Year as a freshman. She went 41-4 in singles play in her collegiate career, including a 20-match win streak. Russell was the 2011 GNAC Player of the Year, and finishes out at 36-8 in singles. The banner-athletes went 45-5 in doubles play.