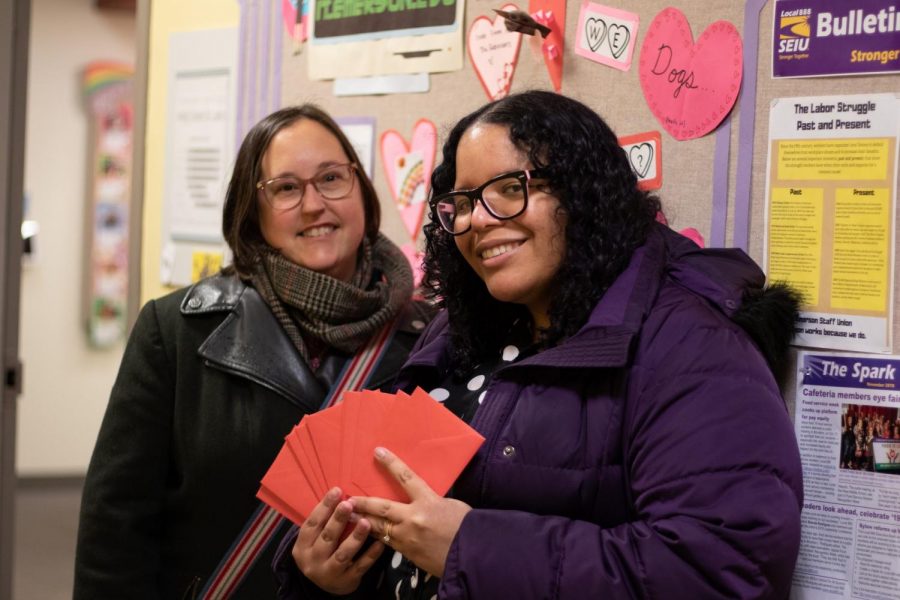 The Emerson Staff Union passed out nearly 60 handwritten invitations to a Valentine’s Day meet-and-greet event to staff members in non-unionized departments on Friday in an effort to recruit more members.

The event on Feb. 14 at Rock Bottom restaurant is being held before renegotiation talks begin in May of next year so the union can represent more departments in the contract discussions. Volunteers in the union passed out invitations to departments in 216 Tremont, 172 Tremont, Piano Row, and the Walker Building.

The union, represented by Service Employees International Union 888, was formalized in June of 2018 after a covert word-of-mouth start, according to Shaylin Hogan, program manager for graduate studies and co-chair of the union. The union includes over 100 staff members from the IT, Academic Affairs, and Institutional Advancement departments.

The 2018 contract established ‘vice president units,’ generally divided by departments, and the majority of employees in these individual units must support unionization in order to opt-in to the union.

“[Staff in non-unionized departments] may need something in that contract that we haven’t even thought of,” Christopher Wilson, administrative assistant to the chair of the department of journalism and a union member, said in an interview with The Beacon. “But we couldn’t negotiate on their behalf unless they were part of the union.”

The union began organizing in 2014 in response to various staff concerns, including unjustified firings, biased merit-based pay, and inconsistent disbursal of benefits, Hogan said. The contract established flat-rate raises with predetermined percentages, better parental leave, transit benefits, the establishment of a sick bank where employees can donate sick days to other staff that may have used up theirs, and the requirement of just cause and documentation of discipline to fire a staff member.

“It’s gotten a whole lot better, but we still have managers who think that they can just kind of just rule with an iron fist,” Dennis Levine, Emerson staff union chair, said.

Levine said the point of this meet-and-greet is to encourage communication among departments that may not otherwise interact, so the staff can present a unified front to the college.

“The school is very siloed,” Levine said. “People from certain departments don’t talk to other people and other departments so you don’t really know what’s going on.”

Hogan agreed the organizing effort establishes solidarity between all college staff, even if some staff don’t have issues in their own departments.

“A huge thing that came out of the organizing effort and the negotiations is just communication amongst staff members,” she said. “It’s really about community and taking care of each other as a group. And for better or for worse, the college definitely acknowledges us as a group in a way that they did not when we were individuals.”

Wilson and Levine distributed invitations out to staff members in the athletic department. They put invitations in the mailboxes, slid them under office doors, or handed them to other staff in the offices who they trusted to pass them along.

“Most of what I’m hearing from the other teams is that it was reasonably positive,” Wilson said. “Now we wait to see what happens next week—if people are going to come talk to us.”

Wilson said the number of people who will come to the Valentine’s Day meet and greet event is uncertain, but they only need a small number of people in order to spark interest within departments.

“We could get one person, we could get 10, we could get 20—we don’t know who’s gonna show up,” Wilson said. “We don’t need everybody to come—we only need a few people from different offices who can kind of get the ball rolling for us.”

Levine said he hopes the Valentine’s Day event will destigmatize the union and garner mutual support.

“We want to get the word out that first of all, the union is nothing to be feared,” Levine said. “That we’re here to help, that we’re here to make sure that everybody gets treated fairly. And that we’re somebody you can lean on when you have issues, because right now, as a non-union employee, you’ve got nobody to lean on.”