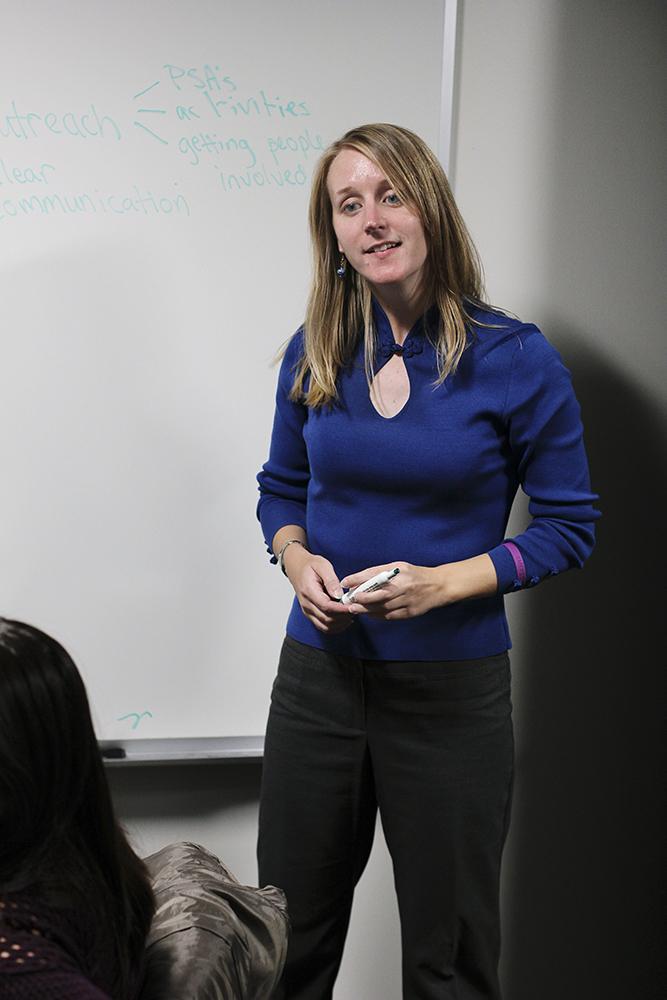 At open meetings for a new administration-led program to combat sexual assault and abuse, attendees discussed ways to get the wider college community involved in preventing acts of  violence.

The sessions on Oct. 9 and 10 were organized by Melanie Matson, who became the college’s first director of violence prevention and response in May and launched the program, Emerson STANDS—Stand Together, Act Now, Do Something—in September.

Matson said Emerson STANDS is meant to get students to talk about how the Emerson community can raise awareness about sexual violence and form campaigns to encourage preventative action.

“Students are incredible leaders,” Matson said in an interview. “They are the most knowledgeable about their community.”

Three students attended the first meeting on Oct. 9, and one student the next day.  Matson welcomed them in with cookies, pamphlets, and glow-in-the dark purple rubber bracelets.

Junior Amanda Canny said she was motivated to attend from personal experience handling an issue of violence.

“One of my best friends was in an abusive relationship last year,” she said in an interview. “I was very scared for his well-being for a while, and that experience stayed with me.”

In the meetings, students brainstormed ideas to end what they called a rape culture in the community and get more of their peers actively working to stop violence.  They discussed strategies like starting a pin-selling campaign and creating social media accounts to educate students on how to become voices of change in their community.  Matson said the group also hopes to foster community healing on issues related to rape culture.

“I have always been very adamantly against people using physical violence to get a point across,” Canny said. “Communication to me has always been the best and most direct form for solving issues.”

STANDS currently has no funding from Emerson, but the college’s Violence Prevention and Response center recently received a grant of $5,000 that Matson plans to use to support the efforts of STANDS.