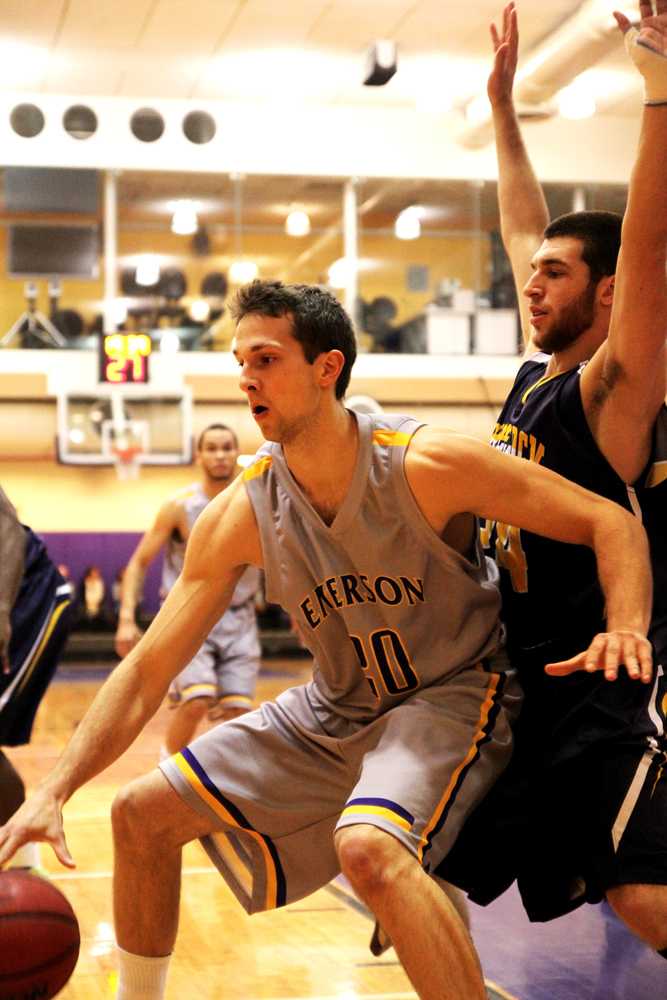 The day before the Emerson men’s basketball team began its season, players selected captains. Even though Jon Goldberg had only been at Emerson for six weeks at the time and had yet to practice as an official team member, his name was at the top of every list.

Goldberg was the only player out of 10 recruits this season with prior collegiate experience. The junior guard, who transferred to Emerson from St. Lawrence University (Canton, N.Y.) said that relocating from a rural campus to the busy streets of Boston made him realize that change can be a good thing.

“At St. Lawrence, I was comfortable because I liked my classes, I had great friends,” said the communication studies major. “But something inside of me was saying it wasn’t right. Sometimes, you just don’t want to change because you’re so comfortable in one area. Once you get over being uncomfortable, change can be a great thing, and different opportunities come knocking at your door.”

Opportunity came knocking in the form of a phone call from head coach Jim O’Brien, who first learned of Goldberg in a conversation with Goldberg’s high school coach.

“[Goldberg’s] high school coach called me and told me of Jon,” O’Brien said. “He said, ‘There’s a player’ — made me aware of who Jon was — ‘who’s leaving St. Lawrence, and I just thought that you should know that in the event you have any interest in him.’ … I ended up just calling Jon and introducing myself, and basically introducing Emerson.”

Goldberg said that the coaching staff, as well as Emerson’s reputation and majors, drew him to the college.

“I would really like to get into some form of communications,” said the Florida native, who formerly studied psychology. “I’d like to become a basketball coach or coach sports psychologist, so I think learning more about communication would definitely help me in those future aspects.”

As a senior at Rice Memorial High School in Vermont, six-foot-four Goldberg helped lead his team to a Vermont Division 1 state title. He was ranked first in the state that same year, according to the New England Recruiting Report. In six games this season, Goldberg ranks second on the team in points per game with 9.7. He leads the Lions, who are 3-3 on the season, in steals, assists, and rebounds.

O’Brien said that there are many facets to Goldberg that make him a good player, including his physicality, size, and court awareness. O’Brien, however, does have one critique.

“If there is one fault that I have with Jon,” O’Brien said, “it is that he is unselfish to a fault. You love having players that are unselfish, but he takes it to another level, where he is so unselfish that I have to get on him about being more assertive.”

Goldberg garnered respect from his teammates before the season started, which prompted them to elect him as a captain when practices officially got under way.

Freshman Brian Hurley said that Goldberg has the ability to rally together the rookies and provide an example for them to look up to.

“He brings more heart to the team,” Hurley said. “Everytime you’re on the court and you’re playing with him, you kind of want to step up your game. You don’t want to mess up, and you don’t want to do anything wrong to mess him up.”

Hurley described how Goldberg’s leadership in the Lions’ first game of the season against Fisher sparked Emerson to regroup and impose themselves into the game.

“We were warming up for the second half, and we weren’t really going that hard,” Hurley said. “[Goldberg] stopped our warm-up and made us all come together in the middle of the court.”

Hurley then said that Goldberg encouraged his teammates to work harder during the warm-up by telling them their efforts would increase the quality of play. The Lions, according to Hurley, heeded his advice and ended up winning the game.

Goldberg, who played in the Liberty League for two years with St. Lawrence, said that the competition he faces now with Emerson isn’t much different.

“There is usually more height [in the Liberty League] than I’m used to playing with, “Goldberg said. “Everyone has a dominant center, and some of the teams we’ve played so far haven’t had that height advantage. Otherwise, college basketball is just college basketball. It’s aggressive, it’s fast-paced, it’s a lot of fun.”

Goldberg, who said that his sister played basketball at Clarkson Unversity, said that his own passion for the sport spurred his father to sign him up to play early.

“I started when I was in pre-school,” Goldberg said. “I was always kind of tall for my age, so my dad signed me up for this basketball league that was supposed to be from kindergarten to second grade. Because I was so tall, he just lied and said I was in kindergarten, just because I wanted to play so badly.”

According to sophomore point guard Eli Kell-Abrams, this desire to play is still constant in Goldberg’s everyday presence on and off the court.