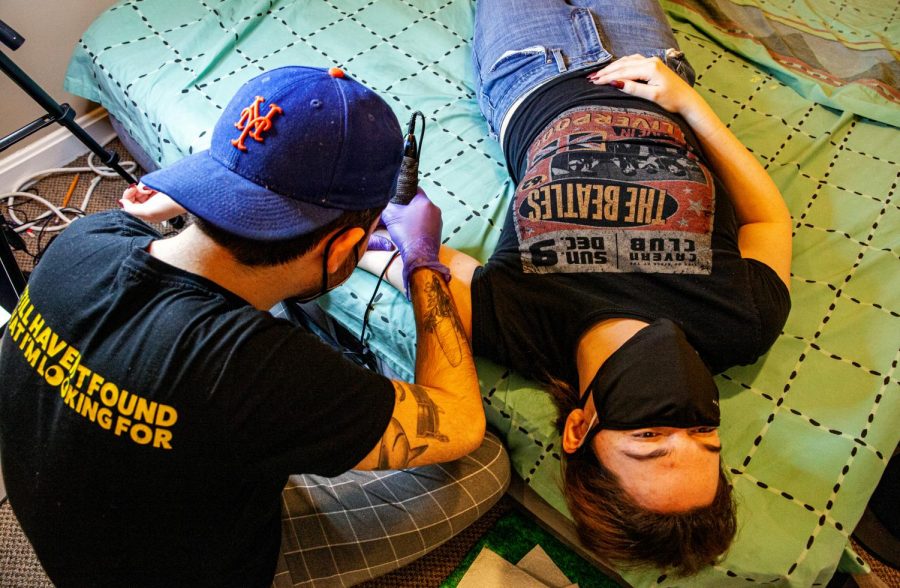 A client getting her tattoo on a mattress.

Emerson student Trey started his own tattoo business for students called Kosher Ink, inspired by the persistent boredom imposed by the pandemic. Since last May, Trey said he has done about 200 tattoos, 75 percent of which were for Emerson students. He does about five to 10 tattoos a week and spends about an hour on each person. His pricing varies based on the size, color, and design of the tattoo, with an average price of $50.

“I knew Emerson would eat it up—I knew it was the perfect demographic to do it, and COVID definitely helped,” Trey said. “People aren’t willing to go to tattoo studios, it takes a while now to book, so anyone wanting a small tattoo is not going to do that. There’s minimum fees, it’s usually, like, $75 is the minimum and I can do it for 40 bucks.”

During the beginning of COVID-19 lockdowns in May 2020, Trey started tattooing and initially wanted to do stick and pokes. Instead, he decided to go all-in and do more permanent tattoos, purchasing the necessary materials from Amazon and other tattoo supply stores.

Trey started promoting his work through creating a business account on Instagram, and following people he knows. Eventually, his friends showed their friends, and word spread about his tattoos. He now has almost 600 followers and said he is gaining more every day.

He said the brand name of his business, Kosher Ink, is meant to make an ironic joke of his Jewish background. By naming his business Kosher Ink, he said he is hinting at the fact that tattoos are not promoted within Judaism.

Trey said he gained experience over the months by trying out various designs on himself and family members.

Among the tattoo community, many tattoo artists will take whatever design they are handed and replicate it on the customer. Trey, however, said he will take a design he was sent and redraw it to avoid copyright infringement.

“I refuse to just steal someone’s art because I know that’s not really ethical, so I end up designing something that’s similar, I’d rather that,” Trey said.

As a college-student-tattoo-artist, Trey said it’s frowned upon by professionals for him to give tattoos because of his lack of apprenticeship.

“I don’t think I’m doing anything unethical because I’m staying safe and I’m doing good work, and people keep on coming back because they’re happy with the product,” Trey said.

Aside from the positives, tattooing has some drawbacks for Trey. He said at the end of the day, it is a job that requires a great deal of hospitality and patience.

“I got past the honeymoon phase really quickly. A lot of the time I’m dealing with people, and I have to respond to their every request. It’s a lot of pressure,” Trey said. “Sometimes I’m doing it from twelve to six, and I have to talk to these people, and I’m not a super extroverted person.”

When tattooing someone, he said the client’s comfort is a top priority so they don’t get nervous and decide to not go through with it. Giving customers undivided attention is very important to Trey, but can also be exhausting at times. He also wears a face mask when giving tattoos, and requires clients and any friends they bring along to wear a face mask for the duration of the procedure.

“It’s a hospitality service in some sense—I have to make people feel comfortable and be talkative and smile,” Trey said. “It can be draining if I’m in a bad mood. People don’t want to be tattooed by someone who doesn’t seem nice. Why I think a lot of people keep on coming back is because I have to make sure that I make people feel comfortable and trust me.”

Emerson freshman Natalie Barden went to Trey on Feb. 8, 2021 for a tattoo of a snake on her hip. Barden’s friend designed it for her, and Trey helped her size it.

“I was definitely more relaxed than my other tattoo experiences,” Barden said. “Because he’s a peer, it’s not as intimidating, and he was adamant that my friend can come and she can sit next to me and we can talk the whole time. When I got my first tattoo, the artist wouldn’t even let my parents hold my hand, so it was very different [with Trey] than what I’ve experienced in the past.”

Trey said his clients are often more comfortable with having an Emerson student tattoo them because good reviews from fellow Emersonians put potential clients at ease. Along with that, Kosher Ink has significantly lower prices than most professional tattoo studios.

When Barden was asked if she’d go back to Trey, she didn’t hesitate in saying yes. Barden said Trey doesn’t have a minimum price, which makes all the difference.

“Definitely, especially for simpler tattoos because the price is so good,” Barden said. “I have a heart on my wrist that took three minutes and it was $80, and the snake was $60. For simpler things, it makes so much more sense to go to Trey.”

Trey said his goal is to get customers who are living in the Little Building, which he has successfully done. With being away from parents and cooped-up in the dorms, freshmen are excited to get tattoos, so Trey said they often approach him with requests. He says the majority of his clients are from the freshman class who show their friends the new tattoos, bringing him more customers.

“The freshmen are just pouring in,” Trey said. “Either they’re finally away from their parents, they’re bored, they’re stuck in LB and they want to do something a little bit adventurous. They can’t go out to parties or anything, and going to get a tattoo from this kid sounds really college and fun.”

To book a tattoo appointment with Kosher Ink, Trey asked potential clients to direct message his Instagram account and send him design ideas.

Trey declined to share his last name or Instagram handle in the story to protect out of fear of retribution.