Emerson students, both past and present, litter the 2022 Sundance Film Festival 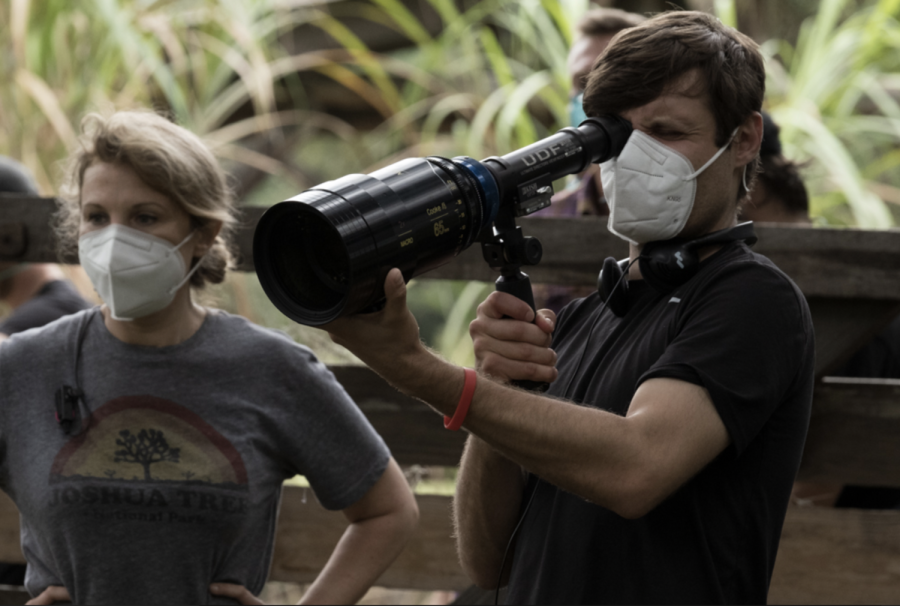 Alex Disenhof on the set of "Alice."

The chances of spotting an Emerson alum in the entertainment industry are high, and the 2022 Sundance Film Festival—taking place Jan. 20 to 30—is no different.

Among the many alumni with featured credits are Alex Disenhof ‘09, Jordan Parrott ‘08, Julian Higgins ‘08, and current sophomore Noah Matalon. Through their applied knowledge of filmmaking given to them by Emerson and their passion for collaboration, all four have become skilled in their line of work, which they’re ready to showcase.

Disenhof is the cinematographer for “Alice,” which stars Keke Palmer as an escaped slave who stumbles into the year 1973 and confronts the lies that kept her enslaved. The film premieres Jan. 23 in the U.S. Dramatic Competition, making it Disenhof’s second film to be shown at Sundance—he previously worked on “Fishing Without Nets,” which won the 2014 Directing Award: U.S. Dramatic category.

“Ultimately, I take films and I do films because I love them and I connect with the story or the filmmaker, and ‘Alice’ was no different,” Disenhof said. “Once you’ve had a film at Sundance, you’re kind of in the Sundance family, and they’re such great people.”

Parrott also held the position of cinematographer and director of photography on the set of “Chaperone,” a 15 minute short film about a chaperone and his client completing a strange deal at a remote location. As a Sundance first-timer, Parrott still felt the script was brilliant for the festival route, calling it a “rare gem.”

“It was only after I was hired into the project that Zachary Quinto was attached and I knew it was going to be a fierce, powerful story put onto the screen,” Parrott said. “After shooting and it came out, I remember being very proud of the work we did and knew we had a strong chance in getting into Sundance.”

Higgins wrote, directed, and produced his first feature “God’s Country,” starring “Westworld”’s Thandiwe Newton as a grieving college professor who catches two hunters invading her property. Currently working as a film professor at Emerson and the American Film Institute, Higgins started the five-year process with co-writer Shaye Obgonna in 2017. Though, time has gone fast due to how devoted they are to the project.

“I feel like [the film] represents the kind of work I want to put into the world,” Higgins said. “As long as it took and as complicated as it was, it has meant so much to me and it was truly a joy to work on throughout.”

After coincidentally stumbling upon the set in his hometown, Matalon was offered a production assistant role for “Call Jane,” a story about a woman with an unwanted pregnancy searching for means of a legal abortion. Conversations with some of the crew allowed Matalon to connect with Emerson alum, while simultaneously getting the opportunity of a lifetime.

“I didn’t really expect to be a production assistant on a film this summer,” Matalon said. “A lot of hands on work. It’s been a really cool few months getting to see the process of everything.”

Matalon compared the Emerson student-run set to the nature of a big-league set, describing levels of control and the hardworking team effort.

“It really taught me that everybody matters, which I didn’t truly believe until I got on the set, but it’s very true,” Matalon said. “At Emerson, being able to make decisions and have that creative freedom is even more empowering now that I have had the experience of being on a big set where you’re just a smaller piece to the puzzle. Being at Emerson and being able to make our own movies here, the simplicity of our sets and crew is a real gift.”

Like student productions, professional sets have had to adapt to the changing way of work due to COVID-19. Being one of the first sets to resume, located in Georgia, Disenhof described the experience as a bit scary, but said the finished product ultimately paid off.

“We felt a bit like guinea pigs trying to figure out how to deal with all the elements before the testing procedures had been completely figured out,” Disenhof said. “Usually when you’re making a film, you go right through and just get it all in one go. It took a long time to make the film. Nonetheless, it was a great crew, great cast, and a really great first-time director.”

Higgins’ set also halted for precautionary measures, but the crew stuck with it until the finished product was ready to be shown to the public.

“We did have to shut down during the pandemic and we had a whole period where we needed to wait and figure out how to resume safely, so it was definitely quite a roller coaster, but we’re done and we’re extremely proud of it,” Higgins said. “We’re all just over the moon that they decided to include us in the festival.”

Disenhof’s favorite part of filmmaking is the collaboration of everyone on set, with people that came from all over and all different types of backgrounds. With everyone working towards the same goal creatively and physically, the process is rewarding in itself, no matter how good or bad the film may be.

“Someone said to me once that it’s community artmaking, and that’s how I like to think of it because you get a set full of people who are all committed to making something,” Disenhof said. “Every shot is essentially a miracle that happens because so much has to go on behind-the-scenes, so there’s a great sense of comradery, friendship, and family really, once you get going. There’s nothing like pushing yourself to the limit with a bunch of like minded people.”

Besides his love for the film medium and creating something from scratch, Parrott also emphasizes his passion for working as a collective to find creative solutions. Every aspect of the process requires some kind of dedication and effort to be analytical.

Matalon, who is still learning at Emerson side by side with his peers, finds the forged relationships from sets to be significant as well.

“I really love the comradery on set, which is for both Emerson and elsewhere, especially so on these bigger movies,” Matalon said. “Even though you’re miserable at some points, having everyone there to lift each other up and knowing it’s a big team effort really makes it enjoyable in the end.”

Similarly, Higgins feels most satisfied when the cast and crew is unified to produce a complete film, even with an unknown outcome. To him, it’s a “process of discovery” with the group, who brought their distinctive experiences and energies to the table.

“No matter what idea you had as you were writing it, it’s always a surprise, and for me, a pleasure to learn about the movie,” Higgins said. “I’ve been very fortunate on this project to work with a group of people that really cared, committed, and really wanted to tell the story.”

In terms of what he can gain from Sundance, Higgins hopes the public audience thoroughly enjoys the film just as much as he enjoyed. They anticipate finding a distributor for the film when the festival draws to a close, and Higgins looks forward to continuing to work on his craft after his first feature success.

“My plan always is to continue generating my own projects because that is the one thing I can rely on if I want to keep doing this,” Higgins said. “I’ll just continue to generate work that I can make and be passionate about. A first feature is really a significant moment. Once you actually do get to cross that bridge, it can be a real game-changer.”

Just as each individual film set fosters its own creative community, Sundance is no different, bringing artists and their work to audiences to inspire and support innovative ideas. Parrott finds the festival thrilling, with the name affiliation attached to a top story contender.

“It’s very clear that Sundance is the cream of the crop domestically,” Parrott said. “Sundance does a talented job at putting a spotlight on stories that need attentive care in the industry.”

Higgins describes the festival as “the ultimate destination for American independent film.” An exhibition of screenings, panels, networking, and more allows independent filmmakers to get their foot in the door and open up possibilities.

Tickets are available for purchase for the public. Sundance will be entirely online this year due to the ongoing pandemic.

“Unfortunately, I can’t really see the familiar faces this year because it’s online, but just to have that connection again and have that great support group of people,” Disenhof said.

Each artist interviewed for this article offered advice for aspiring creatives and filmmakers:

“I would really encourage people to start thinking now about what they really care about in the world and talk about those things in their work, whatever it might be,” said Higgins.

“The peer to peer learning that happened on the Emerson campus was extremely valuable,” said Parrott. “You make mistakes with your peers, but you also learn actively with them. That carries on to the world and the industry.”

“If you love what you do, and it’s hard work especially when you first graduate to figure out ‘how am I going to make a life out of this,’ keep plugging away,” said Disenhof. “You’ll have ups and downs, but it’s the best feeling in the world when things start to click.”

And from a current student’s perspective, Matalon says he’s “much more eager to take advantage of the time I have here now.”