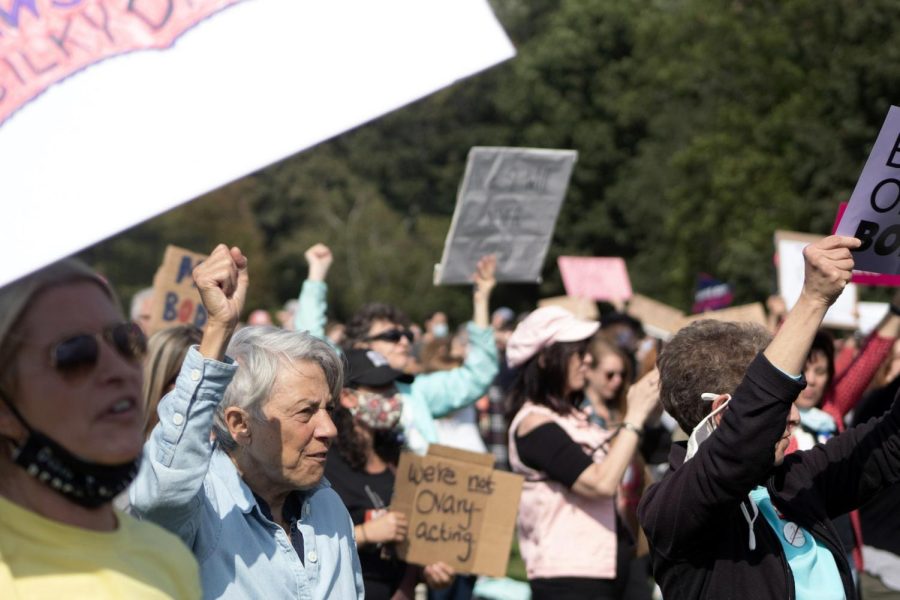 The event, organized by the American Civil Liberties Union, NARAL Pro-Choice Massachusetts, and the Planned Parenthood Advocacy Fund of Massachusetts, was one of hundreds happening simultaneously nationwide that were affiliated with the Women’s March. It drew individuals from across the Boston area, including several Emerson students who came in support of reproductive rights under threat in Texas and across the nation.

Hannah Flayhan, a sophomore journalism major, said she attended the march because reproductive rights were critically important to her as a young woman.

Elisa Davidson, a sophomore creative writing major, said she came out to the rally for a similar reason.

The event was headlined by several notable speakers, including political figures such as Massachusetts Sen. Ed Markey, Rep. Ayanna Pressley, and Attorney General Maura Healey. Occasionally, a chant would break out with a leader yelling, “We won’t go back!” and the crowd would respond, “We will fight back!” over and over until it would morph into an eruption of applause.

In his speech, Markey outlined his agenda for securing abortion rights on the federal level through broad-ranging structural reform in Washington D.C.

“We must pass my legislation to expand the Supreme Court by four seats so that we can restore balance and justice of the Supreme Court,” Markey said, referring to the 6-3 conservative balance on the court that has existed since the administration of former President Donald Trump. “We need to abolish the filibuster so we can pass the progressive laws we need in this country.”

Shortly after leaving the stage to an eruption of applause, Markey reiterated the importance of abortion rights in a brief interview.

“We’re going to build overwhelming public support for constitutional rights. That has to be protected for all women, all people in the United States,” Markey told The Beacon. “What today represents is the beginning of a movement that is going to inject itself into the politics of America in 2021, 2022, and beyond.”

Pressley, whose constituency includes Emerson and who has also introduced legislative action to prevent state and federal erosion of abortion rights, said in her address that government institutions are responsible for the backsliding in reproductive rights.

“The extremism of this Supreme Court has no shame and no bounds,” she said to the crowd. “They have stood in the way of voting rights, of housing rights, of reproductive freedom.”

On Wednesday, U.S. District Judge Robert Pitman ordered Texas to suspend Senate Bill 8, saying, “the moment S.B. 8 went into effect, women have been unlawfully prevented from exercising control over their lives in ways that are protected by the Constitution.”

Several speakers also linked the issue of abortion to a need for equitable affordable health services. In the U.S., 50 percent of women who had an abortion in 2014 lived below the poverty line, according to the American Journal of Public Health.

Once the speakers finished, protest organizers from the Party for Socialism and Liberation Boston led a march around the park. Protesters waved signs that displayed sayings such as, “Don’t tread on she,” “Against abortion? Don’t have one,” and “Keep your rosaries off my ovaries.”

Though many of the protesters were adults and college students, others were teenagers from across the Boston area. High school junior Ji Yann Chin said abortion rights became a pressing issue for her after months of following the news in Texas.

“We’re just teenage girls, and this affects our future very much,” Chin said.

Many protesters, including biology teacher Lauren Pelland, expressed the importance of solidarity with those in Texas and other states who are denied abortion access.

“[We’re] very lucky to live in Massachusetts,” she said. “We need to support those that aren’t so lucky.”