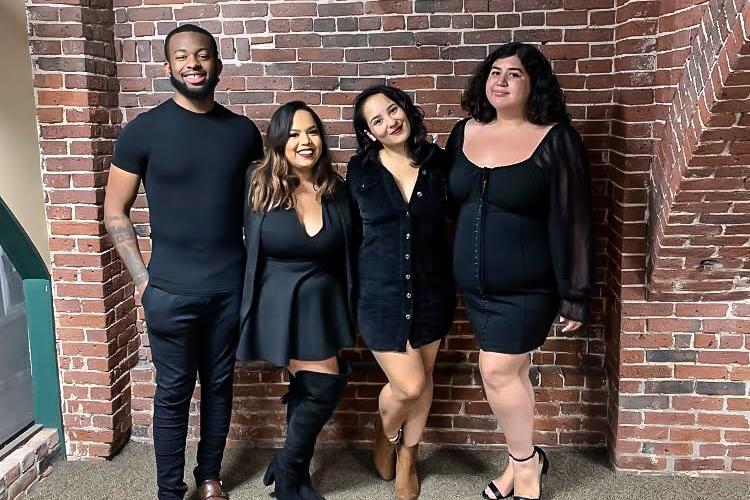 The four students took home first place and a $1,200 cash prize from the 2019 VOX Pop Slam Poetry Tournament in October at Stark Brewing Company in New Hampshire. The students are four of five Emerson students who competed in the 2019 College Union Poetry Slam Invitational.

Teams compete in bouts, which are four rounds of poems, each three minutes long, without props, costumes, or musical accompaniment. The VOX competition comprised only two bouts(,) and each bout had three teams rated on a scale of one to 10 by the judges. The winning teams of the two bouts advanced to a head-to-head competition where the winner is determined by audience reaction instead of numbered judging.

“It’s very common that the audience members who are judging are people who just showed up to the bar to hear some poetry and they are asked to judge,” LaRosa said in a phone call. “They might not have an opinion about poetry or maybe they do—it’s just unbiased people.”

Slam poetry was originally invented in the 1980s by poet Marc Kelly Smith in Chicago with the intention of making poetry more accessible. Unlike written poetry, it brings in an element of performance in the deliverance of the piece.

“Essentially, you are just putting numbers to art, which is pretty counterintuitive in itself, but because slam is a lot of emotional work, it’s not only a way to showcase your writing or how good of a writer you are, but also how good of a performer you are, how good you can convey messages and what things mean to you,” LaRosa said. “And that’s why slam is so personal.”

Sitting in LaRosa’s apartment before the VOX Pop tournament, the team revisited and practiced the poems they had performed for the College Union Poetry Slam Invitational.

“It felt amazing [to win] because when we went to CUPSI we had done really well in our first couple of rounds and then we were in a really tough bout and we got knocked out unfortunately,” LaRosa said. “We just had this feeling of our team collectively wanting to show more of our work and wanting to prove that we’re a really solid team, that we’re a force to be reckoned with.”

Members of the team expressed themselves creatively through their poetry at the VOX Pop tournament and shared personal stories that led them to victory, LaRosa said.

“I think it’s important because the voices that are being celebrated in slam are not necessarily celebrated in other venues, especially in literary venues,” Cardona said in a phone call . “It’s standard almost to encourage people of color and minorities and queer people to talk about their experiences and make themselves heard, which I dont think is super common in a lot of other mediums.”

Cardona performed a poem titled “El Paso,” the last poem before the team’s victory, which she wrote about her hometown and embracing her culture.

“It’s a little bit frightening because it feels intimate and you’re in a room full of strangers, but at the same time you see people identifying with the things you are saying and reacting to what you are saying,” Cardona said.  “It makes the room feel a lot safer, and it allowed me to realize that your experiences aren’t necessarily solitary.”

VOX Pop was LaRosa’s second-to-last slam performance before graduating. She said winning the competition validated all  the hard work the team had put into crafting these performances.

“Slam is fun and art is fun, but we are a competitive team and we put a lot of work into our pieces, and when you show your art it means a lot to you personally and you want the audience to receive it well, so winning was just amazing,” LaRosa said.