Emerson teams up with scholar-athlete program 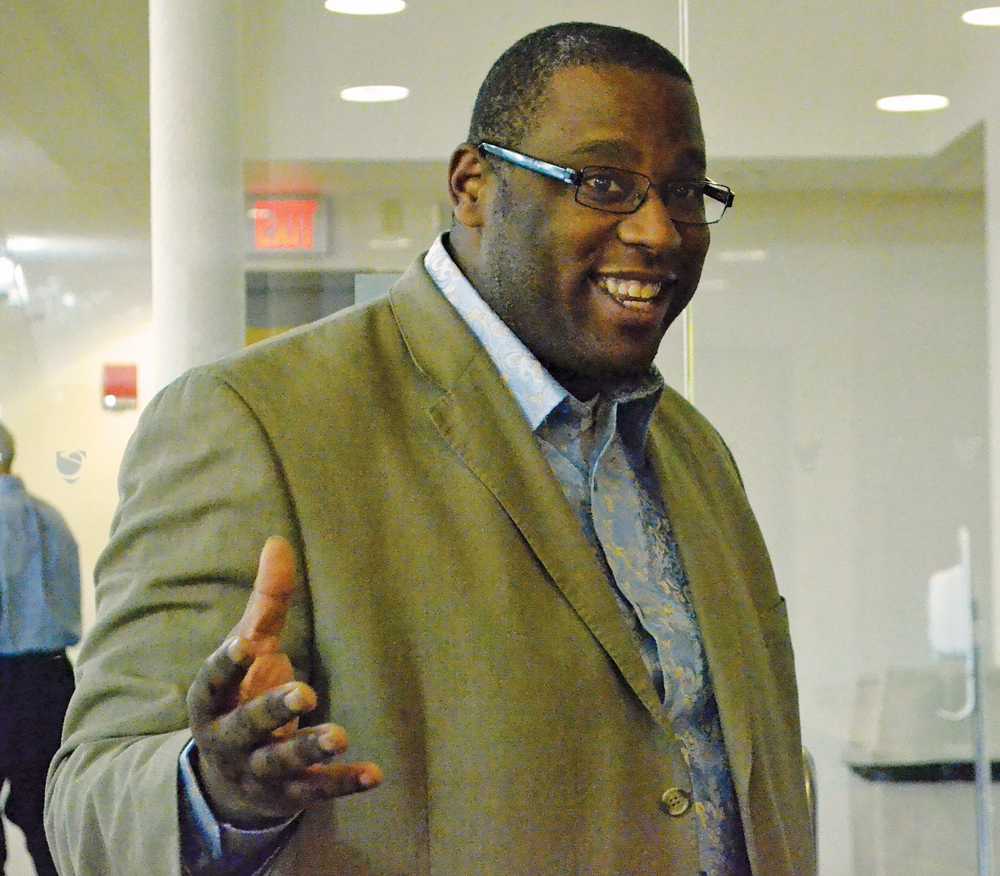 Boston City Councillor Tito Jackson asked everyone in the room to raise their right hands and repeat after him.

As the crowd of high school students he was addressing echoed his words, Jackson looked around the room and nodded in approval.

The speech was given Friday in the skybox above Emerson’s Bobbi Brown and Steven Plofker Gym as part of an event for high school students from Boston Community Leadership Academy and Snowden High School and enrolled in the Boston Scholar Athlete program.

As his speech progressed, the councillor moved through a mantra that emphasized the importance of an individual’s decisions in life, which ended with the students using their right hands to pat themselves on the back, praising hard work yet to be done.

According to its website, the program “strives to increase opportunities for public school students to succeed on the court, in school and in life. [It also encourages] athletic participation while providing the support students need to thrive academically.”

The event, which started at 12 p.m., included a campus tour for the students, a pizza party with Emerson coaches and athletes, and a visit to the Emerson women’s softball game on Boston Common later that day.

Amy Sherman, a junior communication studies major, said she organized the program for a project in Social Advocacy and Grassroots Organization, a 400-level communications class.

“I just really wanted to do something for them,” Sherman said, “to give the kids an opportunity to see a college campus they wouldn’t necessarily always know about.”

Sherman said she heard about the program through a friend who interned at the program and Jim O’Brien, the head coach of the Emerson men’s basketball team, who has helped the organization out in past years.

“I did some research, really loved what they did, and wanted to work with them,” she said.

After Jackson’s speech and a tour of the Tufte building, students from BCLA joined the group for the rest of the self-proclaimed “VIP tour.” The newcomers arrived late due to directional and elevator issues. The tour, guided by senior political communication major Alex Castillo, included a look at the classrooms in the Walker Building and the Fitness Center.

One student from the academy, Renecia Gunter, was surprised by the resources Emerson had to offer.

“Emerson has a lot of [athletic] equipment,” Gunter said. “I didn’t expect that; it’s really cool.”

Gunter is a junior in high school and a basketball player. She said if she were to attend Emerson, she would major in political communication to study law.

Brad Schoonmaker, an athletics associate at the BSA, said he sees college tours as one of the many ways for students in his program to gain knowledge about the benefits of a degree.

The program is in its second full year, according to Schoonmaker, with around 4,000 high school students from 19 different Boston public schools enrolled in its learning centers, called “Zones.”

“[The Zones are] just a hub of information, and a hub of support,” Schoonmaker said, “just trying to keep [students] eligible to play sports and on a path to success after high school.”

O’Brien said that he believes keeping eligibility for student athletes is one of the biggest struggles in inner-city schools. High school students are required to pass an equivalent of four year-long courses during the marking period prior to their athletic season, while undergraduate athletes in the NCAA must maintain at least a 1.7 GPA, depending on how many credits they are taking per semester, according to its website.

O’Brien said he has been helping the program for ever a year. He said he mentored other coaches, not only assisting in basketball matters, but also teaching them how to prepare their students for college.

“I still have contact with the high school coaches daily,” he said. “It has everything to do with me trying to support this program because I really believe it’s the right thing to do.”