The Berkeley Beacon • May 16, 2020 • https://berkeleybeacon.com/emerson-to-receive-22-million-in-marlboro-merger/ 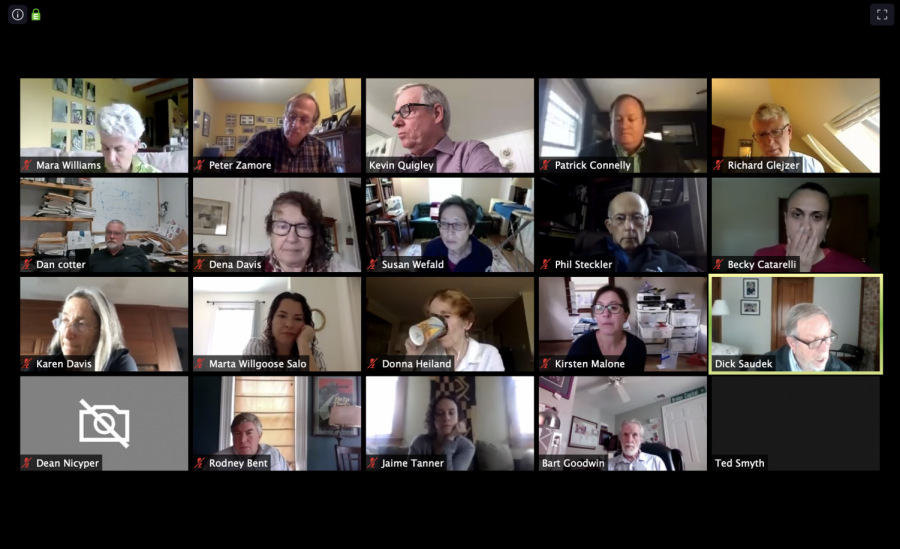 The Marlboro College Board of Trustees met over Zoom Saturday morning to discuss the merger deal.

Emerson College will receive only an estimated $22 million out of the estimated $27 million of Marlboro College’s endowment when the Emerson-Marlboro merger is complete, Marlboro officials said Saturday.

In a Marlboro Board of Trustees meeting held over Zoom, Treasurer Phil Steckler said that the college will not be giving Emerson its full endowment, but did not provide a reasoning for doing so. Marlboro President Kevin Quigley has previously told The Beacon that the Vermont college will use its endowment to pay off its debt—approximately $4 million according to the college’s 2018 990 tax forms—and pay severance packages to staff members. The remaining endowment will then be transferred to Emerson, which will be used to shore up the Institute for Liberal Arts and Interdisciplinary Studies and its faculty.

“The Campus Working Group met and considered various options and we’ve had Board discussions about [the sale],” Trustee Dean Nicyper said. “Unfortunately, while all of this is in progress, it’s all highly confidential.”

Nicyper said there should be more information regarding the sale released by the end of May or early June.

Marlboro sent a proposed curriculum for the Institute to Emerson in February, which is working its way through the curriculum approval process, according to the trustees.

In his remarks during the meeting, Quigley thanked the faculty at Marlboro for their work on the curriculum.

“I think objective observers of [the curriculum] see that it reflects really the quintessence of Marlboro,” he said.

Jamie Tanner, a professor of biology at Marlboro, said the curriculum was a team effort.

“There was a real appreciation and interest by the Emerson faculty in what we do at Marlboro,” she said. “And each time we met, they just, you know, kept remarking about how much they admired our curriculum and were excited about bringing it to Emerson.”

Board members also discussed the updated number of Marlboro students planning to enroll at Emerson this upcoming fall. Vice-Chair Kirsten A. Newcomer said that 92 Marlboro students are eligible to transfer to Emerson, with 32 students confirming their attendance. Newcomer said Marlboro expects that number to rise to between 45 and 50 students. Marlboro currently has 12 students transferring elsewhere and four taking time off. Newcomer did not clarify the decision of the remaining 44 students.

The Trustees also discussed what Marlboro’s options would be if the merger fell through. Board of Trustees Chair Dick Saudek said he believes that Marlboro would be forced to go into teach-out mode. Teach-out would involve not accepting any more students and teaching the remaining students at Marlboro until they graduate. Richard Glejzer, a literature professor at Marlboro, said maintaining accredited status with the New England Commission of Higher Education might be difficult, given the number of students Marlboro would lose to colleges other than Emerson.

“Many of our students who are not going to go Emerson have made commitments already to go elsewhere,” he said. “So the number of students that we would have in the fall would be relatively small. And my guess is that [New England Commission of Higher Education] would allow us to do a year teach-out with them and finish those students up within that year.”

The merger—which appears to be in its final stages—would see the remaining endowment from Marlboro and assets transfer to Emerson. The deal was originally slated to be finalized by May, with a legal document drafted by March, but Saudek said he thinks there will be one more Board meeting in June to finalize the deal. In return, Emerson will name the Institute for Liberal Arts and Interdisciplinary Studies after Marlboro, and the Institute will house the remaining Marlboro students as they finish their degrees in Boston.

Glejzer also discussed a plan for the Marlboro archives to be stored. Glejzer said that a deal has been signed with the University of Vermont to house the college’s archives and the Plans—physical versions of a senior thesis that Marlboro houses in its library.

“UVM has agreed to take our archives, that means they take all of the college’s historical data, our board minutes, our faculty minutes, all across since the very beginning,” he said. “The articles of incorporation, they take all the ephemera, photographs, everything that we’ve collected over the years about what made Marlboro special as part of the archive in addition to the historical piece.”

Glejzer added that any material in the library needed for professors going to Emerson will be sent to the Boston campus.

Charlie Hickman, who heads Selectboard—the governing body that runs Marlboro’s weekly Town Meetings—spoke in their remarks about the resilience of the Marlboro community through all of this.

“I like to point out that probably in part due to all of this upheaval, I have in my three years here never witnessed our community come together and be so mutually supportive as I did this year,” they said, reflecting on being the last Head Selectperson in Marlboro’s history. “I was looking forward to having this last semester on the hill and for all of us to be able to get on the lawn and cheer on our friends as they finish their orals. But instead, we sat in the Zoom room and cheered each other on from afar. I think that is indicative of the resiliency of our students to continue to come together and support one another, even though we are scattered across the country right now.”

Correction 05/17/20: A previous version of this article stated that Marlboro’s endowment was $37.6 million. This information was incorrect, and the article has been updated to reflect the correct endowment.