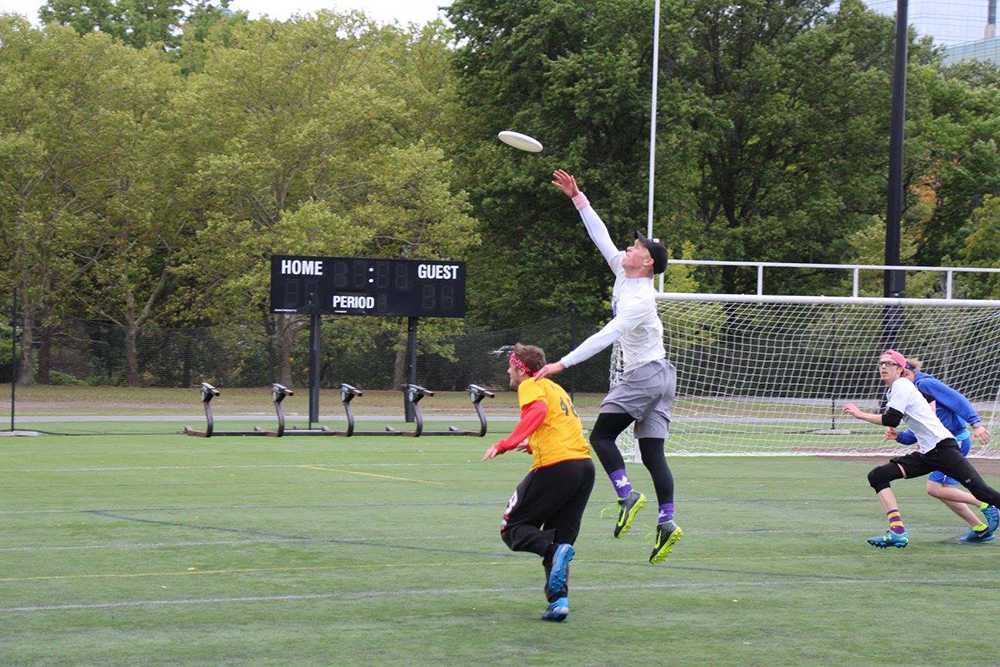 The Emerson College Ultimate Frisbee team is blazing an alternative trail in athletics, one that combines the physicality and dedication of an intramural sports program with a large amount of quirky fun.

Sophomores Noah Wisch, Jack Worth, Stig Regan, and Conner Carrico, all self-acclaimed “Ultimate frisbee majors that do visual and media arts too,” work together to head the team, also known as the Emerson Skunks, as coaches, captains, van drivers, and stretch leaders.

They all said they feel that ultimate frisbee is a misunderstood sport.

“The perception of ultimate is that it’s a bunch of hippies in the park with no shoes, throwing and running around,” Regan said, who also plays volleyball. “But we are very serious. It is physically demanding and requires work. We do love to have fun too, though.”

The main strategy of ultimate is to try and get the frisbee past the defense into the end zone at the far side of a field, similar to a touchdown in football. Throws can be in any direction, and one team can do so as many times as they want, but one must stay planted where they make a catch. They then have ten seconds to get another toss off or else the frisbee is turned over to the opponent. Points are earned when a catch is made in the end zone.

The four players said that in a sport that requires large amounts of teamwork, ECU has created something that can’t be recorded on a scoreboard: brotherhood.

“This is a very fun group of guys that I love to hang out with. I had missed being a part of a team, but now I am with the best team ever,” Carrico said.

“We consider ourselves to be number one in camaraderie here at Emerson,” Regan said. “We are really in sync. We have a lot of people from different backgrounds, a lot of people who have come a long way, and we have built up a lot of chemistry.”

Even though this is an official Emerson intramural program, which is a recreational organization, ECU hasn’t always been this successful. The previous year consisted of practices that involved throwing around with five or six people, according to Wisch.

“It was a slow start; a very long, rocky road,” Regan said.

According to Carrico, that long road had some reasoning behind it.

“We just weren’t picking up a lot of steam,” he said. “There were exams and other sports going on, and it just wasn’t working out very well.”

However, the returning players had a different strategy for the upcoming season.

Worth said that the major turning point for participation was this year’s Alternative Organization Fair. The methods used by the sophomores included circling the event with sign-up sheets, advertising the program in other parts of campus, and even parading up and down Boylston Street throwing 20-second informational pitches to any college student that happened to be passing by.

They reached 86 signatures by the end of the fair, Wisch said. Some answered very quickly after the event was over. A scrimmage was already scheduled, and Regan estimated that about 15 people showed up for it.

The team fell into place in no time.

“Lots of people began to come out consistently—I never thought it would get this real, this fast,” Carrico said.

ECU’s success was put on full display in their first game against Emmanuel College on Oct. 3, which resulted in a 15-10 win.

“We scored within the first 18 seconds of the game,” Wisch said. “We were very pumped up, very excited.”

Worth said that they even had more fans there than the home team did.

ECU then went on to beat Norwich University twice, 15-5 and 15-4, on Oct. 10, further proving their dominance on the field.

“People should continue to come out and support, because I think this is a sport that our school could really get into,” Carrico said.

ECU will be playing again at Emmanuel on Oct. 18. They will also be playing in Saratoga Springs, New York for the New England Classic Tournament on Nov. 7 and 8, which will consist of about 30 teams from big schools. They will then participate in the Division III conference in the spring, and their hope is to be in the top four, required to qualify for regionals in Amherst, Mass.

When the team isn’t traveling or playing games, they like to have fun together.

“We wear a lot of pink accessories for breast cancer awareness, and I wear a kilt for every game,” Regan said. “We took a field trip to the Garment District a few weeks ago.”

Worth, Wisch, and Carrico listed other shenanigans including intense games of charades, well-adorned social media pages, team dinners in the dining hall, and fundraising efforts like selling grilled cheese on the corner of Boylston and Tremont.

When asked why the Skunks, Regan smirked and shrugged.

Sports editor David Austin Bumpus, a former member of the team, did not edit or contribute to this report.