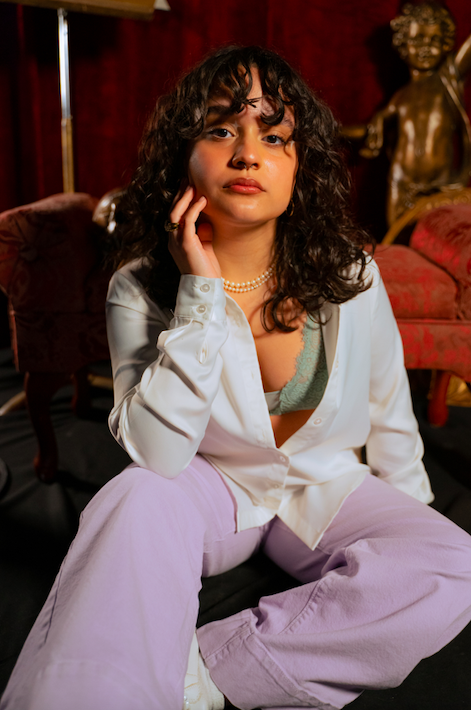 Held Friday, April 8 at 6 p.m. and 8 p.m. in the Semel Theatre, the troupe will perform 14 dances relating to their selected theme. EUDT prides itself in showcasing an intertwined narrative throughout various contemporary, hip hop, and tap pieces.

AV Justino-Isaac, first-year visual media arts student and EUDT’s treasurer, came up with the initial idea of seven deadly sins while walking through the city one day. The theme then evolved through a collaborative team effort.

“There was this thing I watched a few years ago called ‘Seven Deadly Sins’ and I was like, ‘Oh that would be dope,’” Justino-Isaac said. “In the meeting, Ally was like ‘Oh, there’s virtues that go with it,’ so that’s how it became ‘Vices and Virtues.’”

Junior visual media arts major Ally Hill serves as the Artistic Director and Production Manager, two prominent roles that oversee all things relating to the organization. Hill preps for the show by hosting a crew call, hiring, then preparing dancers in all three companies to perform their best.

“We have four rehearsals for each dance pretty much, we have reviews, and then we have an extensive tech week,” Hill said. “We have everyday leading up to our show preparing the dancers, getting run-throughs, dress rehearsals, things like that.”

For senior public relations major Rachel Lamarre, the Tap Director of EUDT will be her last show with the organization this spring. Her choreographed tap dance centers around the virtue of fortitude, exploring a concept of courage and bravery through rhythmic movement.

Junior marketing student Kasey Douglas, the Contemporary Director, has put together a contemporary piece following the vice of lust. Set to the song “All Again,” the dance showcases an individual repeatedly going back to a person who’s no good for them.

“In the piece, there is one girl that continuously pops up doing little solo parts,” Douglas said. “She’s the girl who wants to keep going back to that person, but her friends are trying to support her and try to convince her she doesn’t need that, she doesn’t want to do it all over again. At the end, she finally convinces herself and sticks to what her friends are saying.”

Along with partner Amanda Hunt, Justino-Isaac is doing a hip-hop-styled piece exploring the vice of pride. Though not as deep-rooted in meaning as some of their peers, the pair have had a thrilling time creating a dance with faceted talent.

“We chose a song called ‘Forbes’ by G-Eazy and ‘Press’ by Cardi B,” Justino-Isaac said. “Ours is just a piece about being cocky and being like ‘I’m the shit.’ That’s our vibe.”

In the past two weeks leading up to the show weekend, Instagram accounts of EUDT members have flooded feeds with gorgeous photos from the show’s promotional shoot. Shot by photographer Carys Hirawady, the portrait-esque photos feature a more stylized notion, balancing bright colors of the individuals with the darkness of the background. Marketing Directors Daphne Bryant and Hunt helped create the visual aspect of the photoshoot.

Hill and fellow choreographer Therese Lourdes Labordo produced this semester’s video shoot, building anticipation for the show. Closely tying in with the show’s theme, the promo was set in a church, an unusual spot yet making for an enjoyable experience for everyone involved.

“We were able to take parts and pieces from different company pieces and have everyone together in a space showing off a little bit of what’s going to be in the show,” Hill said. “It’s one of the first semesters we did all three things again leading up to the show, so it was pretty cool to have that.”

Members of the A-board, dancers, and choreographers alike are reeling with excitement for the spring 2022 performance. Though a busy week of preparation, Hill said the build-up has been fun and leads to more anticipation, including the potential audience.

“It’s going to be one of the best EUDT shows that has ever happened,” Hill said. “Also, for a lot of our members, it’s the first time that they will have done a show with us, so it’s exciting to bring everyone into our little family bubble and go through tech week together.”

After dancing with EUDT for eight semesters, Lamarre echoed the sentiment of “Vices and Virtues” being one of their strongest shows. It’s come full circle seeing people enter the organization just as she exits.

“I loved seeing everybody that’s come into our company and seeing how it’s grown,” Lamarre said. “We have people doing their first show with us and people who are choreographing for the first time. It’s going to be a really great show.”

Tickets for the 6 p.m. can still be purchased online through the link on EUDT’s Instagram page, @emersonurbandance. Prices are $5 for Emerson community members and $7 for outside guests.