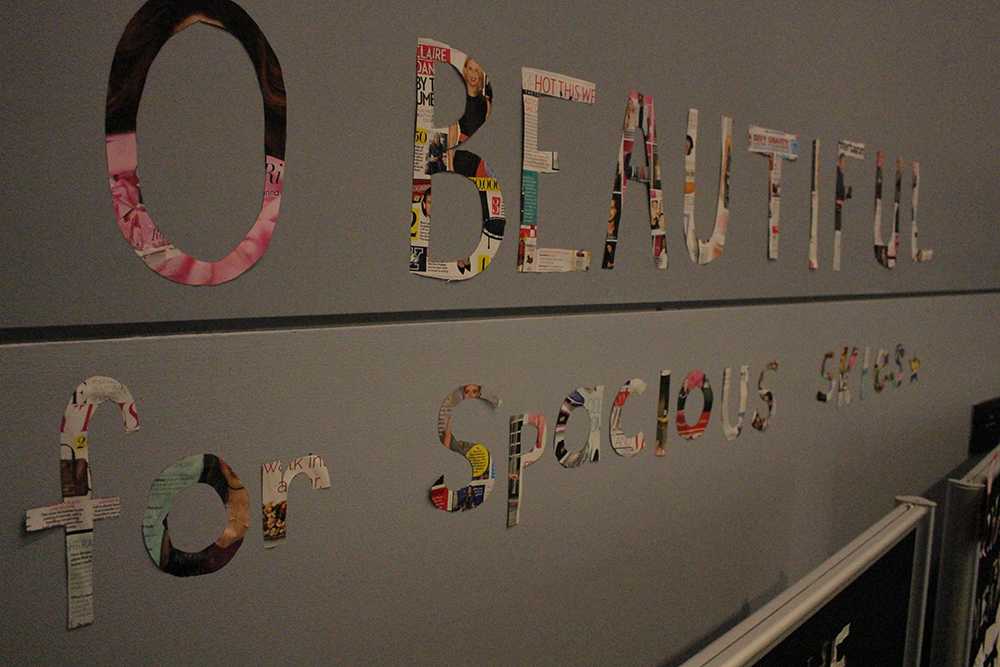 The distant yet familiar words “O beautiful, for spacious skies” can open both our hearts and our history textbooks, prompting us to look back on our country’s humble beginnings. However, when the world outside the text is governed by confusion, anger, and hatred, it may take the advice of the Founding Fathers themselves to remind us that not everything can be done by the book.

Emerson Stage’s production of “O Beautiful” by Theresa Rebeck depicts a community set in Selbyville, Delaware, that has been shaken by tragedy. They say it takes a village to raise a child, but when one of the town’s own teenagers is driven to suicide by neighborhood bullies, the morals of every citizen are brought into question.

When historical and religious figures such as Alexander Hamilton, Joan of Arc, and even Jesus Christ, return to walk amongst the citizens of Selbyville, the town finds solace in the most unexpected way. A story of racism, rape, retaliation, and rights, “O Beautiful” brings to light much of the controversy America faces today.

Directed by Benny Sato Ambush, “O Beautiful” has been in rehearsal since August, with conceptual and dramaturgical work beginning as early as April. The show ran last week in Emerson’s Greene Theater.

“I would say just about every hot button issue that both young people and our country are dealing with is in this play,” the EmStage Producing Director said. “You would think that Theresa wrote this just this morning, out of today’s headlines.”

“O Beautiful” has quickly gained relevance in America since the time it was written in 2011. Many of the students involved in the production found the message of the play to be even more powerful in light of recent events. The cast made the decision to dedicate their performance to the victims and survivors of the shooting at Umpqua Community College in Oregon.

Cast member Mary Krantz, a senior performing arts major, said she felt that the heartbreak her character Linda faced after the death of her son resonated with the recent tragedy.

“What really sticks out to me is when Linda has to watch people who she thought were her friends make choices that are full of hate,” Krantz said. “When you are in a situation of trauma or stress, you are just not yourself.”

In the play’s staging of the trauma endured in Selbyville, many of the actors said they played characters that could be seen as their polar opposites. Senior performing arts major Sam Terry said he initially felt hesitant about his role of Don Fletcher, a stereotypical school bully.

“I felt dubious going into the process about why we were doing this play here, and what it would be bringing to Emerson’s generally liberal student body,” Terry said. “However, as we got into the rehearsal process, we were able to give life and soul to the script. I started to realize that there are real people going through these things the characters are going through.”

Throughout the rehearsal process, the content of the play challenged and engaged the cast because it required members to consider not only today’s America, but the America of the past.

“Working on this play was like taking a crash history course,” Ambush said. “We had to do quite a tremendous amount of dramaturgical research to more fully understand not only who these historical characters are, but the historical times they lived in, and the activities involved in the forming of this nation.”

Their research and preparation came into full scope in the talkback held after the matinee performance on Saturday. Dramaturg Beth Gilchrist and the cast of “O Beautiful” invited the audience to stay after the show and participate in a conversation about what they had just seen.

Sophomore performing arts major Lyndsay Tucker gave insight to the issues at hand both in her performance as Jesus Christ and in her comments during the talkback.

“I think it will leave the Emerson community with a different take on the way we talk about controversy,” Tucker said. “We are often so quick to jump the gun when it comes to controversial issues without thinking of the other side.”