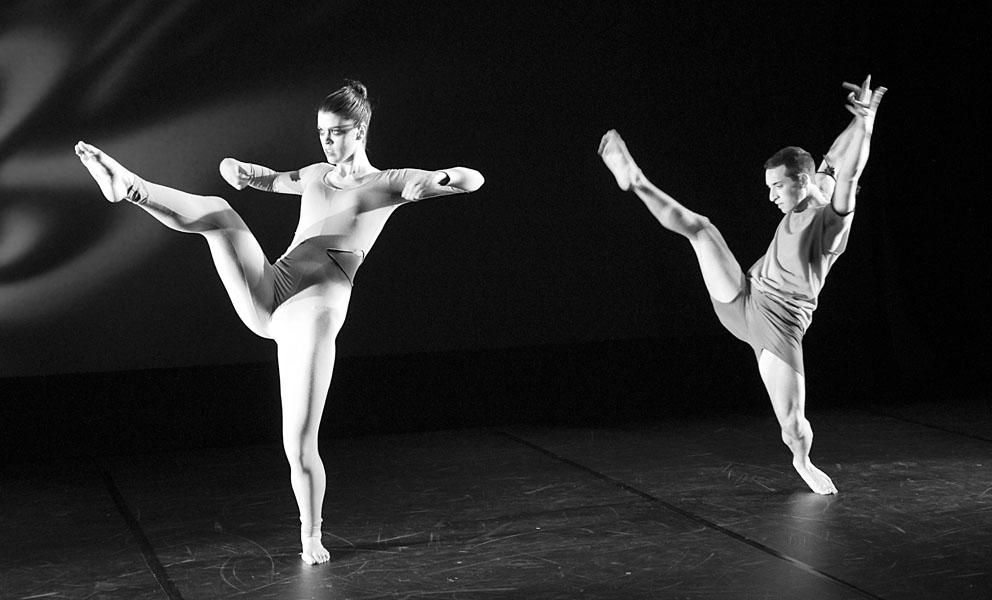 Five dancers stand perfectly aligned at the front of the stage, motionless and silent. Suddenly, they snap their heads to the right, in a rippling fashion. So begins this year’s production of X Dance.

The annual spring dance show premieres tonight at 8:00 p.m. in the Greene Theater in the Tufte Center. Run by artistic director Marlena Yannetti and hosted by Emerson Stage, X Dance features student choreographers selected by Yannetti to create pieces that evoke emotion through movement and technique. This year, five students were chosen, each with pieces that run about 10 to 15 minutes long.

There’s a twist — the performances were conceived of and crafted independently of one another. The routines are totally individual, each practiced at separate times, on each team’s own terms.  In essence, X Dance is a showcase of expression that unites students with ambitions to convey ideas — in five detached ways.

Choreographers had only to submit a plot and a concept for consideration. The routines were then crafted not only by the choreographers, but by the dancers as well.  As a result, each choreographer and his or her team had full freedom when it came to their slice of the X Dance show. The lassiez-faire nature of the production allowed students to experiment with their own creativity in intimate groups.

“X Dance is a safe place for the most collaboration possible,” said choreographer Wynn Harrison, a senior broadcast journalism major. “It’s a place for danger, a place where you can trust your most creative instincts … My dancers have completely transformed the piece. The idea we’ve started with has come so far.”

Despite the separation of groups, Kameron Tarlow said he sees a thread that connects the pieces.

“This year definitely has a strong theme of discovery,” said Tarlow, a theater education major. “Whether it’s what the world can mean, or truth, or power, or a woman who’s suffered from Alzheimer’s.”

Tarlow’s piece “Picture Perfect” incorporates gestures and frequent  physical interaction between the dancers. A diverse musical range, everything from rhythmic to staccato, plays during the performance in order to guide the audience through the complex ideas behind the dance. The piece aims to explore the realities behind “all-American families” and emphasizes that imperfection can bring us together.

Another piece, written by senior Janet Mullen, a theater education major, confronts the passing of her grandmother, Rose, who was diagnosed with Alzheimer’s when Mullen was in middle school. Much of what she learned about her grandmother was from her mother’s memory.

Her cast is composed of three dancers who represent members of her own family: her grandmother, her mother, and herself. The piece includes “You are My Sunshine,” a song that Rose remembered throughout her battle with Alzheimer’s, and even excerpts from her eulogy, which begins and concludes the piece.

Harrison’s piece follows a U.S. citizen through his struggles to understand and appreciate his country, as well as his role in it. Each performer represented a perspective of the journey. Harrison and her team incorporated recordings of historical speeches and a slam poetry recording.

Junior theater education major Tyler Catanella’s dance kicks off the night with an exploration of peace and truth that can be found in silence. Ashley Maietta, a junior broadcast journalism major, centered her dance around the idea of discovering oneself and rejecting conformity.

However, several contributors to X Dance pressed that any reaction or understanding to a piece is valid — welcome, even.

“I believe that you come to a performance just as you would come to a piece of art,” said Yannetti, “with your own perspective.”

Correction: Due to editing errors, in a previous version of this article, Kameron Tarlow was identified as “she” and Ashley Maietta’s name was misspelled in the photo caption. The article also said that this year they separated the groups of performers, but that is not a new element of the production.