Entrepreneur alum has cold-brewed business down to a tea 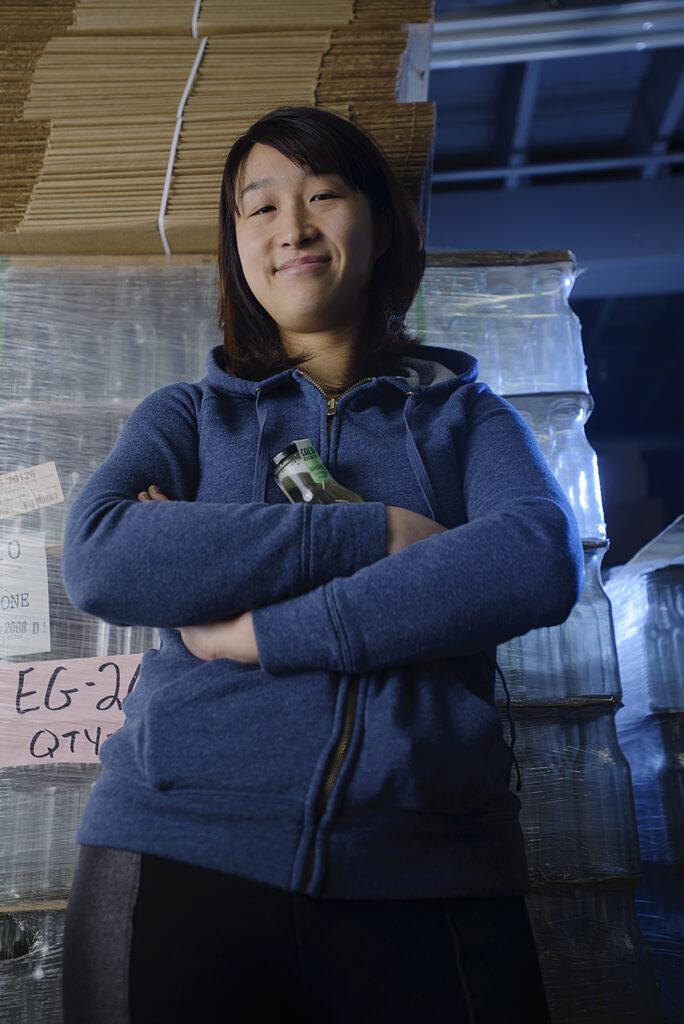 Evy Chen’s hands have become accustomed to burns from both boiling and freezing temperatures—all for the sake of her tea product, EvyTea.

Chen, who graduated from Emerson in 2011, is founder and CEO of EvyTea, among the first cold-brewed tea brands in the U.S.

She was featured on Zagat’s 2014 list of the 30 top figures under 30 years old in the Boston dining scene, and, in 2013, on Boston.com as one of the top 25 innovators under 25. Available in Meyer lemon and basil, peach and ginger, Earl Grey with vanilla, and other seasonal flavors, EvyTea is just under $3.00 a bottle, and, since 2012, can be found at Whole Foods.

The idea behind EvyTea started at Emerson. When she entered college, Chen said she was unsure of her career trajectory, but in her senior year, decided to enter the yearlong Emerson Experience in Entrepreneurship, or E3, program. Chen credits E3’s founding director, Karl Baehr, who passed away in 2013, as her earliest mentor in entrepreneurship.

“The whole idea started off with how horrible the U.S. tea market was,” she said, “so I presented an idea to start sort of a tea version of Starbucks, much like Teavana.”

Her proposal at the time was for a restaurant called Egerton Tea House, which would focus on serving quality teas. That year, 2010, Chen won the annual E3 Expo—where students in the program exhibit the businesses they developed—earning $5,000 in prizes. Thirty percent of the E3 program graduates have pursued their own businesses after graduation, according to current director Lu Ann Reeb.

Chen, too, wanted to continue her business after graduation, realizing that her day job at a marketing agency wasn’t the right fit for her.

“Everybody around me went to a marketing agency, big or small, so, I went and got myself a marketing agency job,” Chen said. “I walked into the office and did what I was asked to do for a little while, and it was really torture. Every minute that I was there, my mind was somewhere else.”

While working her marketing job, Chen said she continued doing research in the tea market, discovering an untapped segment for cold-brewed beverages. She also discovered why so many teas being sold in stores at the time tasted terrible to her.

Chen then discussed her plan to create a fresh, cold-brewed tea brand with her parents, friends, and boyfriend at the time, who all cautioned her against it. To gauge her idea’s potential for success rate, she started a campaign on the fundraising website Kickstarter to see if anyone would invest. At the time, her product was called Tea Cuvee. She exceeded her goal of $7,500, ultimately raising $8,240.

From there, Chen said, she found the process of building a business was not nearly as glamorous as it may seem.

Trials of the trade

A new graduate with limited funds, she leapt at each opportunity available to her, including the chance in 2012 to tag along to the Fancy Food Show, a major annual industry fair. Claiming only a corner of a friend’s larger booth, Chen set up her 20-bottle sample batch—with no set recipe—among masses of buyers and industry professionals.

“I just smiled and tried to pour tea for everybody,” said Chen. “I poured so many samples that my arm was sore.”

She left the show with an offer from Whole Foods, landing her bottled tea on shelves next to established brands like Tazo.

Chen rebranded her company later in 2012 with the name EvyTea, which she said gave her product a more personal image.

“People connect with your product one way or another,” said Chen. “People want to know if there’s a story behind the brand.”

From there, she continued to host demonstrations to gain feedback and perfect her teas.

“To me, that’s the hard way of finding out whether people like your product or not,” she said. “When it doesn’t taste good to them, their face can’t lie. They’re not going to chug the whole bottle and be like, ‘This is delicious,’ while they absolutely hate it. So they’re honest.”

Chen said she hit a snag, however, on her search to find a company that would mass produce her cold-brewed product for her.

“Most facilities told me that they wouldn’t make my products for me, just because it’s never been done before,” Chen said.

This is because cold brewing involves steeping whole leaf tea over a 16-hour period, rather than heating it quickly and leaving it bitter. This process, Chen said, yields a smoother taste, lower amounts of caffeine, and higher levels of antioxidants. But most tea companies have their products made out of state and shipped back—a process not conducive to her fresh tea model.

Taking EvyTea to the top—and the shelves

Today, EvyTea is available at over 20 natural-food retailers and Boston Common Coffee Co., Chen said, but not currently at any Emerson eateries.  Chen said that sometimes, while in Whole Foods, she pauses to watch and see who picks up her product.

Ultimately, Chen said it made the most sense for her to bottle the tea herself.

“I’m proud in the sense that when I put my name on the bottle, it actually means something to people,” she said. “I touch every bottle that goes out.”

Chen said that she and three other employees have spent the last year bottling the tea at a Dorchester Avenue facility in South Boston.

“It takes every single little bit in you [when] you’re the only person in the production facility making bottles,” said Chen. “But us [entrepreneurs] living this lifestyle, loving and hating it, we probably wouldn’t have it any other way.”