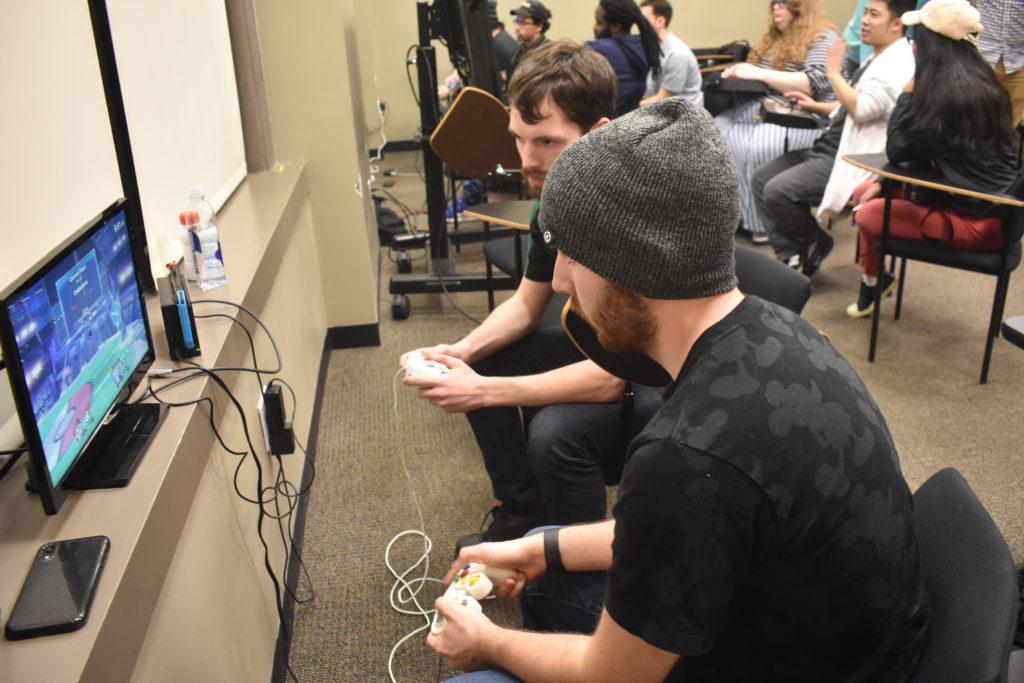 Robert Wilson (right), who goes by the username "BobbyWasabi," is the head of events at Emerson Esports. Photo by Abbey Finn / Beacon Correspondent

The Emerson Esports organization hosted its 49th weekly gaming tournament on Friday from 6 p.m. until midnight in room 209 of the Walker Building.

“Fight Club” began as a weekly event two years ago. Players sign up to put their skills to the test in four or more fighting games against Emerson and local players. The tournament is open to Emerson students and to the public to compete in for free.

Leet Wong, a recent graduate and former Esports organization president for the University of Massachusetts Amherst, earned the first seed in this week’s “Super Smash Bros.” tournament because of his recent performances in other matchups.

Wong said he did not intend to play in Friday night’s tournament, but the organizers wanted him to make an appearance in the bracket because he added more competition.

In an interview after his first one-on-one win in “Super Smash Bros.” of the night, Wong said he had not been able to get home after work so he stopped by the event to hang out in an environment he felt comfortable in.

“I don’t know how long the tournament will be because I’m just here to hang out for a bit,” Wong said. “There’s a fire holding up the Blue Line and that’s how I get home. I just got out of work and I’m not as prepared as I want to be right now, but I think I’ll do fine. As long as there’s a nice and chill environment, I’m on board.”

On Sunday, March 17 the Emerson Esports Organization and the Emerson Fighting Club will host a collegiate “Super Smash Bros.” tournament featuring the top 92 players in the Greater Boston area in the Bill Bordy Theater. This week of “Fight Club” focused primarily on getting competitors prepared for the tough tournament on Sunday.

Staton, who goes by the username “Pilgrim,” is a recent graduate from Bridgewater State University and an English teacher at a Boston alternative high school.

Staton said Friday night was his first time attending an Emerson Esports event and that he enjoyed the competitive atmosphere.

“I started playing [“Super Smash Bros.”] in college and met everyone here tonight through the game,” Staton said. “I usually go to the weekly [tournament] in my town and I hadn’t been here yet.”

Clarification: A previous version of this article stated that the weekly “Super Smash Bros.” event was titled “Fight Night.” The Beacon has changed the term to “Fight Club” in the headline and story.