Esports team remains hopeful for the future after tournament loss 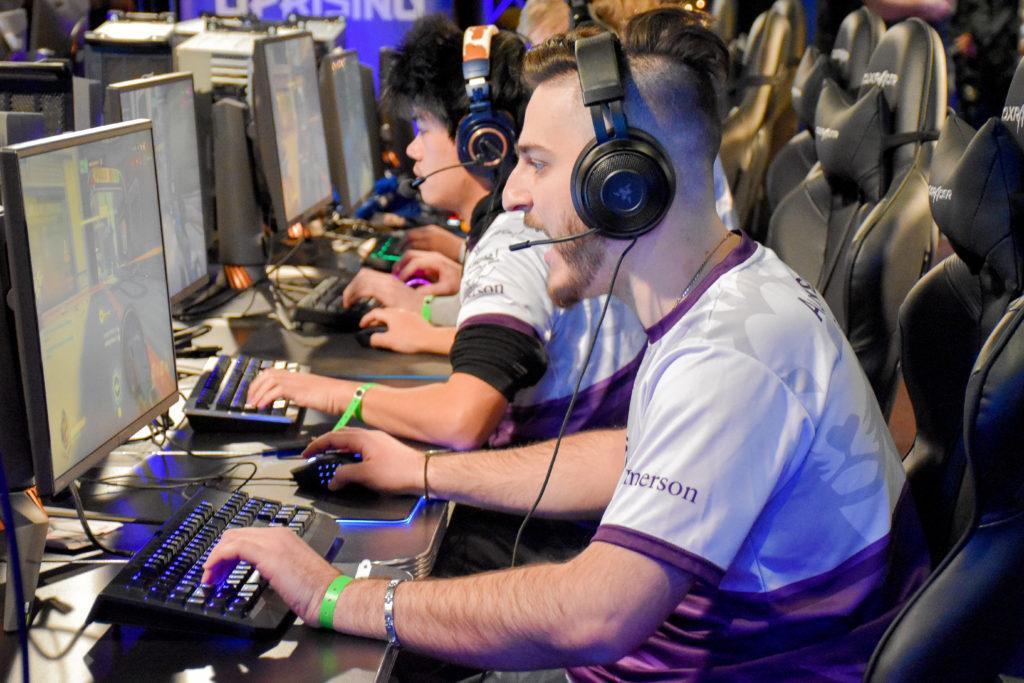 The Emerson College Esports 'Overwatch' team lost to Northeastern 2-0 in the first round. Photo by Anissa Gardizy / Beacon Staff

The Emerson Esports “Overwatch” team lost in the first round of the Boston Uprising Collegiate Cup tournament on Dec. 8 against first-seeded Northeastern University.

The “Overwatch” team competed together for over a year prior, but this marked their first professional-style tournament. The organization previously hosted a video game tournament in the Bill Bordy Theater on April 5.

Junior team captain George Capalbo, who goes by the username “Stormyness,” said the most important takeaway from their loss against Northeastern is the experience gained in their first on-stage tournament.

Four teams qualified for the Boston Uprising Collegiate Cup. Each matchup consisted of best-of-three games to determine the winner.

Emerson lost to Northeastern 2-0 in the first match of the day, and both games ended in lopsided victory for the Huskies.

Emerson departed from the tournament just 30 minutes after entering it, but Capalbo said qualifying for the Collegiate Cup boosted interest in esports as a whole in students and school staff.

“Obviously, today was not the result we wanted, but I think next time we go into a tournament we’ll be much better,” Capalbo said. “We’re getting coaches, we’re putting in practices, and the big thing is getting support from everyone involved at the school. I know the school has an esports program, and having their support is just really essential to our success.”

Associate Professor and Chair Department of Communication Studies Gregory Payne attended the event and said he knows many Emerson alumni with successful careers in the field of esports.

“Emerson has been very pioneering—we are one of the few schools that have esports in the curriculum,” Payne said. “When you look around the world, we have Emerson students who actually have some very exciting leadership positions in esports.”

Payne also said the college pays close attention to the esports scene as a whole. He said Emerson plans to expand its offered courses on the subject to meet the demands of students and the growing industry.

Junior John Lyons, who goes by the username “Karzon,” said he remains hopeful for the future of the team and looks forward to upcoming tournaments despite the disappointing results of the Collegiate Cup.

“We played our best, but Northeastern out-skilled us. It shows that we still have room for improvement and that we can keep going,” Lyons said. “Our next big tournament coming up is the Tespa spring semester series where we play for scholarship money, so if we practice more and keep playing as a team, I think we will be able to do better than we did today.”