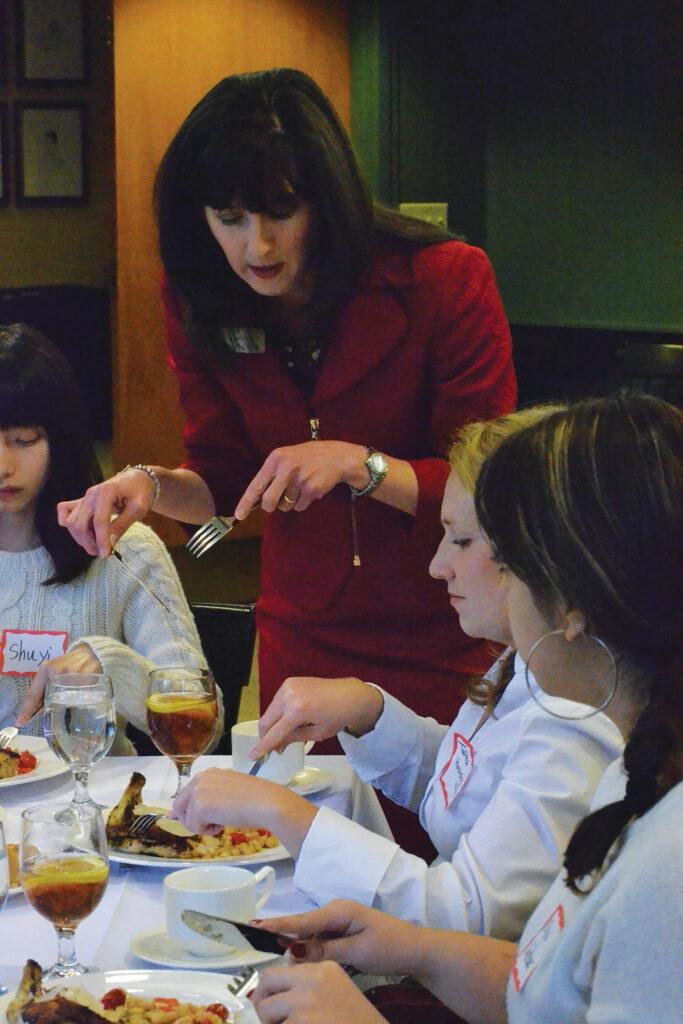 Etiquette education has the stereotype of being boring and stuffy, and it  reminds everyone about grandmothers who would shoot “the look” whenever elbows were placed on the table. When Jodi Smith, president and owner of Mannersmith Etiquette Consulting, was working in human resources before starting her company in 1996, she held New Skills for Emerging Leaders workshops—never etiquette workshops, fearing that no one would show up.

In the Charles Beard Room on Monday evening, Smith used flair and humor to instruct students during Networking and Dining, an event hosted by Career Services. Students were invited to share a meal together and eat, sit, and behave as if it was a job interview or other professional opportunity. Wearing a red suit with modest chocolate brown pumps and hair perfectly coiffed, Smith looked every part the professional consultant she is, but let loose by cracking a few jokes and encouraging participation from the audience of 19 students.

Smith, who has written two etiquette books and has appeared on NBC’s Today Show and ABC’s Good Morning America, started the students off with an easy question: “Can you point to your own water glass?”

“One year ago or so, I was at a dinner, and someone took a sip from my water glass,” she said. “I didn’t say anything because I didn’t want to embarrass this person.”

Spector seemed glad to have sorted this out early on in the evening’s program. After learning about proper napkin placement—fold it in a rectangle with the fold going toward your knees— the salad course began.

The salad was a perpetual minefield of awkwardly shaped items that seemed likely to leap off the plate if stabbed with a fork. The students were very stiff at first, after becoming acutely aware of every move they made. They ate slowly as Smith explained how to pick up the black olive with the fork while holding a knife behind the olive for support, sparing oneself the disaster of flying food. She walked around the room and found a sliver of red onion on someone’s table.

“Don’t put this on your bread plate,” Smith noted answering a question about what to do about spilled food. “The bread plate is not a Siberia for unwanted food.”

Cucumber and tomato wedges were to be cut in half into bite-sized pieces before consumption, and julienned carrots were hitchhikers that the lettuce picks up on the way to your mouth. The following courses; chicken with white beans and chocolate cake with coffee, also had guidelines on how to cut, scoop, and stir in a mindful way.

Attendees like junior Andrea Olalia came with an arsenal full of their own potential faux-pas questions.

“She told us you aren’t supposed to add anything to the table,” the print and multimedia journalism major said. “That was one of my questions, what if you’re seated and you order drinks at the bar before? I’ve gone to a few marketing events where people are just moseying around with drinks before the dinner.”

Smith told Olalia that most restaurants don’t want patrons walking about with glass objects anyway, so someone should be over to whisk your drinks away from the bar and deliver them to your table after you’ve been seated.

During the course of the meal, Smith took questions from the group about everything from telling the waiter politely that there’s a hair in the salad to how to properly twirl pasta (don’t ever order stringy pasta on a first date or business dinner, Smith advised), and how to deal with spilling something all over the table.

“Don’t burst into tears,” Smith said. “Crying won’t help get you the job.”

If there is a red-wine-on-the-crisp-white-shirt situation, most restaurants have an extra white collared shirt in the back ready for moments like this. At least at the type of restaurants where you’ll be having a business-related meal, not a T.G.I. Friday’s. Smith suggests rolling up the ruined shirt and telling the waiter to hold it at the maître d’ stand so you can pick it up on the way out. Then you style the generic white shirt by tucking it in or rolling up the sleeves, and rejoin the table. No freakouts, no tears. Smith gently reminded the mechanical diners not to worry about making mistakes.

“Etiquette is not about being perfect,” she said. “I think perfect is a little too plastic.”

For the two hours worth of advice she gave, Smith said she wanted the group to walk out with two basic principles in mind: follow the leader and don’t gross anyone out. Following the leader means following the host who invited you to dinner in the first place. If he or she orders a glass of wine, you can feel free to do so. If he or she  recommends the lobster bisque and the crème brûlée, know that there will be three courses. The leader pays regardless of gender; in the business world, it’s all about rank.

Smith also emphasized that etiquette evolves and alters as our world changes. The rules of days past where you never asked for salt at someone’s home because salt was more expensive than pepper have gone away. But there is still a feeling that every generation is declining in the manners department.  In turn, young people don’t feel confident enough about their abilities to navigate a potentially tricky social or professional situation.

“Whenever I’m with anyone a generation or so older than me, I feel uncomfortable,” said Tabitha Hernandez, an attendee and a senior communication disorders major. “This event helps create a bridge. It goes deeper than just etiquette, the small social skills mean something bigger.”

Hernandez said how you eat can determine a lot about your personality, and it can show how mindful you are of others around you—a major perk in the professional world.

Aside from the technical things—posture, napkin placement, and the proper way to hold utensils—social cues like proper topics of conversation were also discussed. Something that hasn’t changed in etiquette is the rules of discussion of religion, politics, and sex in polite company. Just because it’s 2012, don’t think you can start discussing how the Christian GOP presidential hopefuls seem determined to cut funding to Planned Parenthood.

Spector, who participated with the rest of the group, said she gets good feedback on this event. It has therefore become an annual affair four years running.

“People don’t really have traditional dinners at their grandmother’s house anymore,” she said of where manners are typically learned. “Events like this are important so students can feel more confident and be prepared.”