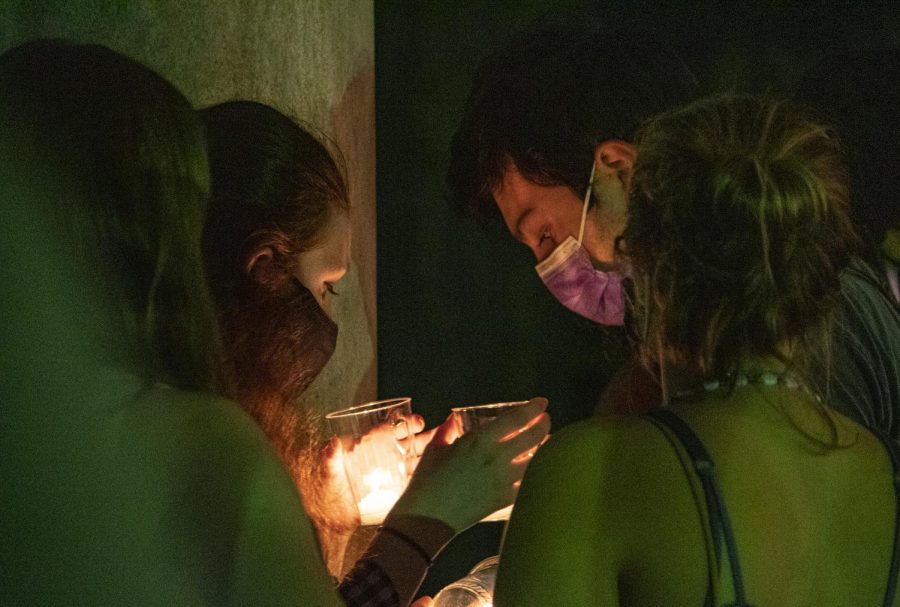 Students lighting candles to honor the victims of the 9/11 attacks.

On the evening of Sept. 11, several dozen individuals gathered in darkness under the Boston Common bandstand, to remember the lives lost twenty years ago during the 9/11 terrorist attacks that shocked Emerson and the world.

Standing in a circle along the railing, attendees lit candles and listened to speakers reflect on the legacy of the tragedy two decades later.

Among them was Sonia Tita Puopolo, an affiliated faculty member in the communication studies department. Puopolo, who graduated from Emerson in 1996, is the daughter of Sonia Mercedes Puopolo—a Board of Trustees member who was on the first flight to hit the towers.

“My mother was killed on September 11 on American Airlines Flight 11—sitting two seats away from Mohammed Atta, the onboard leader of the terrorist attacks,” she said. “It was horrific. The pain was horrific.”

Despite the magnitude of her loss, Puopolo said that the tragedy—like all “9-1-1 moments,” as she called them—also provided a unique opportunity for self-reflection and even growth.

“If we can use the 9/11 attacks as a metaphor for life, then let us understand that life is full of struggles or difficult times,” she said. “The real question is, ‘How are you going to get through them?’”

The vigil was organized by Communication Studies Department Chair Gregory Payne in conjunction with the Emerson Communications, Politics, and Law Association. Held both in-person and virtually due to the constraints of the pandemic, the event honored the nearly-3,000 individuals that were killed that day—including three Emerson community members.

“This vigil is an opportunity for us to honor and reflect on everything that has changed for us as a country in the last 20 years,” School of Communications Dean Raul Reis said. “It’s also an opportunity to reflect on all the values that have not changed: our commitment to celebrate what [we] honor and to remember all the people who lost their lives that day.”

Puopolo introduced Robert Brown, also a communication studies professor at the college. Brown briefly acknowledged a former student of his at Salem State University, whose mother had been a flight attendant aboard Flight 11—noting that, even two decades later, families were still processing their grief in their own ways.

“Some dance to remember, some dance to forget,” he said, quoting “Hotel California” by Eagles. “Tita has been so public with it, and [my old student] Marianne has been very private. I am here to bear witness for her.”

In 2001, John Talanian was working at the Boston office of financial services firm Cantor Fitzgerald. Twenty years ago, he watched on television as all 658 employees of the firm’s corporate headquarters—including several of his closest friends—died as the North Tower collapsed.

Talanian recounted his struggle dealing with his trauma for several years afterwards—until 2007, when he was in the Boston Common and chanced upon an Emerson vigil.

“To each one of us, our story is the hardest because we lived, we know the pain,” he said, “But we also know the pain that the others are feeling; that’s how we can help heal each other, by having that empathy for each and every person who has gone through this experience or a similar experience.”

“Each year, I heal a little bit more,” Talanian added. “[The pain] doesn’t go away; we just learn to deal with it a little better. By sharing my story, I keep myself healthy. And in some ways I perhaps help others. To me, that’s important.”

Another student, senior visual and media arts major Vaughn Coleman, lost his father and his uncle—who both worked at Cantor Fitzgerald—during the attacks. Having just returned from New York, where he read several names at the Ground Zero ceremony, he ended his brief, sobering speech on an uplifting note.

“Every year, I think of a year my dad should have been there,” Coleman said. “The longer time goes by, the more permanent it becomes that this is it, this is a part of our lives. It’s part of history. You have to learn to accept it. I know every day my dad is with me in spirit—and everyone else we lost is there with us.”

As the speakers concluded, the candles—blown out by the cold September wind—were lit once again. Joe Nalieth, a sophomore theatre education and performance major, circled the bandstand playing the chords of “Stand By Me” on his guitar, as students came forward and placed their candles in the center of the circle.

By the end of the song, the candlelight illuminated the faces of the attendees for the first time in the entire evening—professors and students, first-years and seniors, gathered together in communion.