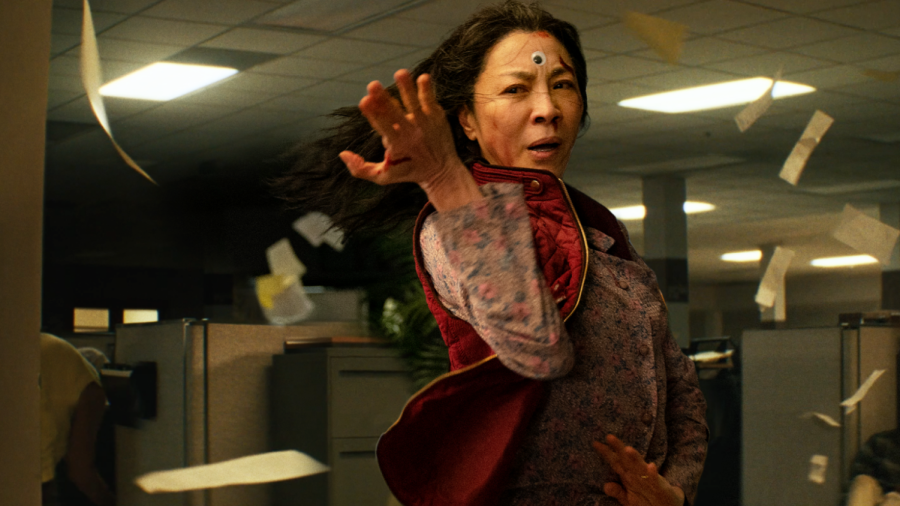 Michelle Yeoh as Evelyn Wang. Courtesy of A24.

Everything Everywhere All at Once is undoubtedly a masterpiece. Writers and directors Dan Kwan and Daniel Scheinert have leaped from the simple silliness and musings on confused love in Swiss Army Man to make viewers feel for everyone’s lovability.

Though splendid in all departments, it is the director and actor relationship that drives the meaning behind this film.

While the written word is certainly powerful, and this trait can be the key to successful drama, the beauty of this film is in its most silent moments of observation.

Kwan and Scheinert, alongside Michelle Yeoh, Ke Huy Quan, Stephanie Hsu, and James Hong, bring together a perfect example of the practice of showing versus telling the audience.

Yeoh plays Evelyn Wang, an overworked head-of-household whose bitterness is inspired by her self-perception of being composed of her failures. She is just on the horizon of meeting her greatest failures yet, both financially and familially.

This impending failure is interrupted by a multiverse traveling Quan, who plays Evelyn’s husband Waymond Wang. Yeoh and Quan complement each other as opposites with Quan being the silly father figure, countering Yeoh’s brashness.

Stephanie Hsu plays Joy Wang, the couple’s daughter. Hsu doubles as the story’s main antagonist, Jobu Tupaki. Joy and her grandfather, Gong Gong, work on opposite ends of Evelyn’s desire to maintain a relationship with both of them, to further burst her life into splinters.

The film ultimately resolves with the mending of fractured relationships between Evelyn, her father, and her daughter. The emotional payoff is sweetest, however, with characters who, for the sake of the main story arc, are intended to be more tertiary like Waymond and Jamie Lee Curtis’ Deirdre Beaubeirdra.

Much of Evelyn’s demeanor towards Waymond is spiteful, even before she is presented with Waymond’s desire to end their marriage, leaving the viewer with questions about the couple’s relationship that are answered later.

The center of the film strikes and Waymond, in a few words, begs for his wife and her adversaries to cease their newly discovered knack for violence. He assures the combatants that he understands their confusion and fear, but he is certain of one thing: they may find a grounding resolve through their trust in kindness.

Rather than further a soliloquy dedicated to his passion for his wife and faith in the effects of love, the film slows down as its actors go silent and the audience is presented with images of Waymond as Evelyn reflects on their marriage, transpiring throughout multiple realities.

This lack of exposition makes it so the audience cannot help but project the faces of their loved ones. They are coaxed into seeing their sunny memories of fondness with the ones they love over those of flashing fiction on the silver screen.

It is the subtle building of Yeoh and Quan’s tone, expressions, and overall delivery that provides the power of this punch.

Silence is broken when the couple are movie star versions of themselves, with Waymond telling Evelyn he would have been satisfied if they lived a life where they did laundry and taxes together, a reference to the main universe the film inhabits.

Evelyn sets down her arms, calmly turns to her husband, and says, “I’m learning to fight like you.” She moves forward in a fight scene, where she disarms her enemies by bringing them their greatest joy across the multiverse.

Moments like this are not exclusive to the married couple. Evelyn takes her lesson and extends her love.

Evelyn confronts her father with her acceptance of her daughter being a lesbian, tells Beaubeirdra that she is worthy of love, and assures Joy that of all the universes she could choose from, she wants to inhabit the one where they are together.

As the film finds its close, the audience is shown a woman whose heart has changed. She has learned to fight with love. She has learned that everyone, everywhere, is dealing with everything all at once, and the best thing people can do is put forth love and kindness.